Andy Samberg ‘wasn’t aware’ of YouTube before 2005, when he made ‘Lazy Sunday’ 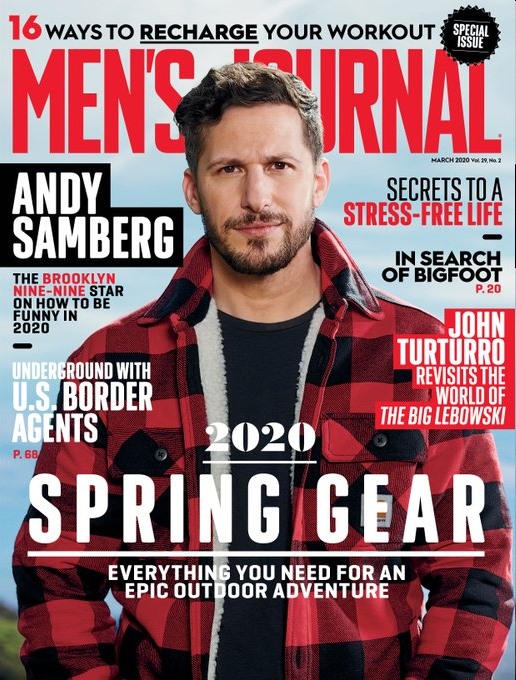 Because I rarely – if ever? – pay attention to Andy Samberg at a gossip-level, I was pleasantly surprised by his Men’s Journal cover story. Did you know that Andy is 41 years old, 42 in April? Did you know that he’s been married to Joanna Newsome since 2013? Did you know that they have a two-year-old daughter and they’ve never released their daughter’s name publicly, and Andy still won’t refer to his daughter by her name in the media? I didn’t know any of those things. I also didn’t realize that Samberg is actually quite… respected and well-liked by colleagues across the board. This Men’s Journal piece quotes several of his female coworkers, and they all are like “he’s a really woke ally to women.” And he still behaves like a big kid who is just happy to be here, so that’s nice. Anyway, you can read the full Men’s Journal cover story here. Some highlights:

He’s super-busy: He’s the star and producer of a long-running network sitcom (rare) that’s beloved by legit comedians (extremely rare) and professionally smart tastemakers like Lin-Manuel Miranda (unheard of). But he’s also quietly—and impressively—sent the elevator back down for the next generation of comics, executive producing two of the funniest (and oddest) streaming hits of the last year—Netflix’s I Think You Should Leave With Tim Robinson and Hulu’s PEN15. “I’ve been working so much,” he says. “Parenting is a f–k ton of energy and focus.” But here, on set, it’s different. “They gave me a haircut! And no one asked me to feed them!”

The now-infamous “Lazy Sunday” digital short on SNL in 2005: “We were not aware of YouTube until ‘Lazy Sunday.’” The morning after the short aired, Samberg got a call telling him it was all over the internet. “We’d had our own website with streaming capabilities. After ‘Lazy Sunday,’ we were like, ‘Why are we paying for bandwidth and sh-t?’ ”

Pitching the “3 Way” song to Lady Gaga: “She was definitely aware of ‘Dick in a Box’ and ‘Motherlover.’ It was really fun getting to pitch her. Like, ‘You’ll be in the Fly Girls outfits from In Living Color and the joke is, [Timberlake and I] clearly want to f–k each other and you’re just there.’ When we asked her, she was like, ‘I’m so honored.’”

His goal for Brooklyn Nine-Nine is to be funny in a nice way: “There are a lot of people who are like, ‘I like watching The Great British Bake-Off and Brooklyn Nine-Nine.’ You know what? I get that. I can totally see it. That’s kind of the big sell of Brooklyn Nine-Nine. It’s similar to Parks and Rec in that way. In many ways, it’s a utopia that doesn’t exist but that a lot of us would really wish to exist. It’s nice to live in that space.”

His daughter: They’ve never disclosed her name to the press, though they will reveal that the girl is currently obsessed with, of all things, Tchaikovsky’s The Nutcracker. “Someone gave us a book of The Nutcracker—you push the buttons and it plays snippets of the music. It’s all she wants to hear. We joke a lot about that. Like, I wonder which side of the family she gets that from?”

I’ll admit it, reading this interview sent me into a YouTube spiral, watching all of the Lonely Island-written and produced digital shorts for SNL. As much as I dislike Justin Timberlake, JT’s best work has always been on SNL and Samberg really brought out something special in JT and lots of other actors. I still think those Natalie Portman rapping shorts are some of her BEST work. Anyway… I liked this profile so much because I never thought much about whether Andy Samberg is genuinely a good person, and now I’m pretty sure he is. Good for him!

Our March cover shoot with @AndySamberg was almost too much fun. Take a look behind-the-scenes. pic.twitter.com/h0p8nuLcQl