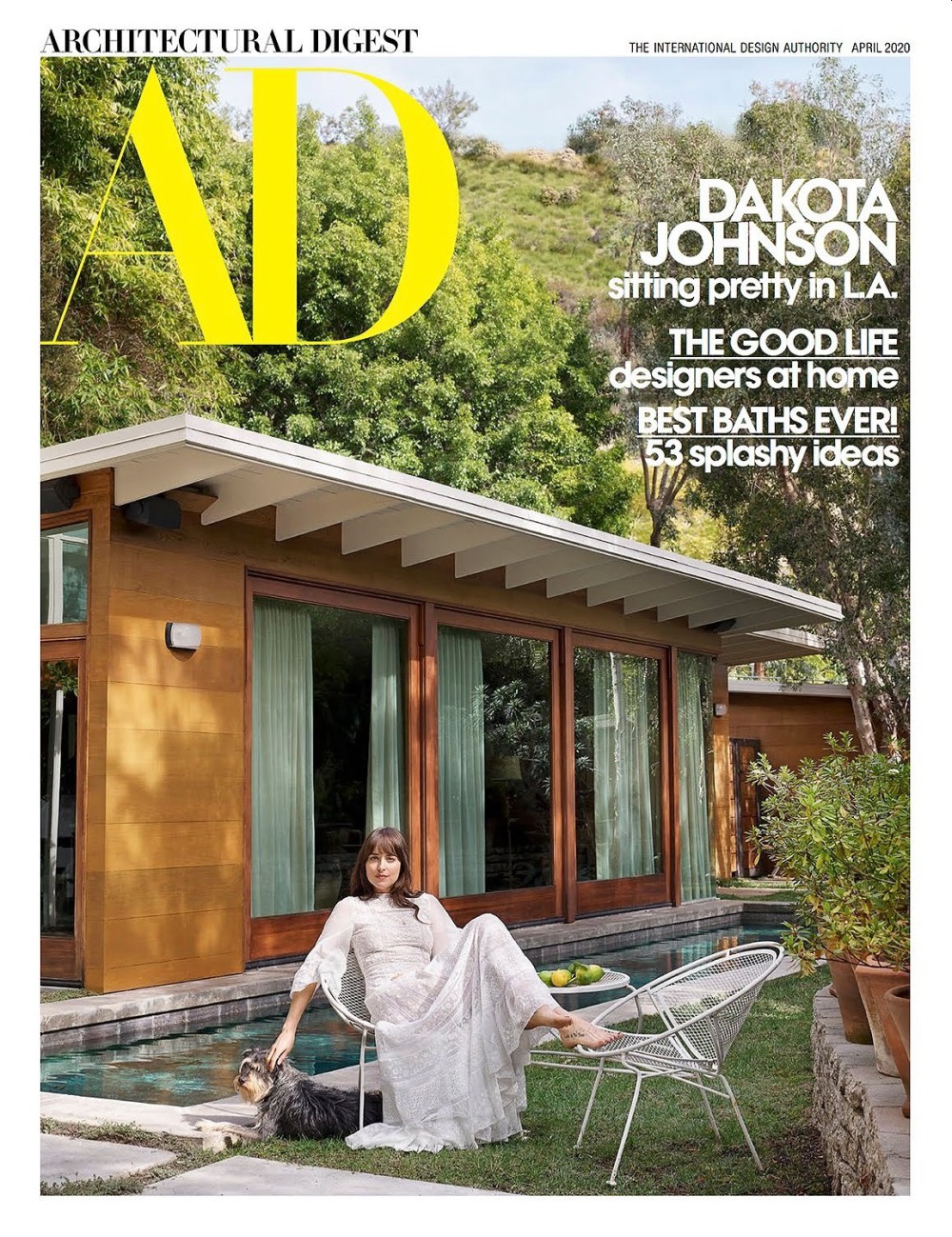 I’m exactly the kind of person who finds home-renovation shows relaxing. I know renovations are never relaxing for the people who actually have to go through it, but just watching a kitchen get redone or an entire cottage get an update, it just makes me happy. I’m not a Brad Pitt-esque architecture geek or anything, but I appreciate an expensive, well-made home or mansion, even if I question the cost and the need for all of that sh-t. Anyway, Dakota Johnson covers the latest issue of Architectural Digest and I found her LA home to be a complete surprise. I’m surprised because I really love her taste in decor and in architecture. Does her home have too much wood? Yes. But otherwise, it’s gorgeous. I love the simplicity of her green and white kitchen (she even has simple white subway tiles), I love all of her old, halfway faded rugs. And I love all of the sh-t she’s collected over the years. You can see the full cover package here. Some highlights from the interview:

The LA story of her home: The house was built by architect Carl Maston, and Johnson bought the residence four years ago, the second one that her realtor showed her on the single day she went to see L.A. properties. “I was immediately drawn to how it was clean but also cozy. I thought, I’ll never want to sell this place.” She also liked the backstory: “Maston was buddies with Lautner and Neutra, and they’d all go to Musso & Frank’s together because there was a hostess that they were all in love with. Carl ended up marrying her, and this was the house they lived in.”

She bought it with her first Fifty Shades paycheck: She admits one reason the first major purchase she made with her salary from the Fifty Shades of Grey trilogy, which she started filming when she was 24, was a place to put down roots: “I thought it would be healthy to have a base. And, at the very least, have one place where you know your stuff is, as opposed to 10 places.”

All of her stuff: “I guess I’ve had a big life already.” On a single shelf in her ground-floor office, she has the following framed memorabilia: a seating card Patti Smith gave her with her phone number on it; a photograph of writer Hunter S. Thompson, who was a close friend of her father’s; a note from Hedren signed, “Love, Mormor,” which is “grandmother” in Swedish…The most surreal memento: a photograph from her appearance on Saturday Night Live’s 40th-anniversary show in 2015, where she’s surrounded by Taylor Swift, Derek Jeter, Sarah Palin, Steven Spielberg, George Lucas, and 50 Cent. “Isn’t that the craziest photo of all time?” … The David Hockney piece in the master bedroom was a gift from Griffith, and in a cabinet in her living room is a vinyl record collection, which she sheepishly admits to having recently alphabetized.

She redid the bathroom: Her other two requirements for the master bath were a big tub and two separate vanities. “Candle, book, and a salt bath, every night I can. Also, I think the key to a healthy relationship is double sinks.”

Her anchor: “With my job and the velocity at which my schedule can change, it’s important for me to have a place to go to and it be mine. Psychologically, I’m moored somewhere. This place is my anchor.”

I like how casual she is about being third-generation Hollywood royalty. Chris Martin certainly… goes for a certain type, I guess, although I prefer Dakota and her energy. I do wonder why she’s showing off her home because she is, in fact, looking to sell and what that means. Chris and Dakota are still together and there’s always talk about how they could get married or have a baby. I wonder if Dakota is looking to get a bigger home? Because as beautiful as her little place is, it does seem very much like her cool (and small-ish) bachelorette pad.

Tucked around actress @dakotajohnson’s L.A. house are personal effects, including a David Hockney artwork in the master bedroom that was a gift from her mother @melaniegriffith. Custom throw pillows and a @gucci blanket decorate the vintage bed while a vintage sconce hangs above. See more of the home through the link in our profile. Photo by @simonuptonphotos; text by @derekblasberg; interior design by @pierceandward; styled by @mieketenhave