Gal Gadot: The pandemic is ‘horrible, frightening’ & a ‘blessing in disguise’ 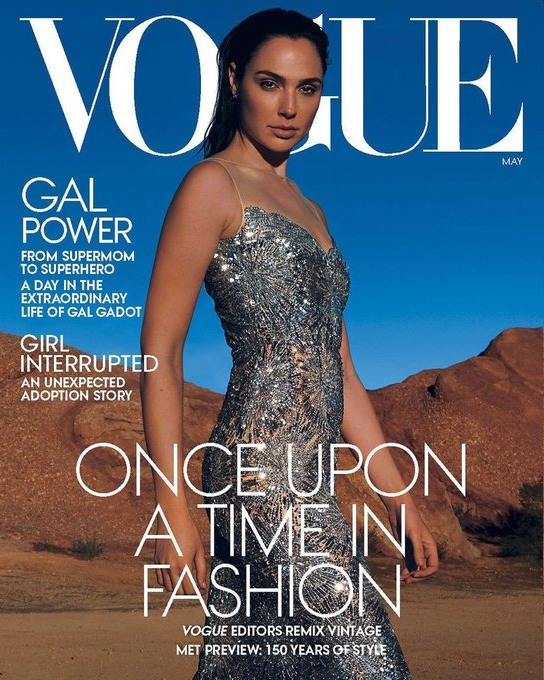 Just a reminder that we’re still getting magazine covers from the pre-quarantine era. Gal Gadot covers the May issue of Vogue because she was supposed to be promoting Wonder Woman: 1984, but the film got pushed back and the bulk of the interview was done months ago. Still, it was nice to see this cover and cover story. The cover is… a look. I feel bad that the image seems a bit off, but it’s not terrible and it’s not like Vogue did her dirty. You can see the full Vogue interview here. Some highlights:

Coming from Tel Aviv to LA: “I will always feel foreign in L.A.. You can’t walk anywhere here. You know what I like about home in Israel? Everything is five minutes away. Five minutes walking to the gelato place, five minutes to the beach, five minutes to our cousins’ house. And all of our neighbors are our friends. But there’s always give-and-take. How do you say in English? Eat the cake and leave it whole? Eat the cake and…. There’s something with a cake.”

She feels like she needs to be more than just an actress: “Just . . . inertia… We’re living in a world where everything is by titles: You are a writer; I am an actress. I don’t want to sound too New Age–y . . . but we’re always evolving and changing, and life happens and takes us in different directions. Yes, I am an actress, but at the same time, I have this appetite to do more—bigger, deeper, more interesting.”

Ambition & karma: “Yeah, I’m pretty ambitious. I’m not elbowy . . . if you say that here. But I’m a big believer in karma, and if it’s mine it’s mine, and if it’s not it’s not. I’m not fighting for things. But when I’m there, when I’m facing the opportunity, I’m completely onboard. I definitely make sure to be prepared, to do the work, to come in 100 percent and go for it.”

When she found out she booked Wonder Woman: She told her husband, “‘After I shoot the movie? I want us to have another baby.’ … It’s like the more successful I get, the more I want to plant my roots in and make sure everything is balanced and still focused on the important things in life, which, for me, is family.”

How she feels about the young female fans of WW: “They care. It had an effect on them; it meant something to them. And just because of that, I care for them, and I want to hear what they have to say. Often it’s about a profound effect that it’s had on their life. Usually it’s that it triggered them to make a change, to do something they would never do, to be courageous.”

Life in quarantine: “Obviously the circumstances are horrible and frightening, but we’re home and we’re trying to make the best of it—to enjoy the quality time. It’s so surreal. I’ve never been through times like these. But I’m also full of hope for when it will be behind us….We try to avoid watching the news when [the children are] around. So right now that’s the situation. We’re trying to enjoy the quality time that we have. The girls are not worried. They feel safe. I think the girls are going to grow up being able to tell their kids that they lived through the corona times. But we’re really trying to…how do you call it? Um…there’s a saying. Let me see if I can get it…Um…It’s like…something in disguise? Blessing in disguise.”

Yeah, it doesn’t feel like a blessing in disguise, it just feels like a tragedy which will upend our lives for months and years, not only with the actual virus and deaths, but with the recession and unemployment and political chaos. I realize Gal was speaking as an optimist and speaking of her own personal silver lining (more time with her family), but a tad tone-deaf. But again, English is her second language and she struggles with English idioms (the cake thing was adorable). I also like the word “elbowy” to talk about ambition. Maybe she can create some English idioms of her own!

60 Responses to “Gal Gadot: The pandemic is ‘horrible, frightening’ & a ‘blessing in disguise’”