Carson Daly and his kids cut his hair live on the Today Show: not bad? 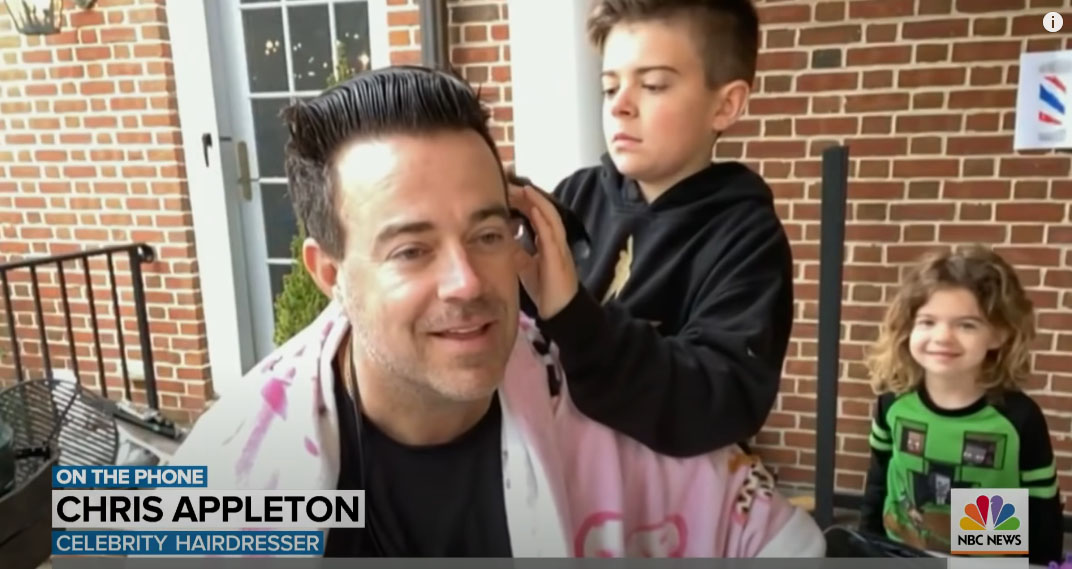 I find it funny that so many people I know are talking about giving themselves haircuts. A week or so ago (I’ve lost all track of time) one friend asked whether she should let her husband cut her hair, and then suddenly it seemed like every few posts in my Facebook feed, someone else was talking about an at-home haircut. Hecate mentioned that she and her husband have discussed giving each other haircuts. Celebrities are doing this, too. Pink cut her hair, and Chris Evans helped his brother Scott shave his head.

Carson Daly is the latest celeb to give himself a haircut. He did this Wednesday on live TV while his Today co-hosts watched with a mixture of amusement and fear. (Hoda’s reactions were the best.) Carson wasn’t alone, though. Celebrity hairstylist Chris Appleton, who styled Jennifer Lopez’s hair before the Super Bowl and who has worked with other celebs including Kim Kardashian, was on the phone explaining to Carson how to cut his hair properly. Carson’s 5-year-old daughter London kept him company, and his 11-year-old son, Jack, cut the back and did a pretty good job. (Carson has two other daughters: Etta, who is 7, and Goldie, who is two weeks old.)

Watching Carson Daly cutting his own hair on @TODAYshow made my morning! Snapped this great photo of everyone’s expression! Whose expression is your favorite? pic.twitter.com/rHIoCqAD5d

@TODAYshow I’m not sure what’s funnier….. Carson Daly giving himself a haircut or the commentary/laughs from @hodakotb @craigmelvin @alroker + @SavannahGuthrie Still doubled over in laughter. Funniest thing I’ve seen during pandemic!!! 🤣 😂 Thank U

Carson Daly cutting his hair with help from his son on live TV made my entire day.

I'm a hairdresser screaming for Carson to sit the heck still for 10 seconds.

Carson had some fun with his followers on Instagram: Jack was still cutting Carson’s hair as the segment ended. (Chris Appleton had just told Carson that combing his bangs forward and cutting them straight across with scissors is a “really bad” idea, after Carson asked. Jack said that that is how Carson cuts his [Jack's] hair, and Caron admitted it.)

A bit later, Carson posted a picture of his “completely bald” head:

Here’s the final product! I think we did pretty good! 😂Thanks to @chrisappleton1 for walking my son & I thru the self haircutting process this am live on @todayshow 😳

Carson said that his wife, Siri, told him, “Oh, that’s terrible, no one’s gonna believe that.” A bunch of people did. On Thursday, he said it was a prank (masterminded by Jack), posting two side-by-side photos:

Real vs Fake. I jokingly posted the bald pic & got SO MUCH positive reaction, I actually feel bad😂 I never thought anyone would think it’s real. Turns out, literally, everyone did! It was fun to laugh for most of the day…nice break from reality. Thanks everyone! @todayshow

I think his hair looks good! Jack did a great job. At one point, he told Carson to stop moving. I was with him and the hairdresser: I was worried Jack was going to nick Carson because Carson was moving his head so much. According to that Today article that I linked above, Chris Appleton also approves, telling Carson: “You look great. You did an amazing job.” Carson also said that he’d consider actually shaving his entire head, because he’d gotten a lot of supportive comments from people who didn’t realize that the first picture was fake, and he has a lot of friends who are bald, too. I’m actually thinking of cutting my hair this weekend, and it’s entirely because everybody’s been talking about cutting their own. I figure at worst, I’m going to be inside for another month or so, so it will have time to grow back out.

4 Responses to “Carson Daly and his kids cut his hair live on the Today Show: not bad?”