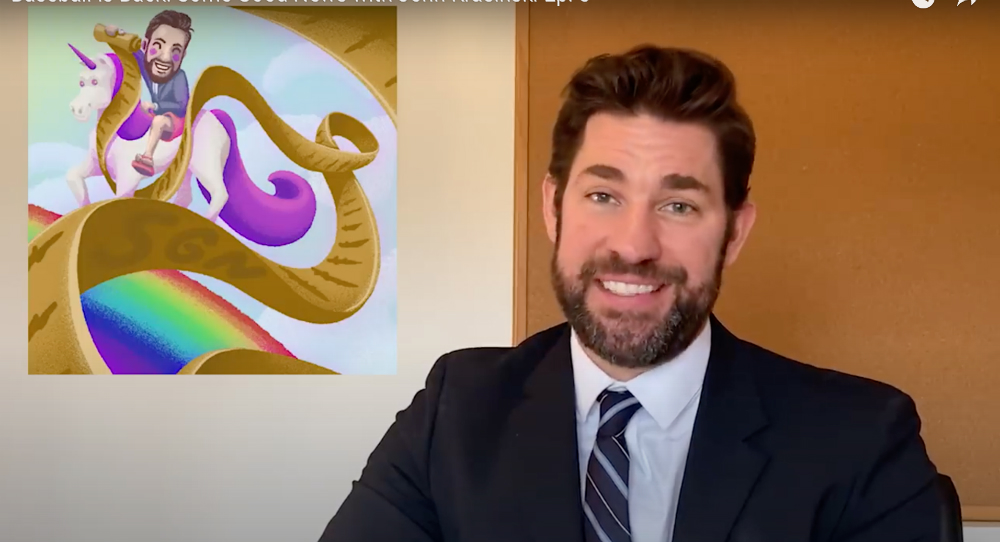 Episode three of John Krasinski’s Some Good News came out on Easter Sunday and once again, it did not disappoint. Early in the week, John suggested he would make this week’s episode sports themed:

And now turning to sports! I…. don't have much to report… So let's have it! Send me @somegoodnews in the wide world of HOME sports!

The episode opened with a new title sequence, provided by the ridiculously talented Squad Harmonix, who performed an a capella version of what I assume was an original song they scored: 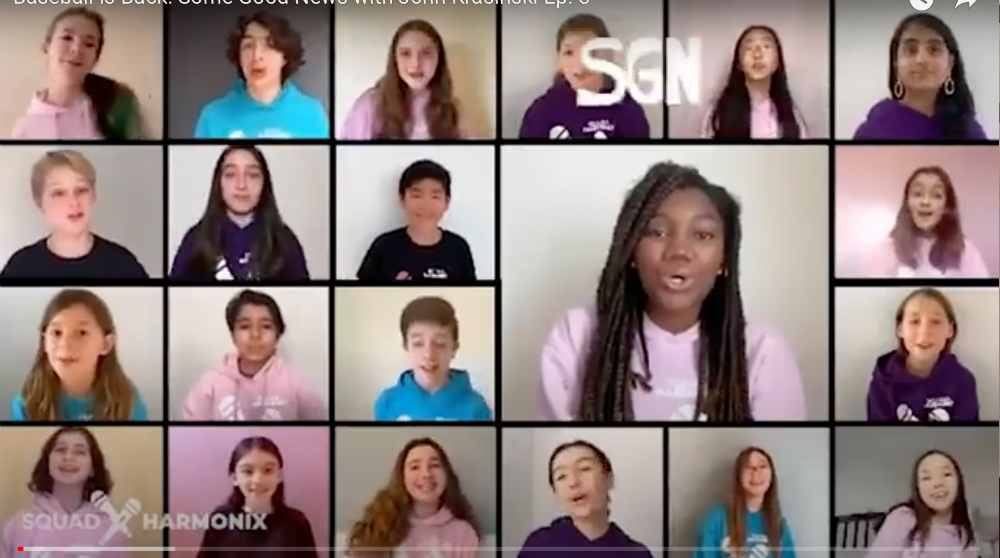 John followed that with fan art he’s received. Because this is SGN and not the seedy underbelly of the dark web, the fan art he showed was both talented and tasteful. From there, John launched into my favorite part of the whole episode. He began his Good News with stories of people who have overcome the virus (2:22 mark) and how the hospitals and health care workers celebrated their journey out of quarantine. In addition to the hero’s sendoff they got, John highlighted clips of hospitals workers literally dancing for joy that they were able to save someone from this deadly disease: 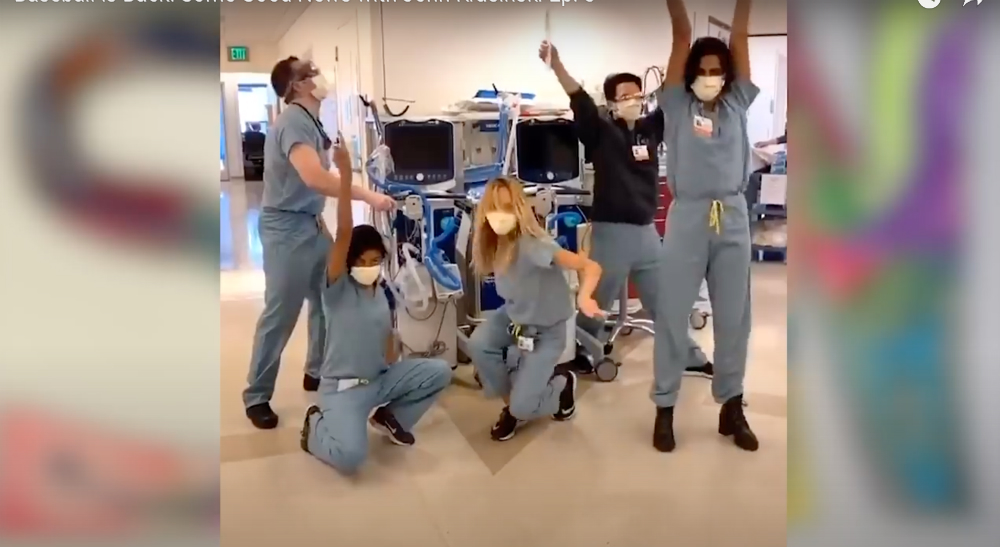 The ICU team @MSHospital has been working night and day for the health and safety of each other and our many ventilated COVID patients so when we extubate one…… we dance pic.twitter.com/bqRw4C8iJD

Next, John ran a few examples of people who have survived the virus and walked out, from a 104-year-old war veteran, to a 36-year old from Escondido who donated his plasma to help others:

The following segment was one of John’s regulars, an assortment of fun clips on how folks around the globe are coping with isolation in fun and positive ways. Five and a half minutes in, John turned to sports, which, remember, was going to be the focus of this week’s episode. His started with folks at home and their various ‘sporting events’, including this clip that made the rounds last week:

Some sports are slower. More about the strategy. pic.twitter.com/JMBaGJ1tSd

Taking a cue from Andrew Cotter (check out some of his other videos), John enlisted the help of sportscaster Joe Buck to commentate on a few of John’s videos. They’re all cute but I could watch the women launching things into her washing machine, with her partner running interference on loop all day. At 9:11 into the video, John finally introduces the fact that opening day for baseball was supposed to be last week. He showed a collection of at-home baseball games and homages to the sport. Those led into hospital workers in various states who were also missing the National Pastime. At 10:21, John introduced his special guests, some of Beth Israel Deaconess Medical Center’s COVID unit who had sent in this tweet:

Even though we miss @redsox baseball and the excitement down the street at Fenway, @bidmchealth’s Red Sox Nation is still going strong! #somegoodnews @johnkrasinski @somegoodnews pic.twitter.com/SmCINxzxeY

After telling the group how honored he was to speak with them, John brought in his ‘special guest: David Ortiz, who announced that the staff of Beth Israel would receive Red Sox tickets – for life. The staff was very excited to speak with him and we, at home, smiled and waited for the rest of the team to call in via Zoom. But that was last week. Instead, John had the COVID staff pile (at a proper social distance, of course) into a very sterilized Duck Boat and carted them off to Fenway Park, where they officially threw in the first pitch of the 2020 Baseball Season. But, not before the Mayor of Boston, the Governor of Massachusetts and the rest of the Boston Red Sox applauded them from the jumbotron:

If you continue past the Fenway segment, John reached out to the rest of the doctors and nurses across the country and announced that AT&T was paying their cell phone bills for three months:

Thank you @JohnKrasinski for letting us share @SomeGoodNews tonight with you! Nurses & physicians deserve the world 🌎❤️ Learn how we’re offering them 3 months of free wireless service on the @FirstNet network at https://t.co/TPNIGhKRaB https://t.co/3Hdni45cra

I don’t know how your Easter turned out, but mine ended with a phone call from my scared mother who’d just watched my unconscious father get loaded into an ambulance, unable to go with him as she’d not be allowed in the hospital. It was a rough night, to put it mildly. And as I tossed and turned in bed for the third hour, I gave in, picked up my phone and logged in to Twitter. I kid you not SGN’s tweet was at the top of my feed, begging me to take 18 minutes to feel good. I snuck out of bed and watched it, twice, in my living room with my dogs on my lap and allowed myself to cry. I think John set out to do something fun and silly, hopefully giving folks a few feel good moments. I don’t know if he understands how much he is actually doing in that quarter hour each week. BTW, if you need a little pick me up, the SGN Twitter page is generally a source of a smile or two.

And as of this writing, my father is awake and speaking. We are awaiting test results but it looks like we are through the worst of it, so – Some (more) Good News.

Very cool to be included in this. Thank you @Apple pic.twitter.com/oodzdgMCZ2