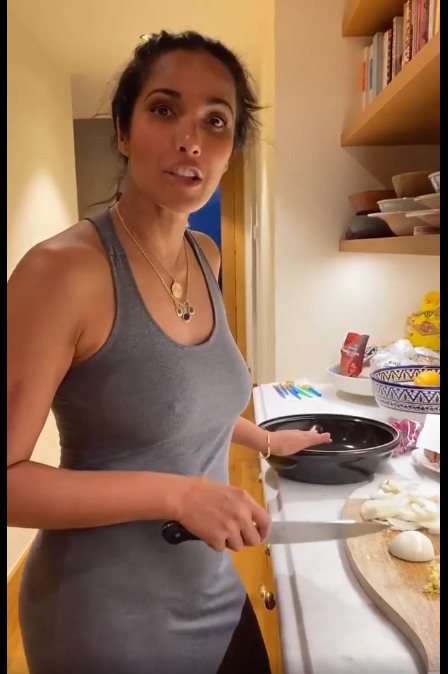 Over Easter weekend, Padma Lakshmi posted a video where she was making a glorious looking chicken tagine (a classic Moroccan dish). I enjoy all of these cooking-show experts showing off their home-cooking skills in quarantine, and you can definitely see who is enjoying the challenge and who is not. Padma seemed a bit frazzled as she made the tagine and as you can see the screencap and video, she was just wearing a lowkey stretchy cotton dress. And no bra.

Which brings up an issue that’s been going around for weeks: are we, as women, just going braless in lockdown? Many women say yes, that they haven’t worn bras in weeks and their girls are going free. Some people – like yours truly – have been going braless more often, but are still generally trying to keep some semblance of bra-wearing normalcy. It helps that I’ve worked from home for years and I find that “putting on a bra” signals, to me, that I’m in “work mode.” Am I the only one keeping up that small marker of professional responsibility? Or is everyone simply letting it all hang out?

That being said, if my girls looked as perky as Padma’s, I would be going braless every single day, no matter what. And obviously, Padma is cooking IN HER OWN HOME. She was just bumming around her own kitchen, trying to teach people how to cook tagine. But that didn’t stop people from making nasty comments on her Instagram about her perky “immoral” breasts. So Padma made another cooking video and this time she wore TWO bras (one of them a sports bra) and she wrote this:

(I got some comments last time that it was immoral for me to not wear a bra in my own kitchen during the quarantine. So those people should be happy to note that I’m wearing two today 😂) But seriously, let’s not police women’s bodies in 2020 ok?

Well, she dealt with that as well as can be expected. Honestly, her boobs are slightly distracting in the tagine video… but of course she has every right to wear (or not wear) whatever she wants, whenever she wants. It’s not a question of morality, for the love of God. Also: I think her boobs hypnotized me into wanting to make chicken tagine.