Chris Hemsworth ‘felt a lack of creativity’ playing Thor: ‘Is this all I can do?’ 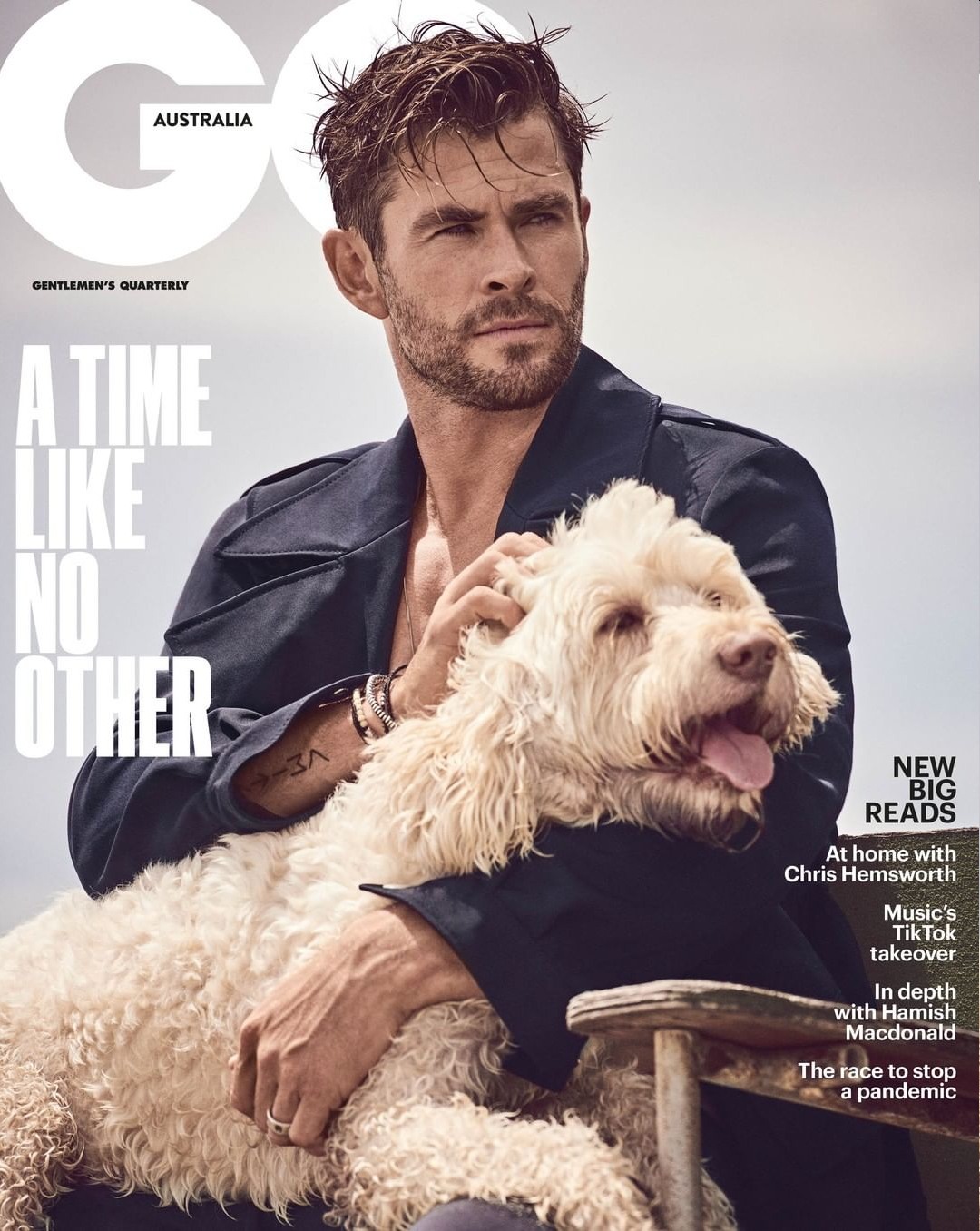 Chris Hemsworth is the cover subject for the latest issue of GQ Australia. While I’ve always been more into Liam, Chris is doing it for me on this cover. It’s the combination of the shorter hair, the not-too-skinny-not-too-beefy physique, the beard stubble and the cute doggo. It’s nice! I would hit it. Chris covers GQ to promote NatGeo’s Limitless and Extraction, but he’s got Thor: Love and Thunder coming out next year too, so he chats about that as well. This interview took place during the lockdown, and GQ pours it on thick about how Chris is unlike all of those other celebrities whining about quarantines in giant yachts and such. Chris is a real Aussie bloke who doesn’t complain! Or something. You can read the full piece here. Some highlights:

Being in a lockdown: “It’s probably the first time in about 10 years that I don’t know what I’m doing for the next six months. I don’t have it all mapped out. To some degree, it’s nice not to have a schedule, but the unknown and the uncertainty is intimidating.”

He won’t complain: “We’re very fortunate. But we’re here at home and attempting to homeschool the kids, which is a feat in itself. They’re better students than I am a teacher, to be honest.”

Working in the industry: “You need to have an obsessive approach, just like anything where the odds are stacked against you and it’s a one-in-a-million chance that you’re going to get your foot in the door. But once you are on that train, not a day goes by where you don’t think it’s going to be taken away, all of a sudden. You still have this fear and anxiety programmed in you that it’s all going to slip away. But I must admit that once I had paid off my parents’ house and taken care of my family, I had a moment where I thought: what now? What’s driving this?

Getting burned out: “Every job I’d take, every time I’d go off on these extended trips, it got harder and harder. For a little while you don’t think the kids notice and then you realise they do. I absolutely want to continue to make films that I’m proud of, but that can also wait. Now what’s more important is my kids are at an age I don’t want to miss. And I’d hate to look back in 20 years and go, ‘Right, let’s get to work as a parent’ and I’ve missed it all.”

Moving back to Australia in 2014: “You’re a little bit too much in the eye of the storm when you’re living in Hollywood. Living in Australia, it’s also easier to detach myself from work – and you get a bit more leeway to let a few emails and phone calls slide on by.”

He hated the middle-years of Thor: “I felt a lack of creativity. But that was less about whether I was typecast – it was, ‘Is this all I can do?’”

On Taika Waititi: “He’s insanely fun. But don’t mistake that child-like, frantic energy for someone who isn’t prepared. That’s quite a unique combination, that he has the ability to, through humour, put you at ease, but is also armed with all the knowledge that a director needs to lead you through the process. And it came at a time when I desperately wanted there to be more humour to the character.”

On Waititi’s Oscar win: “I was certainly happy for him when he won and it was a pretty special moment. I hadn’t actually seen any of the other films he was nominated against – I hadn’t seen much of anything. Living here I was like, ‘Oh yeah, it’s Oscars season’. I’d been pretty out of the loop.”

He annoyed me in this interview, honestly! TEAM LIAM. I think I’m just annoyed by his general moodiness about playing Thor. I mean… I’m sure the die-hard Hemsworth stans will point to various non-Thor roles, but the man is Thor and that’s what he’s known for, and he’s never given me any reason to find him believable in another role. So why was he so angsty? Why did he disappear when it came time to promote Thor: The Dark World? I find that part of it massively unprofessional. Also: I will always and forever believe that the main reason he moved his family to Australia was because he wanted to get Elsa away from the daily pap strolls and general LOOK AT ME-ing.

58 Responses to “Chris Hemsworth ‘felt a lack of creativity’ playing Thor: ‘Is this all I can do?’”