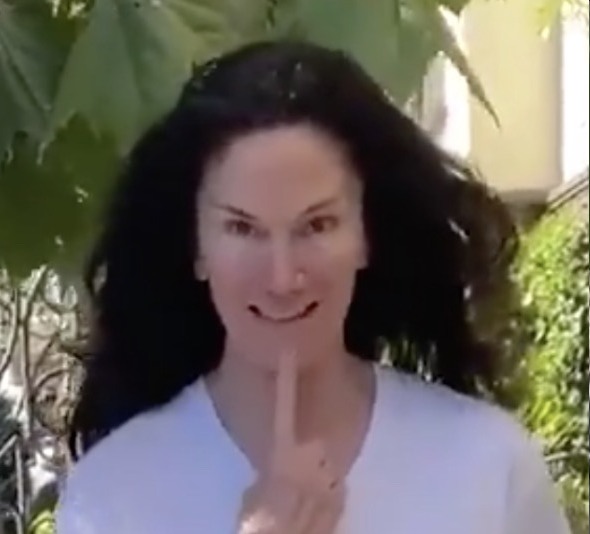 For much of Saturday, “Karens Gone Wild” was trending on Twitter because the Karens Are Not Alright. I do not understand why so many white ladies have not used this moment of global race/racism discussion to quietly reflect and decide what side of history they want to come down on. If anything, it seems like the Karens have been emboldened to be THE WORST though. And yes, I know there were other terrible things happening this weekend, but also: we need to study some of the Karen microcosms, the everyday Karens and how entitled and racist they are. Let’s start with Lisa Alexander, the founder of LA FACE, a vegan skincare brand which used to be carried by Birchbox. This incident happened in the San Francisco area, where Lisa Alexander and her husband stopped to police a person of color who was writing “Black Lives Matter” in CHALK on his own front stoop.

A white couple call the police on me, a person of color, for stencilling a #BLM chalk message on my own front retaining wall. “Karen” lies and says she knows that I don’t live in my own house, because she knows the person who lives here. #blacklivesmatter pic.twitter.com/rOpHvKVwgP

I’ve watched this a few times, and I get angrier and angrier every time. The fact that she feels entitled to behave as a roaming police officer “questioning” the actions and motives of a man of color who is merely existing. And, again, it was JUST CHALK. Even if it wasn’t his property, it was just chalk. But it was his property, and Lisa Alexander lied about knowing the owner. As it turns out, she doesn’t even live in that neighborhood. She tried to post a statement on her social media: “I asked if he lived there because if he had said yes then everything would have been fine as it was his property. Being a good neighbor is important where everyone takes care of each other. It is too bad he took it in a different direction.” That was quickly deleted along with her Twitter and Instagram. Birchbox had to respond too:

The second big moment for Karens Gone Wild was Covid Karen, a healthcare worker named Lauren Balsamo was so mad that someone told her to wear a mask in a coffeeshop that she ran over to cough on them:

Called out for not wearing a mask…

So she coughs on somebody, not realizing she is being recorded.

Once again, people researched her and found her, and they began asking questions to what they thought was her employer, Weill Cornell Medicine. WCM had to issue a statement too.

Lauren Balsamo has not been an employee of WCM since Jan. 2020. As an institution on the COVID-19 frontlines, this behavior is shocking & abhorrent to us. Since WCM's mission is to protect the health & wellbeing of all NYers, we condemn this flagrant disregard of public safety.

These were honestly just two videos from an avalanche of Karens Gone Wild over the past few days. Karens are not the police. They do not get to call the police on black people for merely *existing*. They have to follow the laws too. Jesus Christ.

173 Responses to “Karens Gone Wild: White women continue to ‘police’ people of color for no reason”