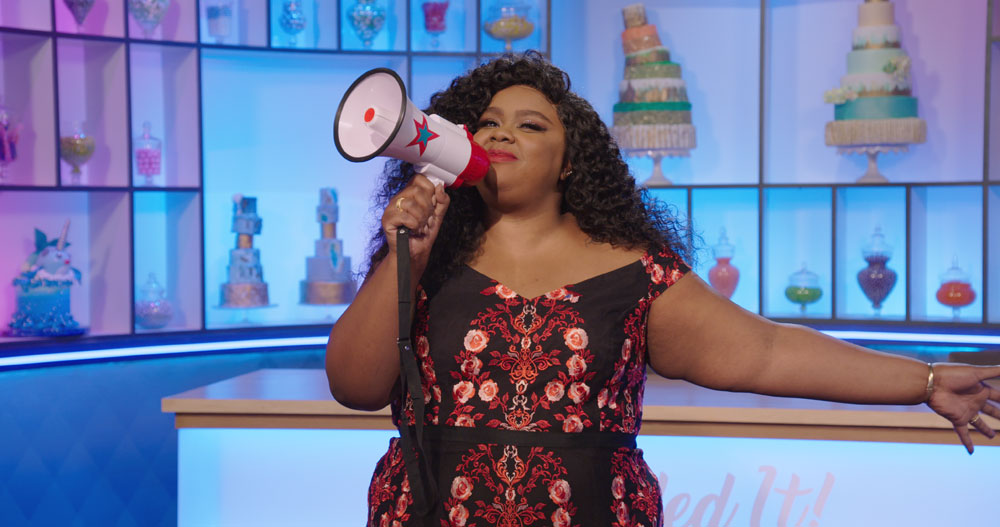 I know Nicole Byer from her standup specials and the show Nailed It on Netflix, where truly terrible bakers compete to make the least disgusting desserts. It’s one of those shows that’s good to have on when you’re doing something else around the house because it’s entertaining when you pay attention and you don’t miss much when you don’t. (Sidenote: Nexflix should add this category.) The show is good-natured, Nicole is so funny and I like how she plays off the co-host, Jacques Torres. She was on Conan O’Brien’s show to promote her new coffee table book, #VeryFat #VeryBrave, The Fat Girl’s Guide to Being #Brave and Not a Dejected, Melancholy, Down-in-the-Dumps Weeping Fat Girl in a Bikini. It has pictures of her modeling bikinis in cool settings and she told Conan O’Brien it’s a quick and inspiring read. I also really liked what she had to say about the whole narrative around bigger women wearing bikinis. I’m including some quotes she gave Kelly Clarkson on her show too.

On the protest movement and if things will go back to ‘normal’
It makes me feel hopeful because the protests haven’t stopped since May. It’s just really depressing to wake up, open Twitter and go ‘oh ok, somebody else is dead’. I don’t know if things will go back to normal, at least not for Black people. We talk about it ad nauseam. If you’re not radicalized, you’re part of the problem. I encourage white people to read White Fragility. It’s a wonderful book that breaks down why white people don’t want to talk about race and why their discomfort seems to take precedent over learning.

How she came up with the idea of her her book
My friend Kim Newmoney took the pictures and my friend Alison Rich was like ‘you should do a coffee table book.’ As I was writing it I was like ‘it’s so dumb that people call fat women brave for wearing bikinis. Why don’t I just make fun of that whole weird phenomenon?’ I hope people read the book and then go ‘why did I ever give a sh-t about what people think about me?’ If someone stares at me that means my body disrupted their life enough that they needed to stop what they were doing to look at me and that’s powerful. Every body is beautiful in its own way and everybody is different. The world is already really hard, so why would you spend it hating what you see in the mirror?

Somebody who [wore] a bathing suit to go swimming is brave? No they’re just wearing the correct articles of clothing to do an activity. It’s totally insulting. [My book] is very tongue in cheek. I don’t think I’m brave.

What’s that saying, “every body is a bikini body?” I hope this helps reframe the conversation around how people talk about women in bikinis, as Nicole mentioned. Nicole also told Kelly Clarkson that she’s been learning how to rollerskate and that she’s taking pole dancing classes. I’ve tried taking pole classes and they are so hard! I only did the beginner classes and then gave up. She said she likes it because you can really tell when you’re making progress because you can do moves you couldn’t before.

Very Fat, Very Brave is the #1 new release on Amazon in the Internet & Social Media Humor category and you can get the Kindle edition for $9.99. Nicole is doing a live book launch event on Zoom tonight at 7pm EST and you can get tickets here. It’s co-hosted by her best friend, Sasheer Zamata from SNL.

Read the caption to this, it’s for white parents talking to their kids about Black Lives Matter.

Hi hello I’m Nicole. I host a tv show called @nailedit a lot of kids watch the show. In an Instagram comment someone said they would “keep their head down and just let their kids watch nailed it.” (I turned off the comments so ya can’t find it and attack that person also dunno their ethnicity or anything about them) That made me boo hoo hoo. That you will allow your kid to watch me but not stand up for me. So I’ll do the work I’ll write you a conversation to have with your white child A good way to explain to kids #blacklivesmatter : “you like this black lady right? She’s silly? She makes you tee hee hee?You would be sad if a police officer hurt her right? Well this is the current country we live in where someone you like can be hurt by the color of their skin and people in charge aren’t doing a fucking (you can replace that with dang if ya kids are soft) thing about it. So they are protesting, and the looters… well some of it is staged as a distraction some are opportunistic and some are people who’ve been oppressed for so long it bursts. And nice cops? There are no nice cops because if a cop was nice they wouldn’t watch and participate in violence against black and brown people. If cops were really nice they would have spoken out about police brutality years ago and maybe walked out on their precincts to send a message that they are against this. Instead they dress up like your GI Joe doll and are very mean. The curfews the helicopters the police in riot gear is all because black people have asked to not be killed… that’s it. There’s literally nothing else to it. Now once a week let’s read about shit (stuff for the soft kids) that happens to black people that doesn’t get covered in schools like Juneteenth, black Wall Street, how black people have influenced most of pop culture today and aren’t credited or it’s just co-oped… and if you do this post about. Post about the black history you teach your white kid to maybe inspire another white parent to do the same thing. There I did it you can read it verbatim to your kids. Also I’m open to any additions. Raise kids who give a fuck and you gotta give a fuck #blacklivesmatter

This is the flattest I’ve ever gotten my split. Cc: @veronicanichols 💜💜💜 Black lives matter so they can do splits on da dick This week: A Black man was shot in the back 2 Black men were found hanging in public places 2 Black trans women were murdered Breonna Taylor’s murderers are still not in jail Also if you still think BLM isn’t important PLEASE unfollow me. I don’t need delusion by proxy Next week could be me or any one of your Black friends. #blacklivesmatter #blacklivesfuckingmatter

One day I will be good at this. Also, millions of protesters across the country are speaking out against anti-black racism and police violence. But we still have a lot of work to do, and we can't let up. So keep going. Continue fighting for our Phenomenally Black community until there's full accountability. All proceeds from this @phenomenal tee benefit @blackfutureslab, which is working to build Black political power ✊🏾✊🏿✊🏽🤙🏾🤙🏾🤙🏾🥳 also there are many different shirts to choose from!