The Pentagon’s UFO-investigation unit is still around & it’s not classified??

In April of this year, coronavirus wasn’t the only thing in the air. No, we all caught a whiff of a massive government conspiracy to hide the existence of aliens and UFOs!! That was when the Pentagon publicly released three videos of Navy pilots encountering UFOs (literally unexplained flying objects) mid-flight, and all of the pilots were freaking out to varying degrees about what they were seeing. If you are like me and you’re an Ancient Aliens fan or an X-Files fan, this is not surprising. There have been “modern” UFO sightings for decades, and if you believe Ancient Aliens (a big IF), there have been stories of flying objects, alien races, alien technology and alien abductions for millenia. It’s also not a secret to the amateur Ufologists among us that the American government has devoted resources for the better part of a century to investigate, document and study UFOs, possibly alien technology and more. Now the Pentagon will be releasing some of the documents/documentation:

Despite Pentagon statements that it disbanded a once-covert program to investigate unidentified flying objects, the effort remains underway — renamed and tucked inside the Office of Naval Intelligence, where officials continue to study mystifying encounters between military pilots and unidentified aerial vehicles. Pentagon officials will not discuss the program, which is not classified but deals with classified matters. Yet it appeared last month in a Senate committee report outlining spending on the nation’s intelligence agencies for the coming year. The report said the program, the Unidentified Aerial Phenomenon Task Force, was “to standardize collection and reporting” on sightings of unexplained aerial vehicles, and was to report at least some of its findings to the public within 180 days after passage of the intelligence authorization act.

While retired officials involved with the effort — including Harry Reid, the former Senate majority leader — hope the program will seek evidence of vehicles from other worlds, its main focus is on discovering whether another nation, especially any potential adversary, is using breakout aviation technology that could threaten the United States.

Senator Marco Rubio, the Florida Republican who is the acting chairman of the Senate Select Committee on Intelligence, told a CBS affiliate in Miami this month that he was primarily concerned about reports of unidentified aircraft over American military bases — and that it was in the government’s interest to find out who was responsible. He expressed concerns that China or Russia or some other adversary had made “some technological leap” that “allows them to conduct this sort of activity.”

In 2017, The New York Times disclosed the existence of a predecessor unit, called the Advanced Aerospace Threat Identification Program. Defense Department officials said at the time that the unit and its $22 million in funding had lapsed after 2012. People working with the program, however, said it was still in operation in 2017 and beyond, statements later confirmed by the Defense Department.

I am neither a Scully nor a Mulder about this – I think it’s more than possible that an advanced alien life form has visited us and left us some of its technology. I also think it’s more than possible that we’re being spied on and infiltrated by other countries and that some of these “flying objects” are foreign spy planes, spy satellites, drones, etc. It’s also possible that everything is connected – one of the stories I believe from all of those alien shows is the story about how America is not the only country to have some kind of program devoted to UFOs/aliens, and that “alien technology” is becoming the new frontier in international intrigue, the new “space race” or “cold war.”

The Times also reports that the former director of the Pentagon’s UFO program, Luis Elizondo, says that he believes that “objects of undetermined origin have crashed on earth with materials retrieved for study” and that the Pentagon regularly conducts classified briefings for various high-ranking Congresspeople AND “aerospace company executives.” Because if you’re trying to reverse engineer alien technology, it’s not just a matter of using DARPA or whatever. Boeing, Lockheed, Raytheon, they all want to find a way to monetize alien technology, if it does exist. The Times also spoke to various aerospace sub-contractors, some of whom have seen pieces here or there which have led them to believe that there really are some “unexplained” phenomena and unexplained technologies which are still in the process of being reverse-engineered. THE TRUTH IS OUT THERE. 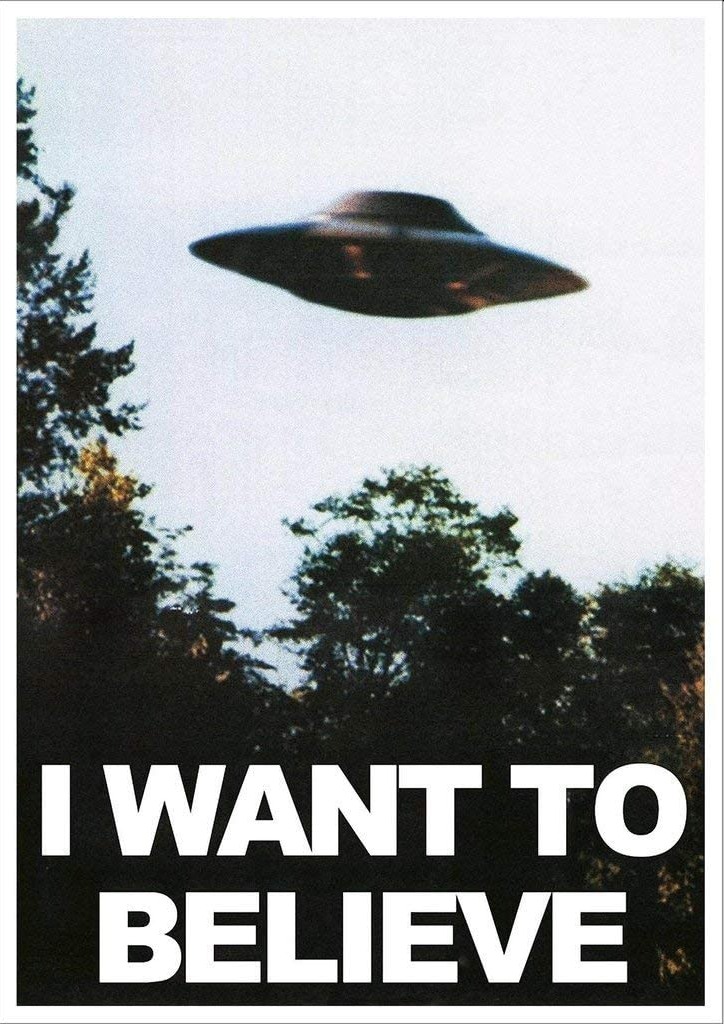 Photos courtesy of Getty, ‘I Want to Believe’ poster.

22 Responses to “The Pentagon’s UFO-investigation unit is still around & it’s not classified??”