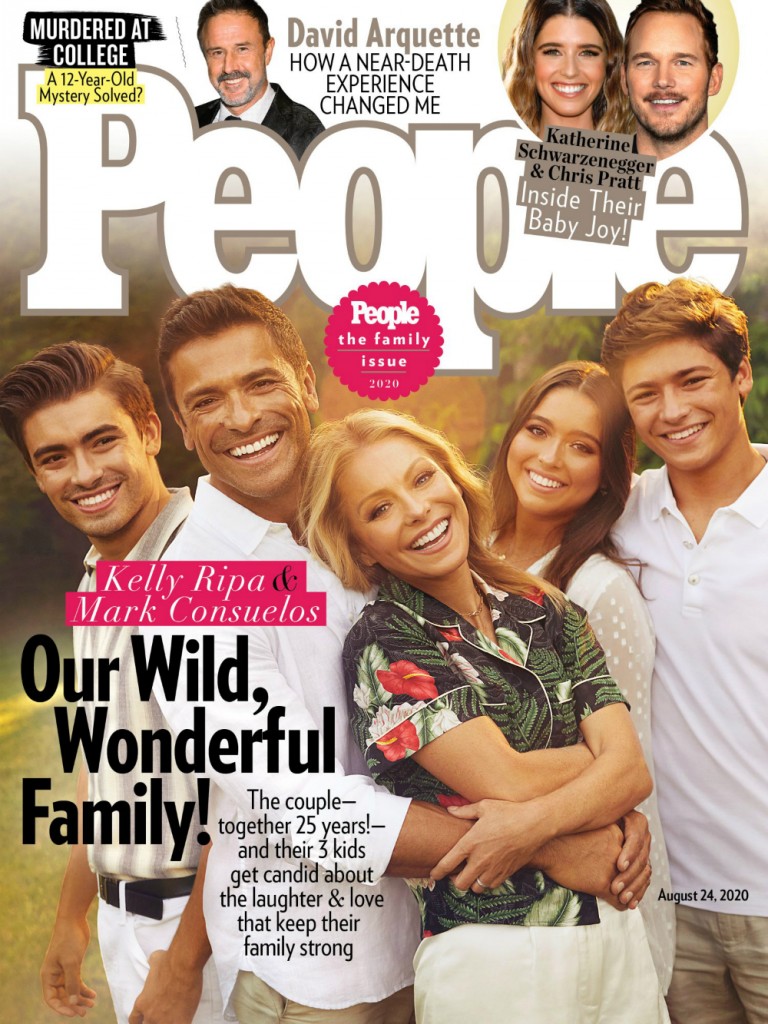 Kelly Ripa and Mark Consuelo appear on the cover of this week’s People along with their three kids, Michael, 23, Lola, 19 and Joaquin, 17. People is calling this their “inaugural family issue,” which explains why the whole crew is on there. Kelly and Mark celebrated their 24th wedding anniversary in May. With a scandal-free marriage and three kids who still hang out with them, I’m fine with them being the first People family ambassadors. They got the whole People package too, with a big photoshoot and videos of them interviewing each other. You can read the first release here, focusing on how Kelly and Mark have changed as parents. I found myself agreeing with what they said about parenting and pulling back the more you trust your kids. But I really enjoyed the interview clips between Kelly and Lola. The questions People provided are expectedly softball but the answers were good, particularly when it came to their comments about Kelly’s social media.

Lola: Something my mom posts on social media that I would never is… the comments back to the haters. I don’t even think you should give them the time of day. People are sitting at home wishing they were you.

Kelly: I think my haters and I have a healthy relationship with each other. It’s a give and take. The people that I clap back to are very clever, they’re usually very funny, I usually get a good chuckle out of it. They deserve a little pepper.

Lola: Or the belfie, that was ridiculous, the butt selfie?

Kelly: That was good. Apparently, I should not clap back, but I thought the clap back is what people want. I thought you were going to say I shouldn’t post thirst trap pictures of your dad.

Lola: That’s disgusting I forgot you even did that. I don’t even know if I follow you still

[From video on People.com]

So just to get it out of the way, whereas I can certainly appreciate Lola’s stance on the subject, please, God, Kelly – never stop the Mark thirst trap photos. Those have gotten me through some of my darkest hours… or at least some of my horniest. As for Kelly clapping back, I like Kelly’s views on her “haters.” I like that she kind of respects the ones she responds to. Ultimately, I still agree with Lola, that it’s probably better not to give them that space, but the fact that Kelly thinks they’ve earned a peppered response for being clever with their criticism is a unique way to think about it. Lola went on to tell her mom that, “irrelevant people should stay out of our lives,” and my gawd, I think I am going to have that painted on my front door – what a great line.

I found myself moved by this interview video between Kelly and Lola, which you can see on People’s site. In the past, it appeared as though Kelly kept dragging Lola through the mud for the entertainment of her fans/followers. But their rapport in the video shows a mutual respect and a lot of affection. I may not agree with a lot of what Kelly posts, but ultimately, it’s Lola she has to answer to, and it sounds like they’re on shared ground. I heard a lot of myself and my mother in them and that gave me some good feelings for the day.

Now, let’s see how long it takes for Kelly to offer up some TMI on her kids after this. Maybe she should just focus full-time on those Mark thirst traps.

The nest is getting roomy………💕

This is your thirst trappy reminder to watch an all NUDE #riverdale TONIGHT on @thecwriverdale 8/7 central. Did i say nude? I meant new 🔥💦