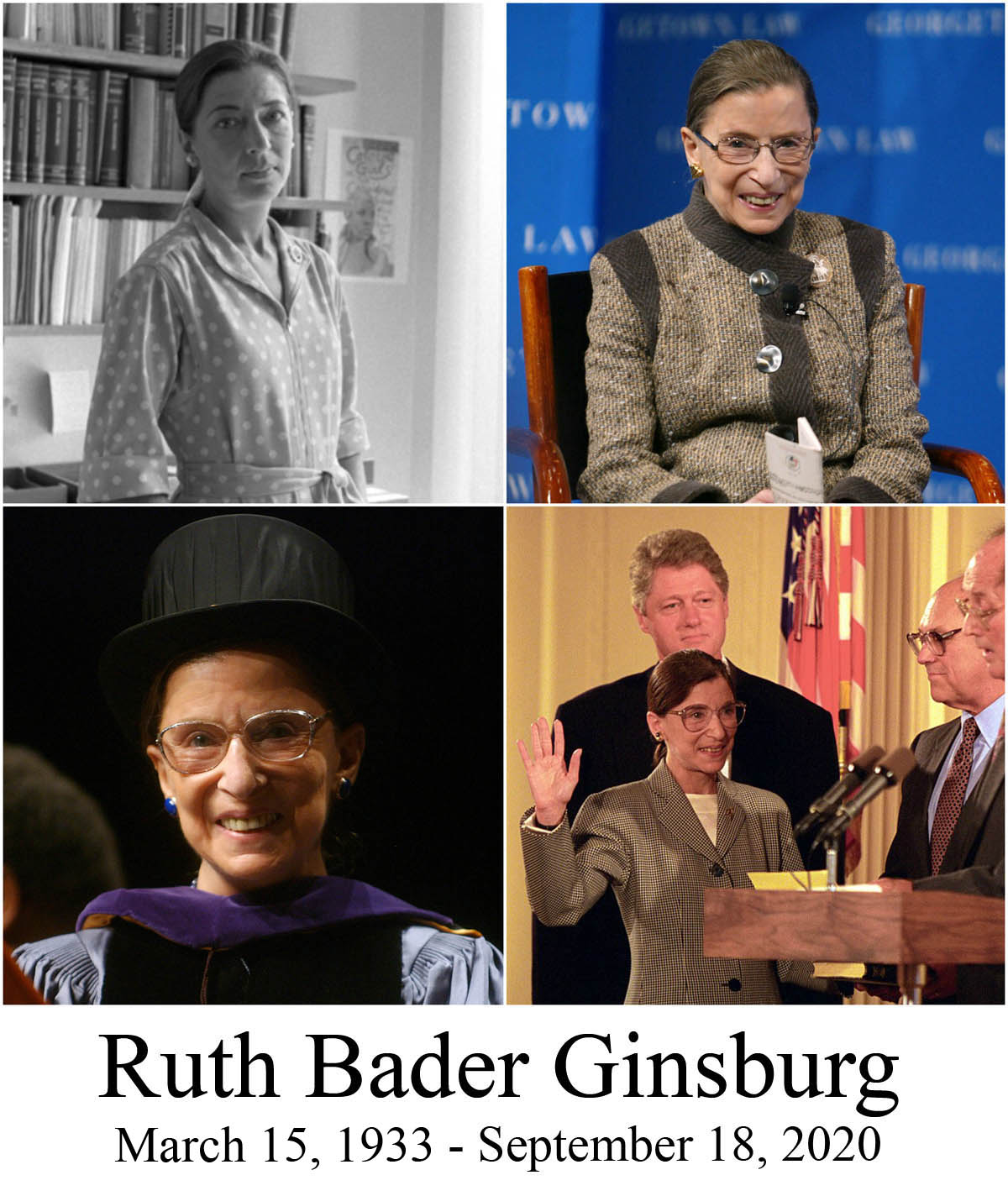 Supreme Court Justice and feminist icon Ruth Bader Ginsburg passed away in her home in Washington yesterday from complications from pancreatic cancer. Her death at 87 leaves a seat vacant just six weeks before the presidential election. Noted hypocrite Mitch McConnell, who blocked President Obama’s nomination of Merrick Garland in March, 2016, has already vowed to push through a nomination because of course he has. (Please donate to fund democrat opponents to incumbent republican senators in the upcoming election.)

Ginsburg, who was appointed in 1993 by President Clinton, leaves an incalculable legacy for women’s rights and human rights. I’m going to quote some of Nina Totenberg’s obituary to Ginsburg as Totenberg was a personal friend of Ginsburg’s. She said on the NPR Politics Podcast that Ginsburg was a mentor and then a dear friend to her, especially as Totenberg’s husband was dying of cancer. Ginsburg’s legacy is of a justice who cared deeply and worked tirelessly for decades. In no way can I do justice to this extraordinary woman or even to Totenberg’s writeup of RBG’s life. I’m just quoting the part about her later work.

Over the years, as Ginsburg’s place on the court grew in seniority, so did her role. In 2006, as the court veered right after the retirement of Justice Sandra Day O’Connor, Ginsburg dissented more often and more assertively, her most passionate dissents coming in women’s rights cases.

Dissenting in Ledbetter v. Goodyear in 2007, she called on Congress to pass legislation that would override a court decision that drastically limited back pay available for victims of employment discrimination. The resulting legislation was the first bill passed in 2009 after Obama took office.

In 2014, she dissented fiercely in Burwell v. Hobby Lobby, a decision that allowed some for-profit companies to refuse, on religious grounds, to comply with a federal mandate to cover birth control in health care plans. Such an exemption, she said, would “deny legions of women who do not hold their employers’ beliefs, access to contraceptive coverage.”

Where, she asked, “is the stopping point?” Suppose it offends an employer’s religious belief “to pay the minimum wage” or “to accord women equal pay?…

Ginsburg always kept a backbreaking schedule of public appearances both at home and abroad, even after five bouts with cancer: colon cancer in 1999, pancreatic cancer 10 years later, lung cancer in 2018, and then pancreatic cancer again in 2019 and liver lesions in 2020. During that time, she endured chemotherapy, radiation, and in the last years of her life, terrible pain from shingles that never went away completely. All who knew her admired her grit. In 2009, three weeks after major cancer surgery, she surprised everyone when she showed up for the State of the Union address.

Shortly after that, she was back on the bench; it was her husband, Marty, who told her she could do it, even when she thought she could not, she told NPR.

A year later her psychological toughness was on full display when her beloved husband of 56 years was mortally ill. As she packed up his things at the hospital before taking him home to die, she found a note he had written to her. “My Dearest Ruth,” it began, “You are the only person I have ever loved,” setting aside children and family. “I have admired and loved you almost since the day we first met at Cornell. … The time has come for me to … take leave of life because the loss of quality simply overwhelms. I hope you will support where I come out, but I understand you may not. I will not love you a jot less.”

Shortly after that, Marty Ginsburg died at home. The next day, his wife, the justice, was on the bench, reading an important opinion she had authored for the court. She was there, she said, because “Marty would have wanted it.”

Years later, she would read the letter aloud in an NPR interview, and at the end, choke down the tears.

In the years after Marty’s death, she would persevere without him, maintaining a jam-packed schedule when she was not on the bench or working on opinions.

Some liberals criticized her for not retiring while Obama was president, but she was at the top of her game, enjoyed her work enormously and feared that Republicans might not confirm a successor. She was an avid consumer of opera, literature and modern art. But in the end, it was her work, she said, that sustained her.

“I do think that I was born under a very bright star,” she said in an NPR interview. “Because if you think about my life, I get out of law school. I have top grades. No law firm in the city of New York will hire me. I end up teaching; it gave me time to devote to the movement for evening out the rights of women and men.”

And it was that legal crusade for women’s rights that ultimately led to her appointment to the U.S. Supreme Court.

To the end of her tenure, she remained a special kind of feminist, both decorous and dogged.

RBG dictated these words to her granddaughter just a few days ago, “My most fervent wish is that I will not be replaced until a new president is installed.” We know how little honor the republicans have and how dirty they play. I hope with all my heart that her wish comes true.

Thank you for all you’ve done for us, RBG. We will remember you and your work will live on in history forever.

Please give money to democrats challenging incumbent republicans in the senate. Work hard to support your local democrats and causes. This is a tough time for our country, for democracy and for women’s rights and human rights. We can honor RBG and her legacy by continuing her fight.

BREAKING: Americans shattered Democrat fundraising site ActBlue’s all-time record for donations in an hour the hour after RBG passed away.

Then, an hour later, they broke that record too.

Proud of us all, turning sorrow into action.

A Jewish teaching says those who die just before the Jewish new year are the ones God has held back until the last moment bc they were needed most & were the most righteous. And so it was that #RBG died as the sun was setting last night marking the beginning of RoshHashanah

Justice Ginsburg’s dying wish was that her seat would not be filled until a new president is installed! Senate Democrats, do not back down. You have a tough fight ahead but our future is on the line! No SCOTUS appointment before the election!!!

This NYT obituary of Ruth Bader Ginsburg by Linda Greenhouse is magnificent.

It includes details of the note her husband Martin wrote as he lay dying from cancer:https://t.co/NvMG7DkQHN pic.twitter.com/xFTNmpyXaQ

Friend in DC shared this photo from the steps of SCOTUS. pic.twitter.com/KRI8nC2NlS