Yahya Abdul-Mateen II: I’ve always been blessed with people who believed in me


Embed from Getty Images
Yahya Abdul-Mateen II is fast becoming a household name with his portrayal of iconic roles. Sunday he won an Emmy for his role as Doctor Manhattan in HBO’s Watchmen. Wearing a Virgil Abloh for Louis Vuitton suit, Yahya accepted his Emmy by shouting out the black women in his life for believing and investing in him. He dedicated his statue to black women as a whole.

Yahya has two more projects slated for release in the coming months. Yahya will star in Netflix’s The Chicago 7, out in October, as famed Black Panther activist Bobby Seale. The Candyman Reboot is finally going to be released in 2021 after it’s original release date was delayed. Yahya did an interview with EW from his Berlin where he is filming another project. He opened up about how he got into acting and how acting and his original passion for architecture is connected. Here are a few excerpts:

Walking that tightrope has served him well in his short yet successful career: He made his screen debut just four years ago, stealing every scene in Baz Luhrmann’s hip-hop drama The Get Down, and on Sunday he won the Emmy for Outstanding Supporting Actor in a Limited Series for his role as the godlike superhero Dr. Manhattan on HBO’s Watchmen, a searing exploration of white supremacy. This fall was primed to mark that aforementioned moment with his turn as the tragic heart of Aaron Sorkin’s awards hopeful The Trial of the Chicago 7 (Netflix, Oct. 16) and his ascension to leading-man status in Nia DaCosta’s buzzy Candyman reboot. Unfortunately, the latter’s release date was pushed back to 2021 due to the COVID-19 pandemic.

Abdul-Mateen uses the word impressionable to describe himself repeatedly. His openness to other people’s ideas is a crucial component of his character. In his sophomore year at UC Berkeley, where he majored in architecture, a track teammate suggested he enroll in acting class after he performed impressions of the coaches at a team-building variety show. So he did, and caught the acting bug. After graduation, he worked for the San Francisco Mayor’s Office of Housing and Community Development by day and took acting classes at night. When he was laid off during the 2008 recession, he decided to survive on his unemployment check and concentrate on honing his craft in the hope that he would eventually move to Los Angeles and book a McDonald’s commercial, which would hopefully lead to him being cast on a soap opera, which is what happened to someone he knew. But ultimately, the combination of seeing his classmates enroll in graduate school and his mentors’ encouragement inspired him to pursue his M.F.A. at Yale School of Drama instead.

Looking back on his journey, he does recognize a connection between his two passions. “It’s all creativity,” he says. “[I’m drawn] to step into something that’s still art, that still allows me to create the world around me.” That said, succeeding in graduate school meant learning how to turn off the plan-loving architectural part of his brain and “open up for more possibility and for more space. To know when to be a thinker and to know when to just let go and let my body take control.”

With their focus on racial injustice, Candyman and Chicago 7 complement this deeply resonant moment — and satisfy the hunger Abdul-Mateen keeps going back to. “Right now, I have an appetite for stories rooted in historical experiences,” he says. “It’s important to be a voice that represents the stories that need to be told right now.” So maybe it’s less about being present for him. Maybe it’s more about prescience.

Yahya has quickly become one of my favorite up and coming actors and I cannot believe he has only been in the game for four years. The man is hella sexy. The roles he chooses are extremely profound for a new comer. He continues to impress with his thoughtfulness. His retelling of Doctor Manhattan’s arc as a god who comes to earth in the body of a black man to give a black woman the love she deserves just made my heart melt.

I hope that Yahya continues to be guided by his love of art and insatiable desire to tell stories that transcends. I will continue to be invested in his storytelling and projects. I hope in the future he decides to go behind the camera as well because I believe that he could create beautiful and compelling stories. Until then, I will continue to drool over him in this black suit because that man is beautiful.

Best seat in the house! It’s a Celebration! #EMMYS 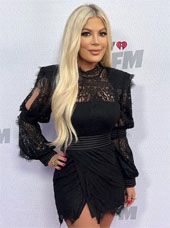 15 Responses to “Yahya Abdul-Mateen II: I’ve always been blessed with people who believed in me”

Prince Louis at the Jubilee parade

Sussexes flew out of UK on Sunday

Harry should 'apologize' to Cambridges?

Kate repeats a look for concert