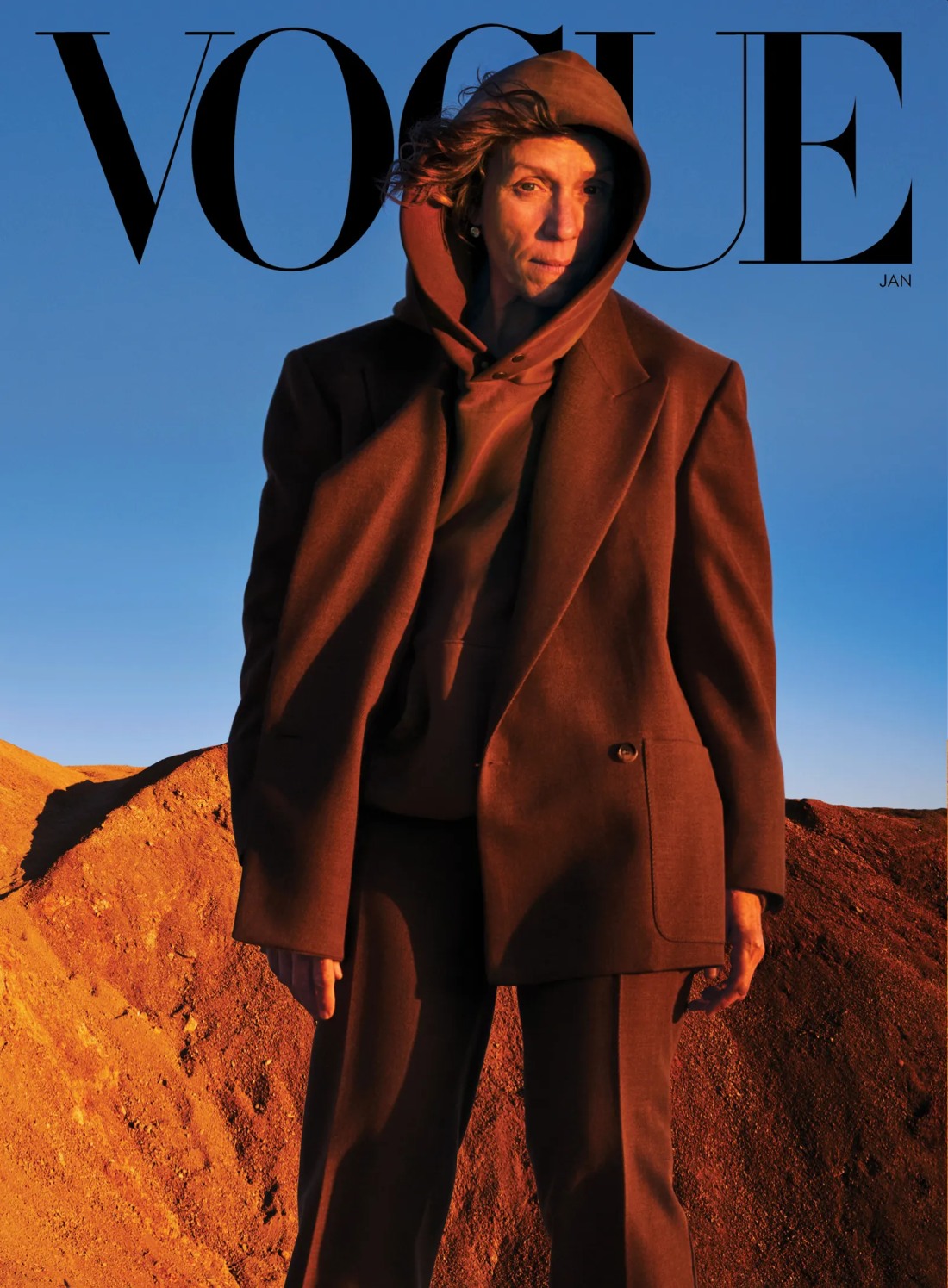 It’s very possible – nay, probable – that whenever the Oscars happen in 2021, a makeup-free and barefoot Frances McDormand will be walking up to the podium to collect her third Best Actress Oscar. As soon as critics began screening Nomadland, the new Chloe Zhao film in which McDormand stars, there wasn’t so much Oscar buzz as a declaration that McDormand is a sure thing. Which is why Vogue Magazine has put Frances, in all of her 63-year-old glory, on the cover of Vogue. Much of the piece is just a summary of Frances’ personal and professional history, some of which I didn’t know – like, I didn’t know she was adopted by a preacher and a preacher’s wife when she wasn’t even two years old. You can read the full piece here. Some highlights:

She spent most of her life playing supporting roles: “[Playing] Females who exist to make sure that you understand that the protagonist is male.”

Her relationship with Joel Coen began when he gave her a book list: “He seduced me with the choice of books. I seduced him by inviting him over to discuss them.” Back in New York, they moved in together. “I realized I could have a relationship that was really deep and passionate but that didn’t keep us from also being able to have a functioning working relationship. I went, Oh, it’s possible to not become so obsessed that you can’t live your life.”

She couldn’t believe that her husband cast Marcia Gay Harden in Miller’s Crossing, she wanted to play it: “That was part of my learning process and part of our learning process privately as a couple. We both had to work through that. You’re not going to get a role every time.”

There was no path for film success: “I wasn’t pretty, I wasn’t cute, I wasn’t beautiful, I didn’t have the body.” Coen helped her depersonalize the rejection: In the medium of film, physical type can trump talent. Over time she hit on a certain niche—the friend of the pretty girl, the girlfriend of substance to the much older man. “It wasn’t just that I decided. It was clear. That’s the only thing I was going to get jobs doing.”

Her son Pedro, who she & Joel adopted just after ‘Fargo’ wrapped: They raised Pedro in New York. Coen shot movies during the summer. McDormand took one film role a year and did a lot of theater. Though they’d rejected organized religion, McDormand wanted to give Pedro some form of mythology. He was going to need stories. “Part of the adoption pathology,” she explained. So she decided they would celebrate pagan holidays. “I couldn’t commit to Christianity. But nature: I could always commit to that, and the power of it.”

Pedro was athletic: “I don’t know how to play sports. His dad’s not really sportive. Pedro’s athletic, but we kind of handicapped him because neither of us wanted to take him to games and stuff on the weekends.” Pedro did inherit McDormand’s love of fashion, though. She would take him to Century 21 on his birthday. “It’s kind of like a sport for us. Shopping is what he and I do together.”

Her character in Nomadland: “With Fern, it’s kind of like Shane, or John Wayne’s character in The Searchers. These men that don’t seem to have a past, only a present, and no future. They just arrive fully formed and they disappear. Except with Fern, because she’s female, she’s got a lot of stuff with her. She’s got a whole van full of memories. Women don’t necessarily come out of nowhere.”

When people love her movie: “To still be culturally relevant as a 63-year-old female is so deeply, deeply gratifying. It’s something that I could have never expected, given what I was told. And I believe I had something to do with it. I’ve crafted some part of this moment in time. And I’m really f–king proud.”

The whole interview is such a trip, but it’s a great read. It’s nice to get a chance to cover a big Vogue interview with someone of substance, someone who has lived a somewhat improbable life and has the baggage to show for it. I’ve never heard her talk about Pedro that much and it sounds like they’re very close – he’s 26 years old, works in PR in New York, and he still loves fashion, like Frances, apparently. She also makes some great references to how being a housewife is a full-time job, and how being married to a preacher is a full-time job too. I love the story about Frances being mad about Miller’s Crossing too!

As an actor, Frances McDormand is as chameleonic as she is unfailingly herself. In our full January cover story, McDormand shares her process, including how she is bringing marginal characters to the center: https://t.co/0dJCOaIbU8 pic.twitter.com/k7I5OAPpBJ

43 Responses to “Frances McDormand: ‘I wasn’t pretty, I wasn’t cute, I wasn’t beautiful’”