Sarah Paulson: ‘I have more in common with Linda Tripp than I care to admit’ 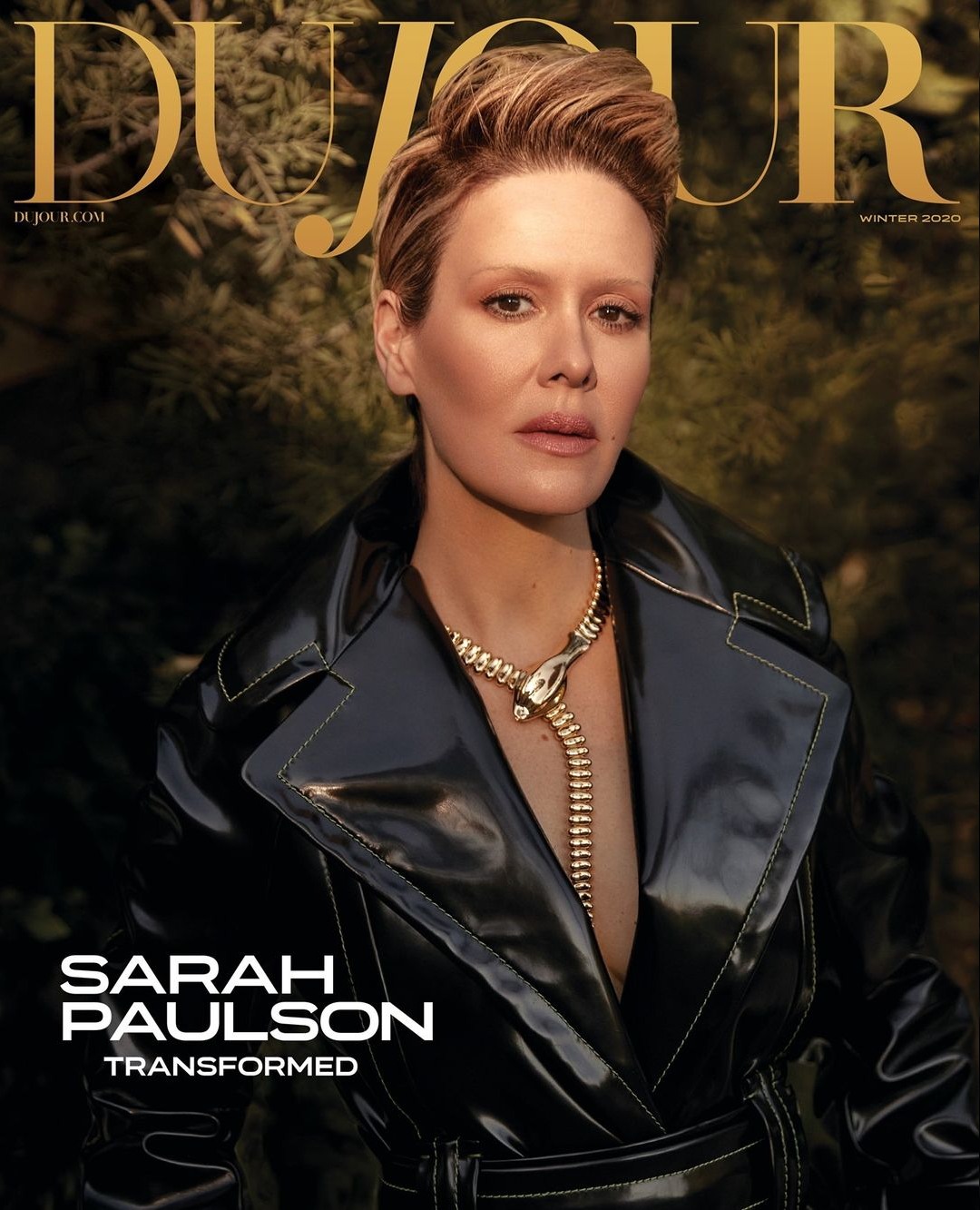 Sarah Paulson covers the latest issue of DuJour to promote her upcoming role in Impeachment: American Crime Story, about President Clinton’s impeachment drama in the 1990s. Guess who she plays? Linda Tripp. If you’re old enough to remember that drama, the idea of Paulson-as-Tripp is interesting but… somehow also kind of wrong. Tripp was such a terrible person and Paulson is, frankly, way too thin and pretty to play her. You can read Paulson’s full interview here. Some highlights:

Why she’s attracted to complicated roles: “I’m not looking for something specific in a role but looking for an internal bell that lets me know when I’m afraid of something. When I don’t see a path toward it clearly, I know that means I have to do it. I like to be as far away from me as possible. The more terrified I am of a role, the more likely I am to say yes.”

Why she loves working with Ryan Murphy: “Ryan Murphy is such a feminist and such an amplifier of women—really, of any disenfranchised group. He really puts a spotlight on women and storytelling for women over 45 years old. We’re real friends,” she says of Murphy, with whom she talks on the phone for hours regularly (even when she spends her days on set with him). “It’s a platonic love story.”

On Linda Tripp: “What was interesting to me is this story is really about these three women: Paula Jones, Monica Lewinsky and Linda Tripp. There is one predominant thing that we forget: that these are human beings and multidimensional people. This series gives you an opportunity to understand some of the behavior. I have more in common with Linda than I care to admit. My impatience, my desire for everything to be just so. I can tap into that with Linda. I felt a connection with her.”

She got a puppy in 2020: Like many of us, Paulson has survived 2020 thanks to a new puppy (Winifred T. Paulson or Winnie—the “T” is for Paulson’s partner of five years, Holland Taylor).

Her relationship with Holland Taylor: Paulson and Taylor maintain separate homes in Los Angeles—for those worried about Winnie, she travels back and forth. “We are both really independent, and there is a fluidity and elasticity to our living arrangement that works well for both of us and takes the pressure off. It’s been a good thing to allow a change of scenery. It’s such a blessing to not feel injured by wanting that space. We’re not so interested in a total mutation of our ways.” Plus, since November, both actresses have been back on set (Paulson is currently filming Impeachment and Taylor is filming a streaming series). “Frankly, the dog is the one who’s really suffering.”

For some reason, I thought Holland Taylor and Sarah Paulson lived together in New York? Why did I believe that? I have no idea. I guess I just thought of them as a New York couple. It’s interesting that they live apart and maintain those separate residences though – it sounds like a great situation, honestly. Joint custody of a dog, being in a fulfilling relationship and still having your own space and independence. That’s the dream for a lot of people! As for what she says about Linda Tripp… yeah, I get that the story is probably ripe for a second look and some humanizing, but I remember those days well and Linda Tripp was 100% the villain of the story. If anything, I’m looking forward to seeing a sympathetic look at Monica Lewinsky, but Tripp screwed over Monica so badly.

20 Responses to “Sarah Paulson: ‘I have more in common with Linda Tripp than I care to admit’”