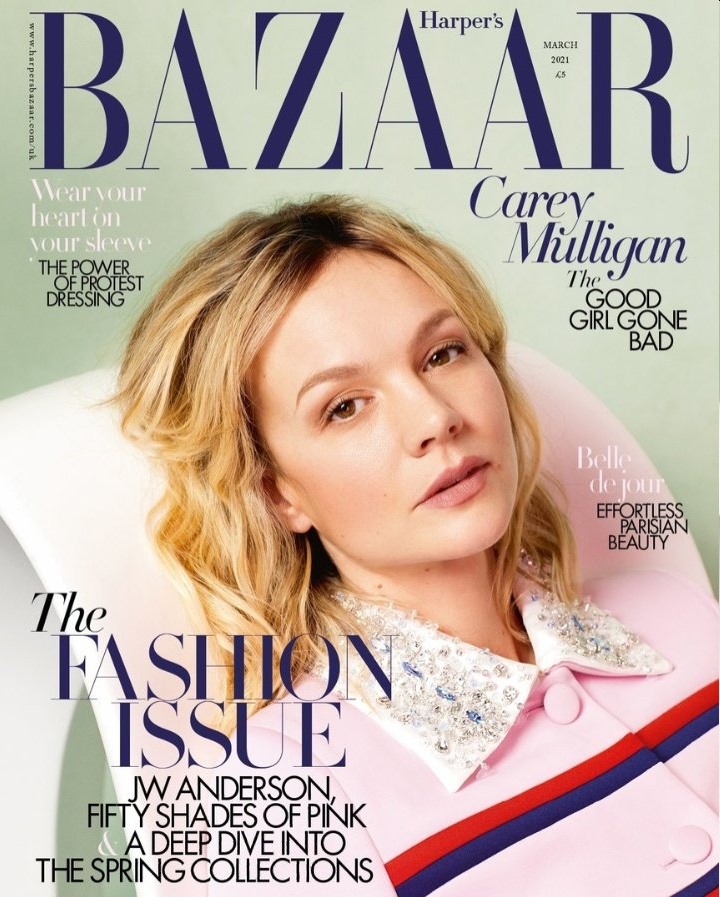 Carey Mulligan covers the latest issue of Harper’s Bazaar UK, mostly to promote Promising Young Woman and The Dig. I think this is more about her Oscar campaign for PYW, and I’m fine with that. Most actors have found ways to campaign for awards even in this bizarre pandemic year. Just because we think Carey is probably rolling her eyes at the thought of actually “campaigning,” we don’t know what she’s contractually obligated to do, and plus – she’s really proud of Promising Young Woman, and she wants to talk about the movie. You can read the full Bazaar interview here (the interview was conducted over Zoom). Some highlights:

Being home for a year after years on the road: “I’ve never been able to be part of a book club… Lots of people were learning to knit. I got knitting stuff at the beginning of lockdown and I tried it once, and was like, I don’t have f–king time to knit. I can’t do this. I can’t learn anything. I’m just going to keep the children entertained and then go to bed and do it again.”

Why she did PYW: “When the script came to my agent. I just didn’t know what to do with it. I thought, ‘Why would Emerald ask me to do this?'”

She used to do tons of research on her roles: “[It was] all qualification:– I didn’t go to drama school, I kind of felt like a chancer, so I figured that I had to do loads of homework so that I was allowed to be here.” Currently, things are a little different, she says, laughing. “The reality of my life now is that I have two kids under the age of five, and I’m lucky if I can learn my lines and show up.”

She hopes she’s part of a new wave of female storytelling: “We are finally understanding that audiences want to see stories about women who aren’t necessarily always nice… You still root for them, you still care about them – it’s brilliantly done in Fleabag, and brilliantly done in I May Destroy You. Some of the stuff that both of those characters do is totally morally questionable and unpleasant, but you’re 100 per cent behind them, the whole way through… I certainly didn’t feel any of this kind of activity for the first decade I was working.”

She thought Woody Allen’s Blue Jasmine was a game-changer: In her view, a game-changing moment was Blue Jasmine, the 2013 Woody Allen film in which Cate Blanchett played the title role, winning an Oscar for her performance. “I remember thinking, ‘Oh, there’s loads of brilliant, complex parts being written for women,'” says Mulligan. But after that, things seemed to regress again: “It was like one step forwards, two steps back.”

Carey never says anything one way or the other about Woody Allen and his…severe issues, but Bazaar editorialized and was basically like “Woody’s problematic, etc.” All that being said, I sort of understood what she meant about Blue Jasmine, which I think was the last Woody Allen movie I saw? It was years ago, and Cate Blanchett played a character who was so unlikeable, it was kind of a revelation – “oh, you dislike this character and yet you feel compelled to watch her.” Men get those kinds of roles all the time.