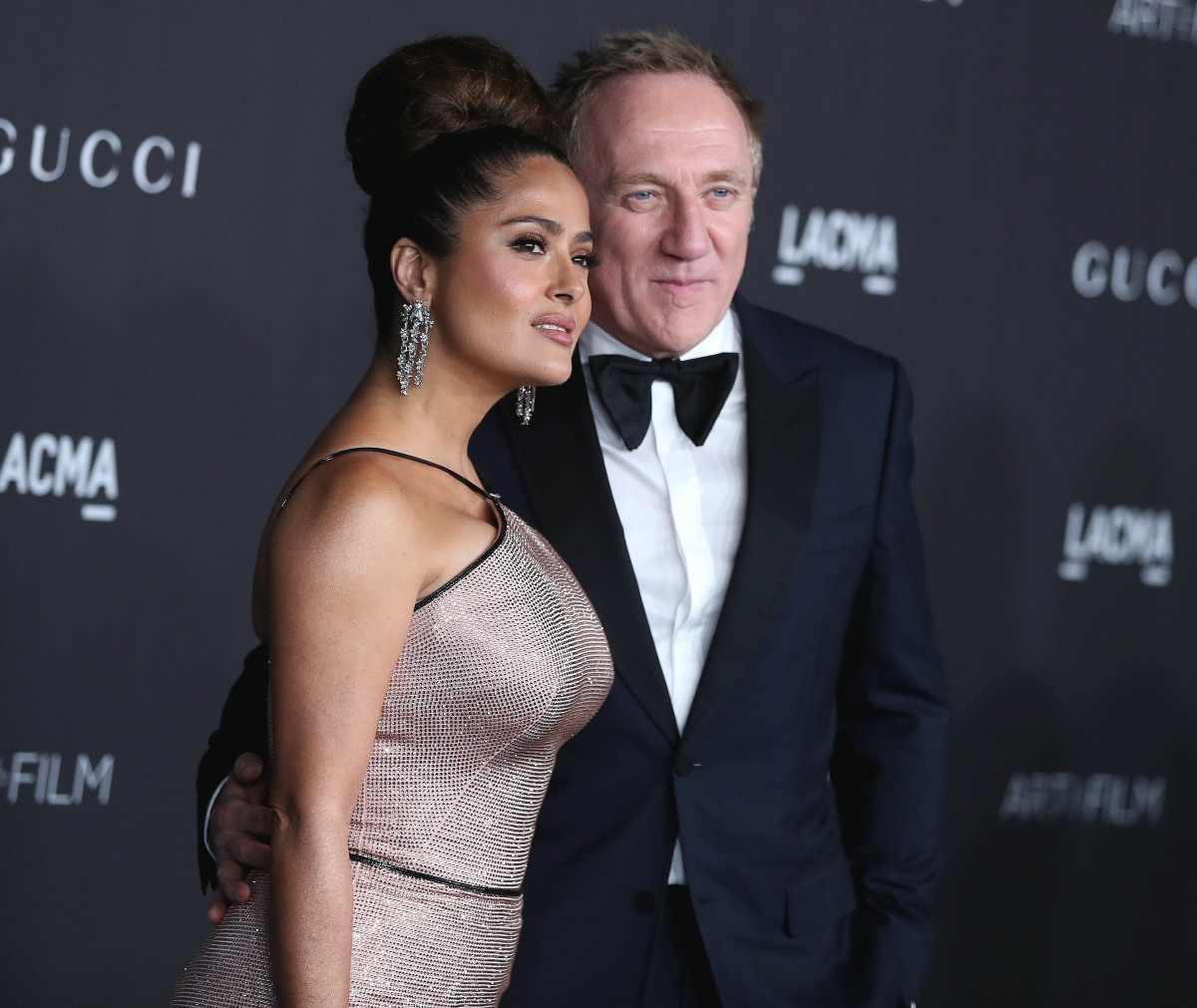 Salma Hayek is François-Henri Pinault’s second wife. They married in 2009, after she gave birth to their daughter Valentina. Their relationship was big news at the time, and they were part of a tabloid storyline because Pinault seemingly overlapped the start of his relationship with Hayek with the end of his relationship with Linda Evangelista, and then Linda had to sue Pinault for child support for their son. Crazy times back then for gossip. Anyway, Pinault and Evangelista eventually worked out their child support drama because Pinault is a for-real billionaire and, in context, what Linda was asking for was a drop in the bucket of his wealth. Salma stayed with him and she’s a very happy wife, and she defends him constantly. She’s always talking about the strength of their marriage and making him sound like he’s wonderful in every way. She did the same when she appeared on Dax Shepard’s Armchair Expert podcast:

Salma Hayek is opening up about her marriage to her husband François-Henri Pinault. Hayek, 54, explained how Pinault, 58, has made her a “much better person” on Monday’s episode of the Armchair Expert podcast.

“Can I say something about your husband, really quick? What a f—— nice, fun, generous, nice warm guy. He’s super sexy too,” co-host Dax Shepard told the actress. He added, “I’m gonna be honest, I didn’t know who he was, I just heard or maybe read in a headline that you had married a really rich guy. Maybe that’s why she married him.”

Hayek responded, “You know the thing is that in pictures you cannot begin to guess the magic in him. He’s made me become a much better person, and grow in such a good, healthy way. And, you know, when I married him, everybody said, ‘Oh, it’s arranged marriage, she married him for the money.’ I’m like, ‘Yeah, whatever, bitch. Think what you want.’ Fifteen years together, and we are strong in love. And I don’t even get offended, I’m like, ‘Yeah, whatever,’ ” she said.

The Like a Boss actor then defended her husband’s character and said, “My guy, finished work, no matter how hard it was — and trust me he has a lot of responsibilities — big smile on his face, happy to be home, happy to see me and the kids, make us laugh. We go on vacation, he completely shuts off, he’s in the moment. It’s not just an insult to me. I’m not the one being judged only. They cannot begin to imagine what a joy that human being is.”

I’ll be honest, if I was a billionaire’s trophy wife, I would be doing the exact same thing as Salma. “You don’t know him, you guys, you’re prejudiced against rich white men, this is discrimination!” And then I would get into the Lambo and pick up some sapphire jewelry for myself using his credit card. I am that f–king shameless. Kiss my ass, peasants! My rich husband is amazing! Anyway, Salma and Francois genuinely seem happy with each other and whatever, it is what it is and I’m happy for them. But no, it’s not “discrimination,” Salma. Jesus. 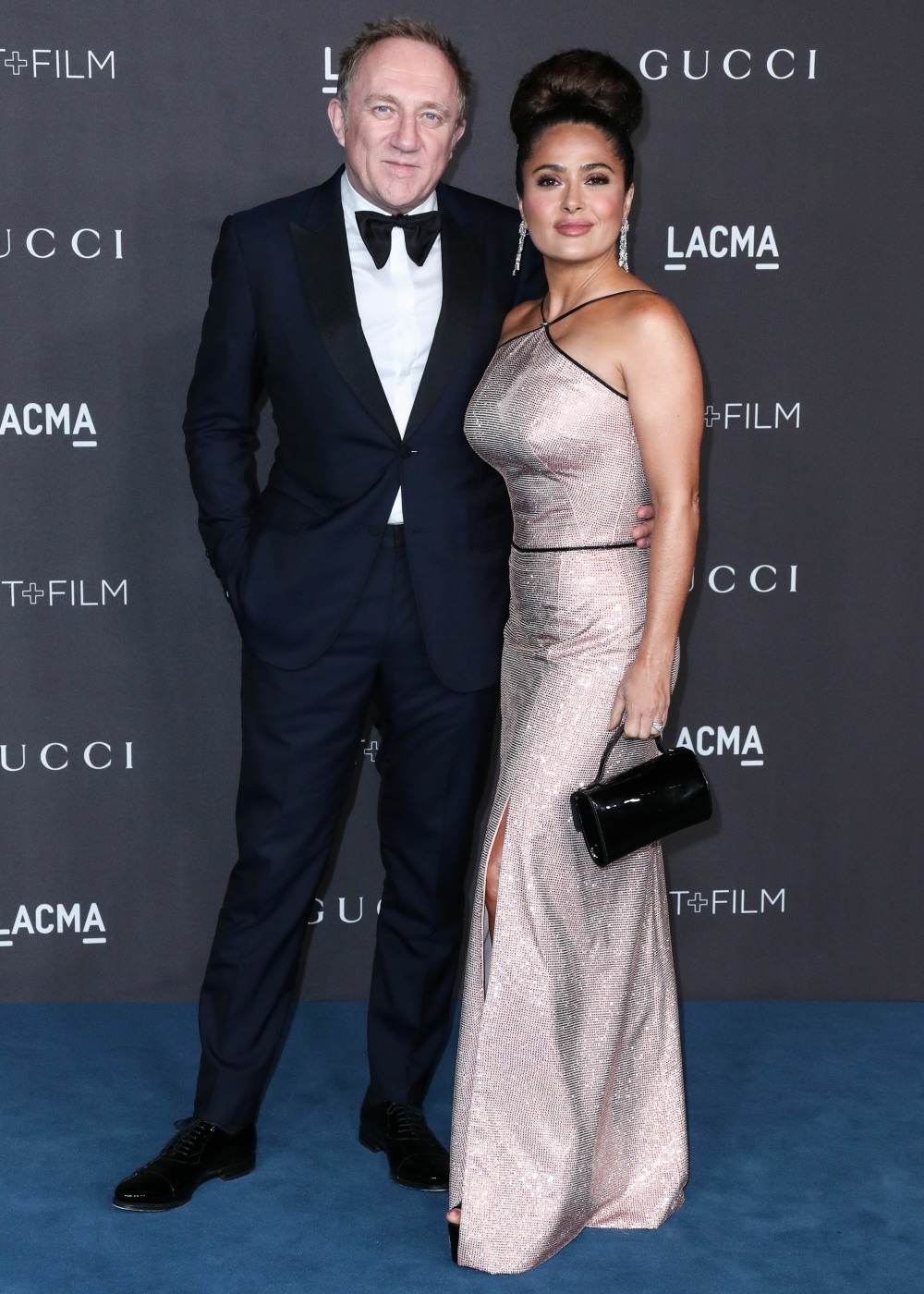