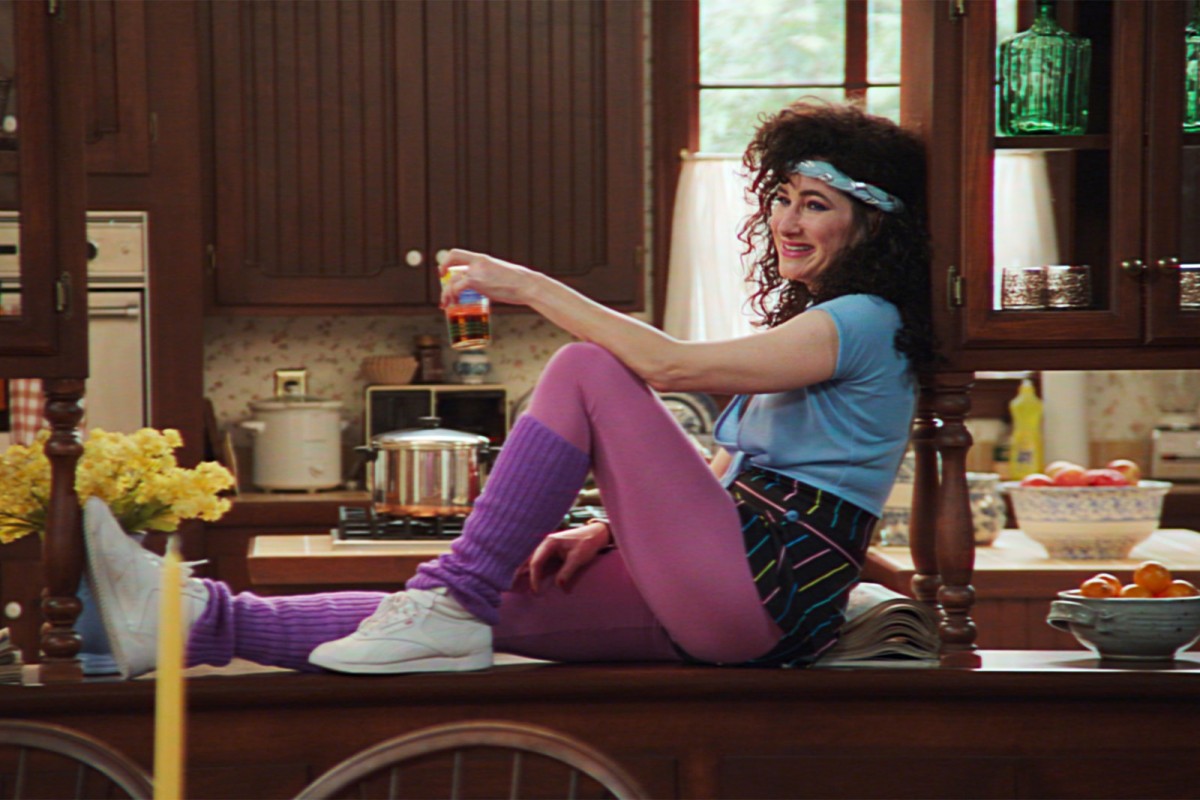 I’m not going to post any WandaVision spoilers because that would make me a hypocrite (although I’ve been called worse) and I would ask that you avoid them in the comments. It’s not a spoiler to say that Kathryn Hahn is a standout as Agatha. Everyone wants her to star in all the things because she is an incredible actress. Kathryn, 47, is also somewhat of a throwback in that she’s not on social media and only got a computer this year when her family insisted on it. (She used to use an iPad and get their help for tech things.) Kathryn has a new interview with Vanity Fair where they asked her about her experience in the 80s. She answered in terms of technology, beauty and fashion, which I could really relate to.

The show hops through sitcom eras. Which period did you find yourself wanting to linger in?
I think the ’80s because I’m a kid of the ’80s, so it always feels really nostalgic—that kind of music; even the clothes I got to wear were just my dream clothes. I was, like, Oh, just like Isabel Marant right now: fold-over black pants and mules and a French cuff. I would say probably the ’80s because it’s all closest to home, style-wise. I love big hair.

What was your own experience in the ’80s growing up in Ohio? Did you have a perm or feathered bangs full of hairspray? Was there a Jane Fonda cassette in the VCR?
There was not a Jane Fonda cassette, but my dad, I remember, purchased a rewind machine. I don’t even know if you know what those are, but if you wanted to preserve your VCR, you would get a separate machine that would just rewind your tape before you returned them to the library or Blockbuster. It was as big as your VCR, and it would sit on top of or beneath your VCR—and it was just simply to rewind, so you wouldn’t wear out your VCR. And I did all of it. I had a perm, but then I never got another perm, so I had straight hair and then just fried perm hair on the bottom. And I would put in Sun-In—do you remember it? It was a [lightening] spray. Going back to the ’80s, I smell Nair. I smell Jean Naté After Bath Splash, of which we had, like, a gallon that turned into probably rubbing alcohol. You never could finish it. I just see so much Aqua Net on my hair, trying to get my bangs to pick up and they just never did. I got a leather motorcycle jacket, for, like, a hundred bucks, that I wore the shit out of. And then I had a mesh—literally a mesh—vest that was hot pink that I would wear over a shirt with a piano keys tie. I just thought I was so cool. And maybe I was! Probably not. I really wanted it all to go together, but it just never gelled for me.

I had a big perm and huge hair in the 80s too! I never had those dumb storybook bangs though, I like to think I was too smart for that. She really captured our beauty products with that list. I would also add Avon Skin so Soft and Love’s Baby Soft. Plus she nailed it with the expensive leather jacket! I still have the one I bought when I was 17 and it still fits, although I got a really big one because that was the style. As for the technology we didn’t have a rewind machine but my friend Jen did at her house. They had it set up on a side table and I remember thinking how handy it must have been for all the tapes we would borrow from the local video store. When we got a VCR it was a game changer for our family.

Later on in the interview Kathryn talked about how director Matt Shakman writer Jac Schaeffer pitched WandaVision to her. She said she was “flabbergasted that this can exist in the MCU.” I was too. I was amazed at how audacious it was and how well it worked. Once I started to realize how it tied in to the Marvel universe it impressed me that much more. I’m a Marvel stan now and I’m definitely a Kathryn Hahn-looney.