Sharon Osbourne sent Carrie Ann Inaba flowers, did she send them to Sheryl or Elaine?


Embed from Getty Images
Another day, another shady ass story about Sharon Osbourne. The Talk returned on Monday after a month long hiatus. As you know, the hiatus happened after Sharon Karened all over her Black cohosts. In response, Sharon and her friends gaslighted Black women and made Sharon, the aggressor, the victim. Now the show is back with Carrie Ann Inaba returning from a medical hiatus and wouldn’t you know that Carrie took the time to post a video of the flowers she received from Sharon Osbourne and the crew of The Talk. What’s unclear is if Sharon sent the flowers to Carrie as a get well gift, as a slight to Sheryl Underwood and Elaine Welteroth or both. My question is, did CBS send flowers to Sheryl and Elaine after the experience they had with Sharon? Their card referenced her work on the “important hour of television” she filmed on Monday. Did Sharon try to send Elaine and Sheryl flowers as a way to apologize? Below is more on the story via Hello!:

Sharon has remained good friends with some of her fellow co-stars though, as Carrie Ann Inaba publically [sic] showed her support for the star in a heartfelt post on Instagram.

Taking to Instagram Stories, Carrie shared a photo of a beautiful bouquet of flowers that the former X Factor judge had sent her.

The Dancing with the Stars judge has been suffering from severe pain over the past few weeks, and the flowers were a thoughtful gesture.

Along with the bouquet, Sharon had sent her friend a note, which read: “Dearest Carrie Ann. Thinking of you. Be fabulous. Love Sharon.”

Carrie wrote alongside the picture: “Thank you @sharonosbourne. Thinking of you too.”

As well as receiving flowers from Sharon, Carrie was also given a beautiful bunch of roses from the crew at CBS.

They had added a note too, reading: “Dear Carrie, welcome back and congratulations on filming an important and moving hour of television yesterday.

“We appreciate all the conversations, training and care that went into getting us back on air. Thank you. We’re excited to start talking again! Georg, David, Kelly, Thom, David, Amy and Lauria.”

Listen, I am tired of Sharon inserting herself into the public sphere even if it is low key. And I need everyone to stop caping for her. Sharon created this situation for herself. Sharon could have avoided losing her job by either supporting Piers in private, by being a better person or simply not acting a damned fool all over national television. I bet if Sharon hadn’t left scorched earth these last few years, this exit would not have happened. Since we don’t know for sure if Sharon only sent Carrie flowers and not the other ladies of The Talk, I am just speculating that the move was meant to be shady. I am glad that Carrie is back on the show but if I were her I’d be cautious about who she aligns herself with. Sharon has a habit of pulling other folks down with her. The good news is that we don’t have to worry about seeing Piers Morgan or Sharon Osbourne on American television outside of Fox and Extra. 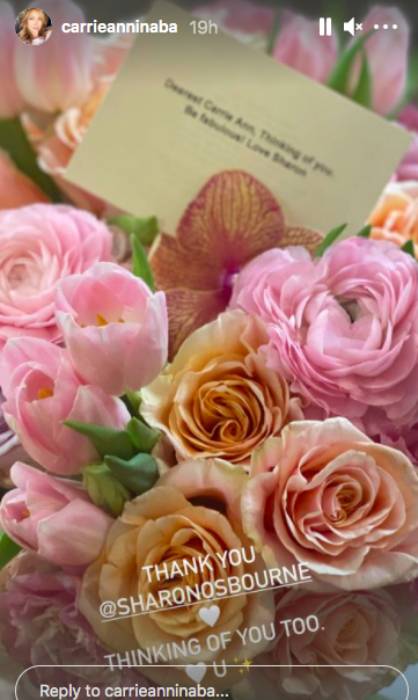 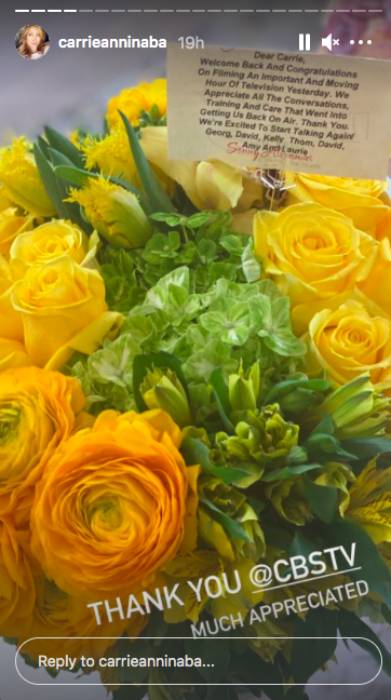 6 Responses to “Sharon Osbourne sent Carrie Ann Inaba flowers, did she send them to Sheryl or Elaine?”