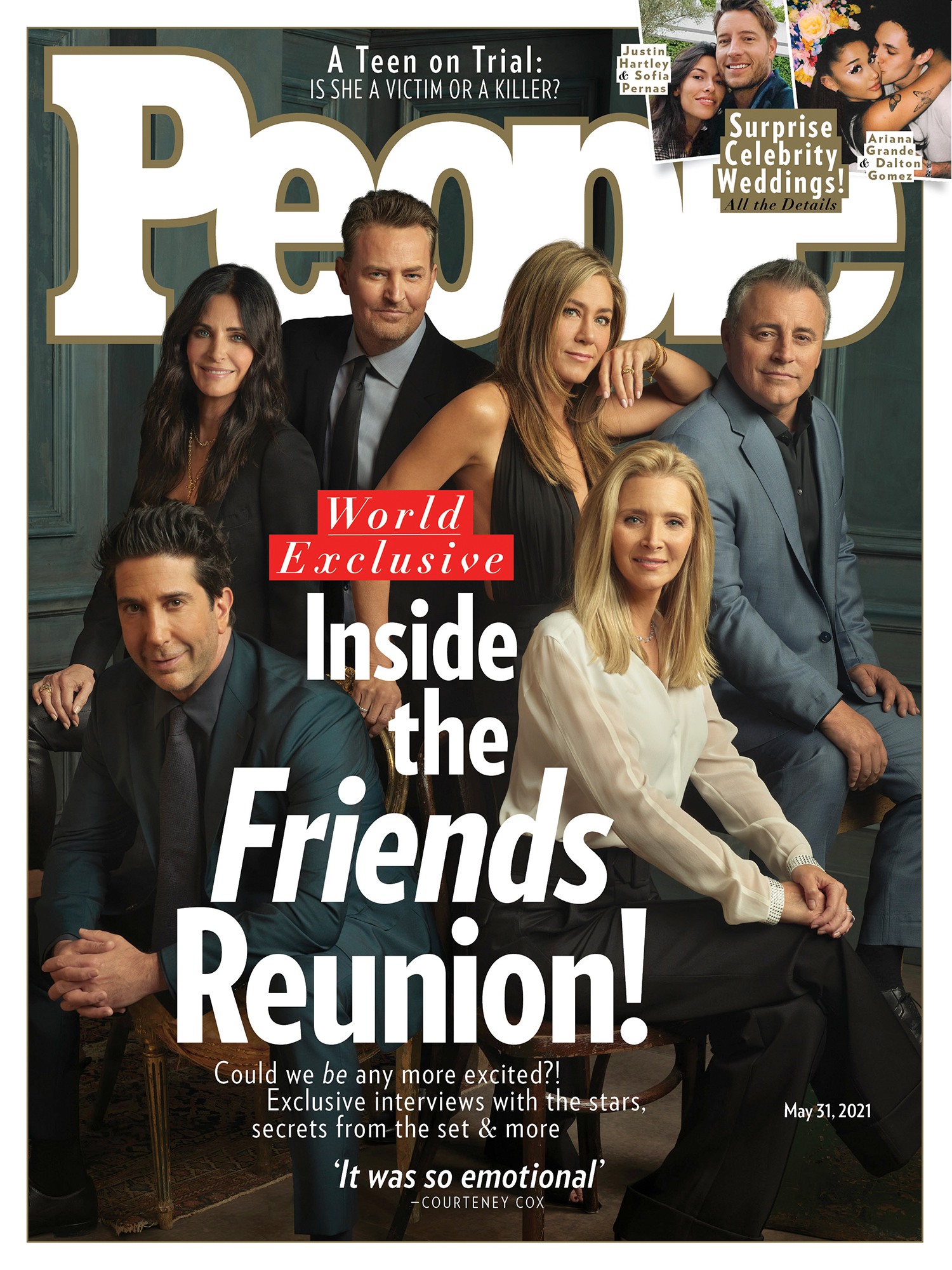 It sometimes amazes me how much energy there still is around Friends, a show which started 27 years ago and ended 17 years ago. I’m choosing to believe that the youths enjoy it because the writing was good (albeit quite dated in today’s world) and because it’s about hanging out and friendships in a pre-social media world. Like, yes, people really used to live like that, sort of. We talked to people in person and people weren’t on their phones constantly. Friends has enjoyed a second and third life on streaming services and in reruns, which is why the actors got massive paychecks to show up for a “reunion” for HBO. To promote it, People Magazine put the Friends actors on this week’s cover. We really are in a time loop and we’ve gone back to 2002 for some reason.

There were tears at the reunion: Walking back onto Stage 24 at Warner Bros. studios, the former castmates — Jennifer Aniston, Courteney Cox, Lisa Kudrow, Matt LeBlanc, Matthew Perry and David Schwimmer — were taken aback by the site of meticulously recreated sets of a world they hadn’t visited in 17 years: Joey and Chandler’s bachelor pad, Monica and Rachel’s apartment, even Central Perk, where the thrift-store-find orange couch was always reserved for them. “I was flooded with 10 years of irreplaceable memories,” Cox, 56, tells PEOPLE exclusively in this week’s cover story.

A read-through is part of the special: From reminiscing about the show and performing a table read of part of “The One with The Jellyfish” episode to even re-imagining the epic trivia game from season 4 when Joey and Chandler won Monica and Rachel’s apartment, the reunion special also features special guests — like Reese Witherspoon (who played Rachel’s sister), superfan Lady Gaga as well as David Beckham and Justin Bieber.

Where they think their characters would be now: While the special is unscripted, the cast members each have an idea of what their characters would be doing today. “I would like to have maybe started a clothing line of my own, and it’s sort of a small franchise,” says Aniston of Rachel. “Like a Nili Lotan. And I live in New York City on the Upper East Side.” For Cox, “I always just feel like Monica would be doing something competitively with other mothers and trying to outdo them,” she says. “Whether it’s the bake sale at school or something. I mean, she’d be so annoying. She’d be at the head of the PTA or something.”

Phoebe & the rest of them: Kudrow thinks Phoebe “is living in Connecticut with Mike and their kids, and she’s in charge of the arts program for the school,” the actress says. “And just … the advocate for her kids because they’re different like she was.” Chandler “would be a wonderful father,” says Perry, 51. “And a wonderful comedy writer.” LeBlanc says Joey “would have opened a chain of sandwich shops.” Adds Perry: “And eaten all the sandwiches.” As for Ross, aside from “playin’ with the bones” as a paleontologist, Schwimmer, 54, says “he would’ve invested in Joey’s sandwich shop and lost a lot of his savings for his kids.”

LOL I guess we’re going to pretend that LeBlanc’s spinoff show never happened! That’s fine, no one watched it anyway. Didn’t Joey move to LA though? I thought that was the premise. And I don’t think Phoebe would be living in Connecticut with Mike! Surely she would still be living in the city? Anyway, HBO dropped a promo, and People Magazine had a video too. Just FYI: the cast members got something like $2.5 million each to show up for one day, hang out together, play games and knock out all of the promo at the same time.