Quinta Brunson: Memes are a form of communication that shouldn’t be dismissed


I discovered Quinta Brunson years ago through her hilarious Buzzfeed videos and later watched her on A Black Lady Sketch Show. Quinta is hysterical and her face is hella expressive. Quinta’s expressive face led her to be one of the first people to be made into a meme. Quinta became the “He Got Money” meme, from a sketch that she did about a man who bought her popcorn and skittles at the movies. That became the inspiration for her new book, She Memes Well. Quinta was on Seth Myers’ show this week. She said that she keeps her family from watching her shows and reading her books. Quinta also hilariously recalled how she got her name. She said that her mother was just too tired to even try and they decided to name her Quinta because she was the fifth and final child. Below are a few highlights from that:

On memes
Memes are a form of communication that shouldn’t be dismissed because it’s how an entire culture of people communicate. Sometimes memes say what I can’t. It gives the emotion that I mean to give that too many words can kill.

On how her mom came up with her name
My mom came up with the beautiful name of Quinta by being too tired because I came too late in her life to think of anything else other than the number of the child I am. I’m number five. My brothers and sisters have like “prince of faith,” “princess of Africa” and I’m just five. I kind of like it, it gave me some freedom in my life.

Quinta is funny, smart and beautiful. She is absolutely hilarious because she has such dry, deadpan humor. I like how her voice may be conveying one thing but her face is saying something wholly different. I thought it was hysterical that she ruined a prank because she couldn’t hide the disappointment on her face. The fact that the film team wanted to pay her $1000 instead of $50 because she was so expressive is even funnier. My favorite part of this interview was the back and forth between Quinta and Seth because Seth was “upset” he wasn’t mentioned in her book like her other castmates. You could tell that Quinta and Seth are actual friends and it was so cute. I am still laughing at the fact that her mom was too tired to give her a name like her siblings and opted for naming her a number. I mean Quinta can always claim that she started the trend of naming your children numbers like Blue IV. My aunt named me from a name she saw in the phone book because she thought the name was pretty. I was supposed to be a Tangela (don’t ask). I look forward to Quinta’s book. I am sure there will be many funny anecdotes in it. I am also looking forward to Quinta’s new show that she created called Abbott Elementary, which will air on ABC. In the meantime, I need to catch up on A Black Lady Sketch Show. It’s been a minute and those women always manage to make me cackle. 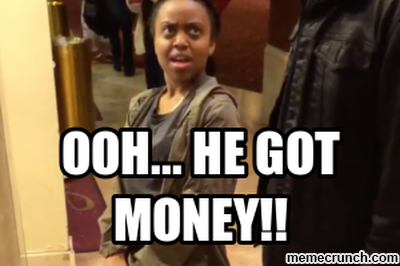 13 Responses to “Quinta Brunson: Memes are a form of communication that shouldn’t be dismissed”