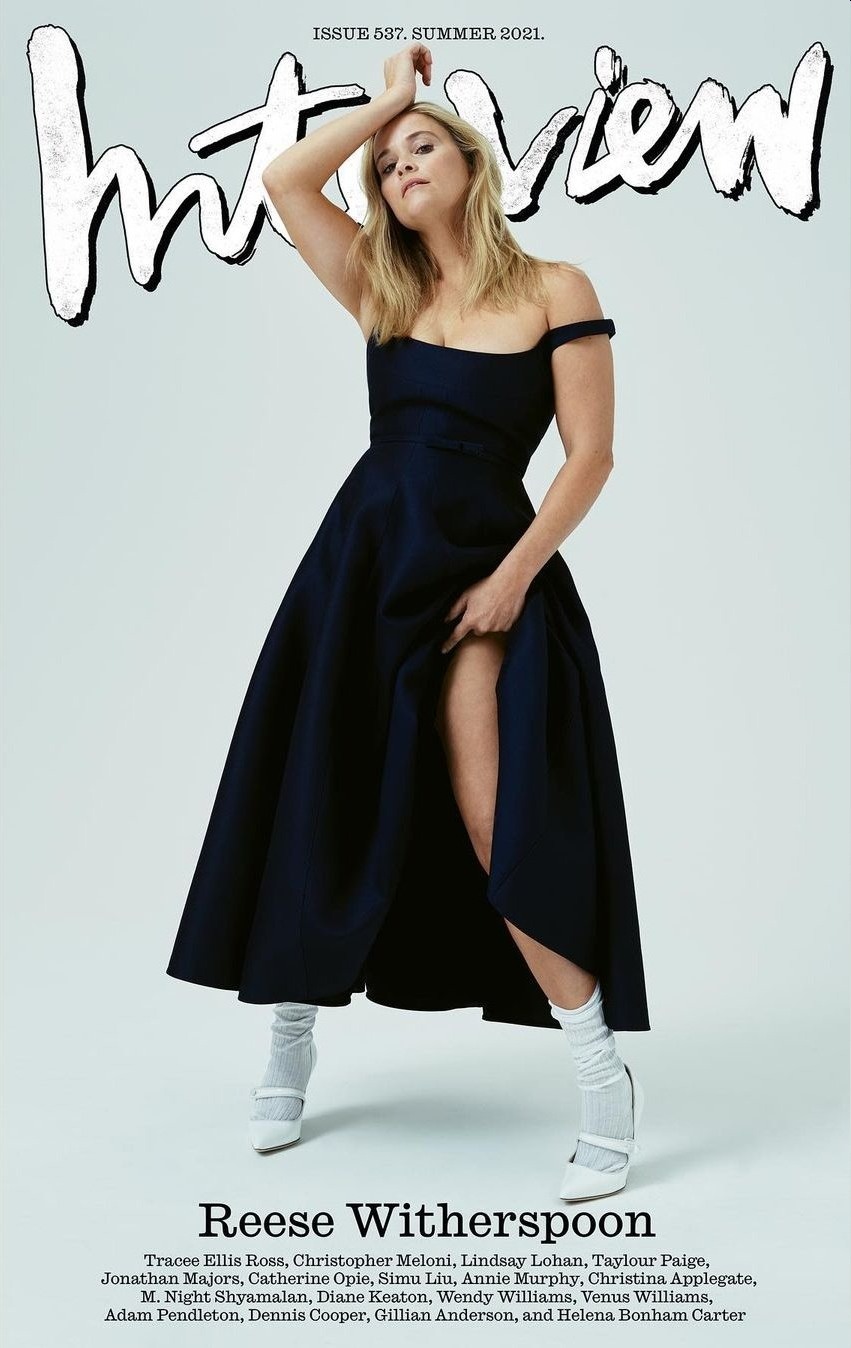 I don’t even have words for how much I dislike this Interview Magazine cover of Reese Witherspoon. The Mary Janes with socks, the hiked up dress, the pose. What a terrible shot and what terrible styling. Thankfully, the interview is a lot better than the photo editorial. Tracee Ellis Ross interviewed Reese and their conversation was really good and substantive. They spoke at length about selling movies and TV shows internationally, the nitty-gritty of producing and financing projects and whether there is an audience for female-led projects. You can read the full piece here. Some highlights:

How Reese defines herself: “Oh, gosh. I’m a mom first. I’m somebody’s daughter. I’ve worked around teams since I was 14 years old, so I definitely think I’m a team leader at this point. I can safely say that. I’m a doer. I don’t like to talk about things for too long, I like to just do them. If they can’t be done, I like to do them and move on.

Reese on passion & having female friends: “I now know what I’m good at, and I know what I’m not good at. My passions have become more intensified as I’ve gotten older. I truly believe that like-minded people who get together and push toward a greater good can create real change in this world. I only believe that because of the friendships I’ve made with extraordinary women like you over the past, I’d say, four years. Before that, I felt so lonely, and it was really hard for me because a lot of the conversations I was having in rooms in Hollywood, well, I felt like I was the only one having them. When we all started getting together and meeting, I realized that women were having the same conversations across town in a different boardroom or on a different set, and it was enormously comforting to know that I wasn’t pushing a rock up a hill. It’s still a lot of effort, but it felt more effortless with you guys involved. And since then, the support that’s been created by this group of women feels like I have a chorus behind me.

Women need to talk about money: “The other thing that really drives me nuts is that women aren’t encouraged to have conversations about financial literacy. And when things drive me crazy long enough, I feel like I’ve got to go do something about it, and it takes me a while to figure out what to do, but I’ll bring it up to literally everybody who crosses my path. You know me as the “How will this make money?” and “Where is the revenue stream?” girl.

Artists have more power than they realize: “We’re in a really unique time where streaming has emerged and social media has become such an important tool for marketing and connecting to audiences. There are so many ways for artists to monetize. But it’s a maze to navigate. I’m always looking for solutions to help build wealth not just for white women, but for Black women, for Latinx women.”

How should women invest: “I truly believe if women have more money, they invest it in themselves, in their families. And when you look at the stats on what women own, whether it’s home ownership or having any assets, we have got great lengths to go to find equity. Even if we’re making more money, are we getting educated about how to invest? When I first started making money, no one would bring me business opportunities. I was watching my peers, who were men, constantly investing in things like Uber and Google because they hung out with the founders. And I asked other high-profile women, “Were you offered this opportunity?” The answer across the board was no. How you use the money that you get is just as important.

Reese also talked a lot about the skewed perceptions and overreliance on biased data within Hollywood, which I found fascinating but I’m a nerd that way. She emphasized that when she has gone into meetings with studios and mega-producers, she’s been told repeatedly that “women-led projects won’t sell overseas” or that only male consumers count, and then there’s all of this skewed, biased data to back up those perceptions because Hollywood has spent decades reinforcing it. As for what she says about financial literacy and women needing to invest like men… I completely agree. Women need to talk about money a lot more. We need to talk about money with each other, and we need to talk about money with men too. There *are* male allies who want women to get paid, who want to be able to have these conversations openly with women too.