Tesla is introducing a robot: ‘you can run away from it, overpower it’ 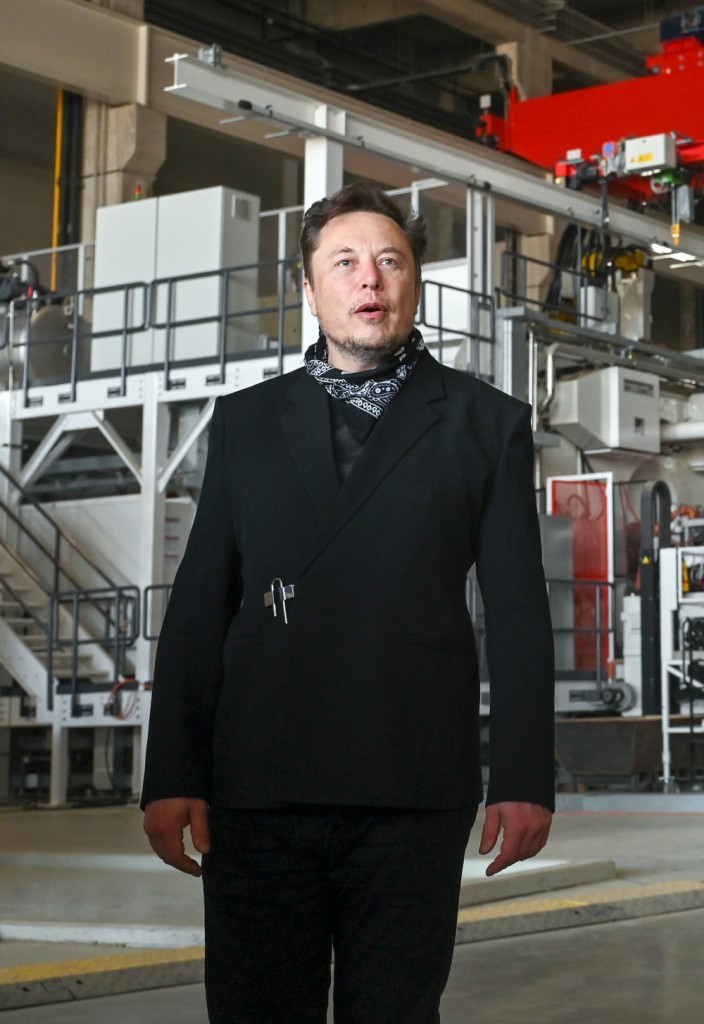 What do you think Elon Musk thinks about as he whiles away the hours in his tiny house in Texas? I’ll tell you – he’s figuring out how to build a robot army to take over the world! Although, according to Musk, his robots will be nice robots who just do the stuff we don’t want to. Mm’hmm. At last week’s AI Day, Musk took the Tesla stage and personally unveiled the model for what he hopes will be the Telsa Bot, a humanoid robot about 5’ 8” tall that is designed to perform mundane or dangerous tasks if we’d like it to. Musk reassured his audience that his Tesla Bots are “intended to be friendly” and are programed to allow most humans to outrun them, I guess so we can escape the inevitable robot revolt.

Tesla just hosted an event called AI Day, during which chief executive and space-fancier Elon Musk announced that the company is aiming to launch a humanoid robot prototype, called the Tesla Bot, in 2022.

Musk said the robot is designed to do “boring, repetitive and dangerous” work, giving examples such as attaching bolts with a spanner or picking up your shopping, and said it will have “profound implications for the economy.”

“It’s intended to be friendly, of course, navigate through a world built for humans, and eliminate boring, repetitive, dangerous tasks.”

“We’re doing it so at a mechanical level, at a physical level, you can run away from it, and most likely overpower it,” Musk said, and even he couldn’t avoid laughing. “So hopefully that doesn’t ever happen but you never know.”

The robots will be 1.7m tall and weigh 125lb, with the ability to carry 45lbs, deadlift 150lbs, and arm extend lift 10lbs. You’ll be able to run away from it, if you’re in decent nick yourself, because it will move at a top speed of 5mph.

The most freaky element, though this wasn’t demonstrated, is that it has a face screen where a humanoid face will appear to impart “useful information.” Apparently a key aim is that it’s not “super expensive.” We’ll have to wait and see on that one.

[From PC Gamer via OMG]

I’m open to an argument for robots taking on dangerous tasks like bomb diffusing et al. I’m sure there are as many counter arguments about making decisions in high pressure situations and such. In Musk’s presentation, he hypothesizes that they will be able to program these bots to make those choices. I’ve read way too many Sci-Fi novels that told me how this ends up so my first reaction to this is, “No!” But the truth is, it’s just new and I can’t comprehend it. Musk laughed when he said these bots are “intended to be friendly” and we were supposed to be able to overpower them. Neither of my parents could. What if there’s only one package of tortillas left at the store and both my mom and the robot wanted them? Who is the bot “friendly” to, the old lady or the one who employs it? The point Musk keeps making is these bots will eliminate labor. We can choose to do it if we want, but we will no longer have to. What about those that rely on labor positions for income? I know a lot of people that picked up Door Dash and Instacart shifts during lockdown to make ends meet. With self-driven Teslas acting as Ubers and these Bots acting as personal shoppers, aren’t we just screwing the middle and lower class once again?

However, as outlets are pointing out, I don’t need to get too excited about any of this yet. Musk makes a lot of promises that take a while to get here. Like his Tesla truck. And us occupying Mars. And sending himself to space. So far, this bot is a statue and a drawing, they don’t even have a working prototype. When a Telsa Bot walks across the stage, I can re-ask all these questions but for now, I will continue to schedule my weekly shopping trip and not worry about drones taking over the Winn Dixie.

Look at what Will Smith posted on his Instagram. #TeslaBot pic.twitter.com/nuvfhoP6qU

19 Responses to “Tesla is introducing a robot: ‘you can run away from it, overpower it’”