Kid Rock’s band members have covid, he claims some are vaccinated

Kid Rock and his band played at the Sturgis Bike Rally, which is looking to become an annual super-spreader event, evidently. Shockingly, playing to a 700K crowd of unmasked, anti-vaxx people packed together with no regard for their health or anyone else’s resulted in many in Kid’s band testing positive for COVID. So Kid was forced to cancel a few shows and he tweeted about it. In his tweets, he screamed at liberals, of course, because of K-Rock Logic. He tried to stem any criticism by letting us (the sh*t for brains bloggers) know that he and many of his bandmates are vaccinated so none of this is their fault. After a few rambling tweets, Kid was finally able to blame Pres. Biden for everything because he’s too weak to kill more people overseas. See? K-Rock Logic.

An angry Kid Rock canceled two concerts in Texas over the weekend after more than half of his band contracted COVID-19 following a jam-packed performance earlier this month during the motorcycle rally in Sturgis, South Dakota, that has been linked to almost 200 infections.

“I am pissed,” Kid Rock — whose real name is Bob Ritchie — tweeted Thursday. “Over half the band has fucking covid (not me), and before u shit for brains bloggers and media trolls run your mouths, many of them, like me, have been vaccinated.”

I’m not kidding about Kid being upset about Biden, that’s how he ended his rant. He claimed his anger was fueled by the deaths in Kabul, but he ended with a predictable swipe at Biden that served no purpose. Kid and krew played Sturgis as an eff you to those worried about the Delta variant. He thought he was safe because he got the vaccine and now, he and his band are all suffering the price for their hubris. I don’t have any more energy to waste on these people. Although I highly suspect Kid’s Twitter gesticulating was done because the shows were in Texas. He called Biden a p*ssy to deflect being called something similar by his Texan fans. Bunch of g-d children, all of them.

Speaking of deflection, it didn’t work. Maybe Kid didn’t get called names for cancelling but his misplaced anger certainly did not go unnoticed. Several people on Twitter weren’t having it:

Kid Rock owning the libs after playing to packed crowd at Sturgis. “There is nothing the mainstream media or internet or social media trolls can do but look at this pic and weep, knowing you will never beat us.”

Then tweet that upcoming shows all canceled because band has covid. pic.twitter.com/oqscgoQlHx

BREAKING: Pro-Trump rocker Kid Rock cancels concerts as most of his band catches COVID after headlining at the Sturgis “superspreader” motorcycle rally — where he bragged about the packed, maskless crowd & said the media couldn’t “stop” him. RT IF YOU THINK KID ROCK IS AN IDIOT!

After performing at the Sturgis super spreader motorcycle rally in South Dakota, MAGA lunatic Kid Rock has been forced to cancel future shows because most of his band contracted Covid as a result. This whilst saying media couldn’t stop him. No, looks like Covid did though. 🤣

Kid Rock has cancelled shows in Texas due to COVID in his band. His fan is very disappointed. 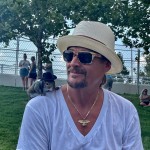 17 Responses to “Kid Rock’s band members have covid, he claims some are vaccinated”