Adele: ‘I’m a 33-year-old divorced mother of a son, who’s actually in charge’ 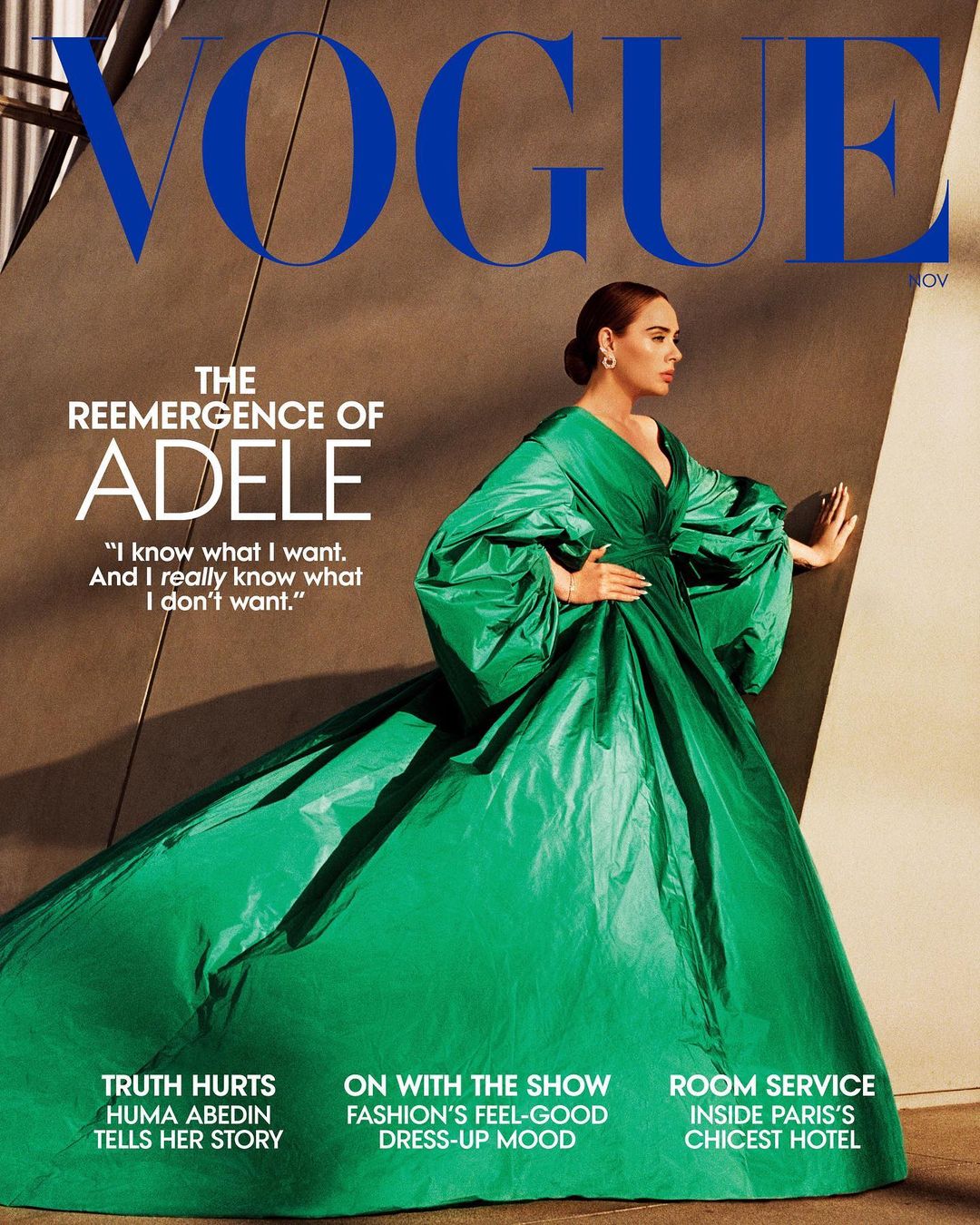 American Vogue did their own exclusive photoshoot with Adele for their November cover, and they totally bungled the cover shot. The rest of the editorial is lovely and interesting, and I’ll never understand how this image was chosen for the cover. Awful. I ended up reading Adele’s British Vogue and American Vogue interviews back-to-back. She’s in much the same headspace for both, although I feel like she’s just “lighter” and more laid-back in American Vogue. She’s obviously promoting her new album, and now that she’s in her 30s, having been a relative recluse for the past five years, she says she’s “getting ready to be famous again.” Yes! You can read the full Vogue piece here. Some highlights:

Drinking during the pandemic: “It got earlier and earlier, the drinking. My first emergency run at the grocery store was for Whispering Angel and ketchup,” Adele says, referring to her favorite rosé. “Whispering Angel turned me into a barking dog. It did not make me whisper.”

Her Saturn Return: “Then I hit my Saturn return. It’s where I lost the plot.” It takes 27 to 32 years for Saturn to fully orbit around the sun and return to the position it was in when you were born, Adele explains. “When that comes, it can rock your life.It shakes you up a bit: Who am I? What do I want to do? What makes me truly happy? All those things.”

Why her marriage ended: “I was just going through the motions and I wasn’t happy. Neither of us did anything wrong. Neither of us hurt each other or anything like that. It was just: I want my son to see me really love, and be loved. It’s really important to me. I’ve been on my journey to find my true happiness ever since.”

What got her through her Year of Anxiety? “It was a lot of sound baths. It was a lot of meditation. It was a lot of therapy. And a lot of time spent on my own.” The gym was key: “It became my time. I realized that when I was working out, I didn’t have any anxiety. It was never about losing weight. I thought, If I can make my body physically strong, and I can feel that and see that, then maybe one day I can make my emotions and my mind physically strong.” She started with her lower back and stomach: “I have a bad back and I had a C-section. So I had just nothing going on down there.”

She realized she was the common denominator in her relationships: “I realized that I was the problem. Cause all the other albums are like, You did this! You did that! F–k you! Why can’t you arrive for me? Then I was like: Oh, sh-t, I’m the running theme, actually. Maybe it’s me!”

On Rich Paul: “He was always there, I just didn’t see him,” she’d said. She tells me they met at a party a couple years ago. “I was a bit drunk. I said: Do you want to sign me? I’m an athlete now. He’s just so f–king funny. He was dancing. All the other guys were just sitting around. He was just dancing away.”

On her dating life: “[With Rich], I don’t feel anxious or nervous or frazzled. It’s quite the opposite. It’s wild…I’m a 33-year-old divorced mother of a son, who’s actually in charge. The last thing I need is someone who doesn’t know where they’re at, or what they want. I know what I want. And I really know what I don’t want.”

On her weight loss: “My body’s been objectified my entire career. It’s not just now. I understand why it’s a shock. I understand why some women especially were hurt. Visually I represented a lot of women. But I’m still the same person. The most brutal conversations were being had by other women about my body. I was very f–king disappointed with that. That hurt my feelings.”

The new album doesn’t have a “Hello” type song: “There isn’t a bombastic ‘Hello.’ But I don’t want another song like that. That song catapulted me in fame to another level that I don’t want to happen again. I’m not saying I’ve got ‘Hello’s in my pocket. I was just conscious that I didn’t want my story on this album to sound like that.”

This was so funny to me: “I’m not saying I’ve got ‘Hello’s in my pocket” - I love her but what the hell? She’s got “Hello”-level mega-hits in her pocket and she’s not handing them out? Come on. As for Adele being hurt by women judging her body… I do think that many women felt so protective of her and then she lost 100 lbs and we were like “um WHAT.” We felt attacked! Or something. And this: “Oh, sh-t, I’m the running theme, actually. Maybe it’s me!” When will Taylor??

She name-drops two famous women, two of her peers, in the Vogue article as well. She tells the story about winning the Grammy instead of Beyonce (when Bey was up for Lemonade). Adele was convinced that night that Bey would win and then it suddenly occurred to her that she might win instead. She ended up going to Beyonce’s dressing room twice (because Adele was crying) to tell Bey that B should have won and that what B is doing musically is out of this world and so important. Adele also told a funny story about how Angelo’s favorite artist is Taylor Swift, and she took him to one of Swift’s concerts in 2018 and he was amazed by the stadium full of people. Adele said, “I got really annoyed! I was like, Excuse me! This is what I do, you know. He said, When we go on tour, should I have a seat next to me with Taylor Swift’s name on it for Taylor to come?” Angelo is Snake Fam?!!