Cate Blanchett: White men in power are ‘on the edge of extinction & they’re panicking’ 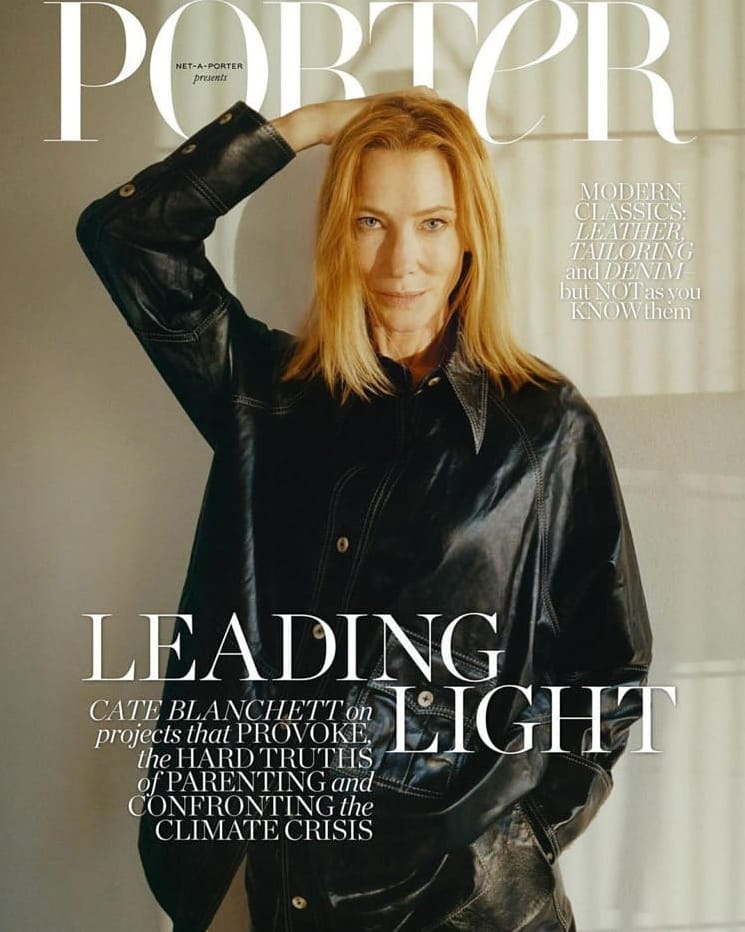 Cate Blanchett covers the latest issue of Porter Magazine, the in-house digital magazine of net-a-porter.com. She’s currently promoting Don’t Look Up (where she’s part of a huge A-list ensemble) and Guillermo del Toro’s Nightmare Alley, where I think she’s more of a supporting player as well. It feel like Cate just disappears for nine months at a time and then she reappears in time to promote three or four movies, then rinse and repeat. Cate was actually in a chatty mood for this interview, and she had a lot to say about social media, the environment, politics and a lot more. Some highlights:

Playing a TV anchor on ‘Don’t Look Up’: “Actually, it’s a revolting moment when you wash that makeup off and see the sludge going [down the drain]. It’s quite confronting.”

On global warming: “Everyone is trying to be positive, talking about 1.5 degrees of global warming. But 1.5 would still be disastrous. We need to be f–king scared… and demand change; be collectively courageous enough to face that fear and do something about it.”

On Nightmare Alley: “I definitely think this was something boiling in Guillermo. [The film] is a real dark night of the soul. You watch a man breaking the rules, getting away with it… and refusing to show sympathy or compassion.”

On “disastrous presidents” and populist leaders: “I’m hoping it’s a white-male ghost dance. They realize they’re on the edge of extinction and they’re panicking. We’re witnessing them in their death throes, which is why it’s so aggressive and destructive.” I ask if, on the contrary, such leaders could see a resurgence. “That’s why people have to vote. And exercise their power. I’m sounding like I’m on a soapbox, which I’m not interested in, but it’s important to not give in. I’m not giving up hope. As I say to my kids [on climate change], if we’re going out, how do we choose to go out? It’s a terrible conversation to have with your 13-year-old, isn’t it?”

She’s not interested in agitprop: “I couldn’t be less interested in agitprop [or] telling people what to think,” she says. But she is drawn to films that “ask provocative questions” and she isn’t afraid to get behind causes she believes in, such as Prince William’s Earthshot Prize. She also recognizes how fraught being outspoken in public can be. “You have to be judicious. I’ve been asked to do things by people and I’ve said, ‘I think I’m going to be a liability’.”

On polarized public discourse. “I’m very sad about the loss of genuine debate, where leaders, public intellectuals and everyday citizens try to find common ground, try to understand the issue, rather than try to win… Even in acting, people talk about [how] to ‘win’ the scene. No, we have to make the scene come alive. And we might have to lose a bit here, win a bit there.”

She talks to her kids about social media: “A lot. Because so much of our so-called information comes through social media. I’m old enough to have been taught at school what a primary, secondary and tertiary source is. I say to the children when they mention something, ‘Where did you read it? Who has [authenticated] that? You have to learn how to read an image and article. And if you’re going to share something, you’d better make sure you have checked the sources.’ Of course, they roll their eyes. But when you hear them talk to their friends, I think they’re responsible. My son is studying physics and philosophy, so he is really interesting to talk to about [technology]. I don’t want to become a separated generation, because I also feel responsible for the landscape he is about to emerge into as an adult.”

“…I’m hoping it’s a white-male ghost dance. They realize they’re on the edge of extinction and they’re panicking. We’re witnessing them in their death throes, which is why it’s so aggressive and destructive…” Yeah, I agree? The politics of disgruntled white men has such an edge of panic to it. But in that panic, there’s a very real strain of nihilistic anarchy. As in, those white men feel, deep in their hearts, that if they can’t be in charge then no one should be in charge and that everything should be burned to the ground. It’s scary. As for social media… I don’t know, I’m not going to judge her for how she’s raising her kids (three of whom are teens) and how she’s trying to teach them to consume information responsibly.

44 Responses to “Cate Blanchett: White men in power are ‘on the edge of extinction & they’re panicking’”