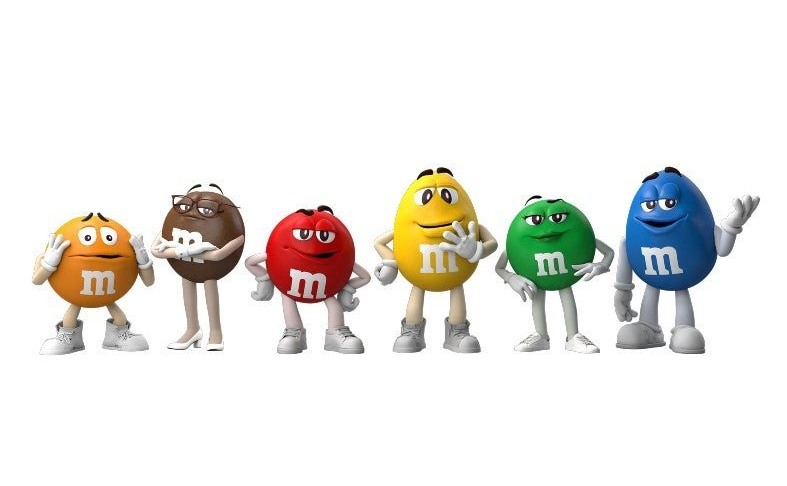 We, as a society, just accepted anthropomorphized M&Ms. We accepted them as icons of the M&M brand (which is such a candy subsidiary of Mars), and we accepted that the green M&M was a sexy bitch and the brown M&M was a lady too, but not as sultry as Green M&M. We accepted that different color M&Ms had their own personalities and unique features and voices. We accepted all of that as if we were placating a child: yes, of course, we promise to remember and care about these corporate cartoons. Now, in a bid for millions of dollars’ worth of free promotion, Mars has announced that they have redesigned and recharacterized the M&Ms. They’re truly making the M&Ms more woke.

M&M’s iconic characters — six different colored “lentils,” each with their own personality — have gotten a modern makeover for a “more dynamic, progressive world,” Mars said Thursday. The redesign is focused on creating a sense of belonging and community, as well as spotlighting the character’s “personalities, rather than their gender.”

The most notable changes include the green M&M’s redesign, which will exchange the white heeled go-go boots she was given in 1997 for “cool, laid-back sneakers to reflect her effortless confidence.” Mars had received criticism for the green M&M’s sexy characterization. The green M&M will also be “better represented to reflect confidence and empowerment, as a strong female, and known for much more than her boots.”

The green M&M and the brown M&M will have a more friendly relationship, showcasing a “force supporting women.” The two characters’ dynamic will have them “together throwing shine and not shade,” the company said. The two characters have sometimes been at odds in advertisements, but they have also been seen as friends — or more than friends in others, like this viral tweet from 2015 showing the two holding hands on a beach. Mars also added that the brown M&M’s heels will be lowered to a professional heel height.

The orange M&M, who has an anxious personality, will “embrace his true self, worries and all.” But the orange M&M’s shoe laces will now be tied to represent his cautious nature. According to Mars, the orange M&M is “one of the most relatable characters with Gen-Z,” which is the “most anxious generation.” The red M&M, who has shown bully tendencies in the past, will be more kind to his co-characters.

Mars will also include imagery of M&Ms of all shapes and sizes, moving away from only one body size, and it will remove the prefixes from the characters’ names in order to focus on “their personalities, rather than their gender.” Currently, only the brown M&M has a prefix — Ms. Brown — on the M&M website. The company hopes their changes will show the importance of “self-expression and power of community.”

WHO was complaining about Green M&M’s sexy boots? Who was like “this M&M is much too sexy, please think of the innocent children”? Who complained about Brown M&M’s heels?? For the love of God. Honestly, I kind of missed that the “lentils” have been characters since the ‘90s? Why did I think it was more recent than that? I always assumed the different shapes were supposed to indicate the different kinds of M&Ms too – one is a peanut M&M, one is a peanut-butter M&M, surely? Anyway, I’ve always felt like they really missed an opportunity to make a Goth M&M.

someone went to journalism school to write this headline https://t.co/42BAr3WWyH

Photo of the ‘new’ M&Ms courtesy of Mars.