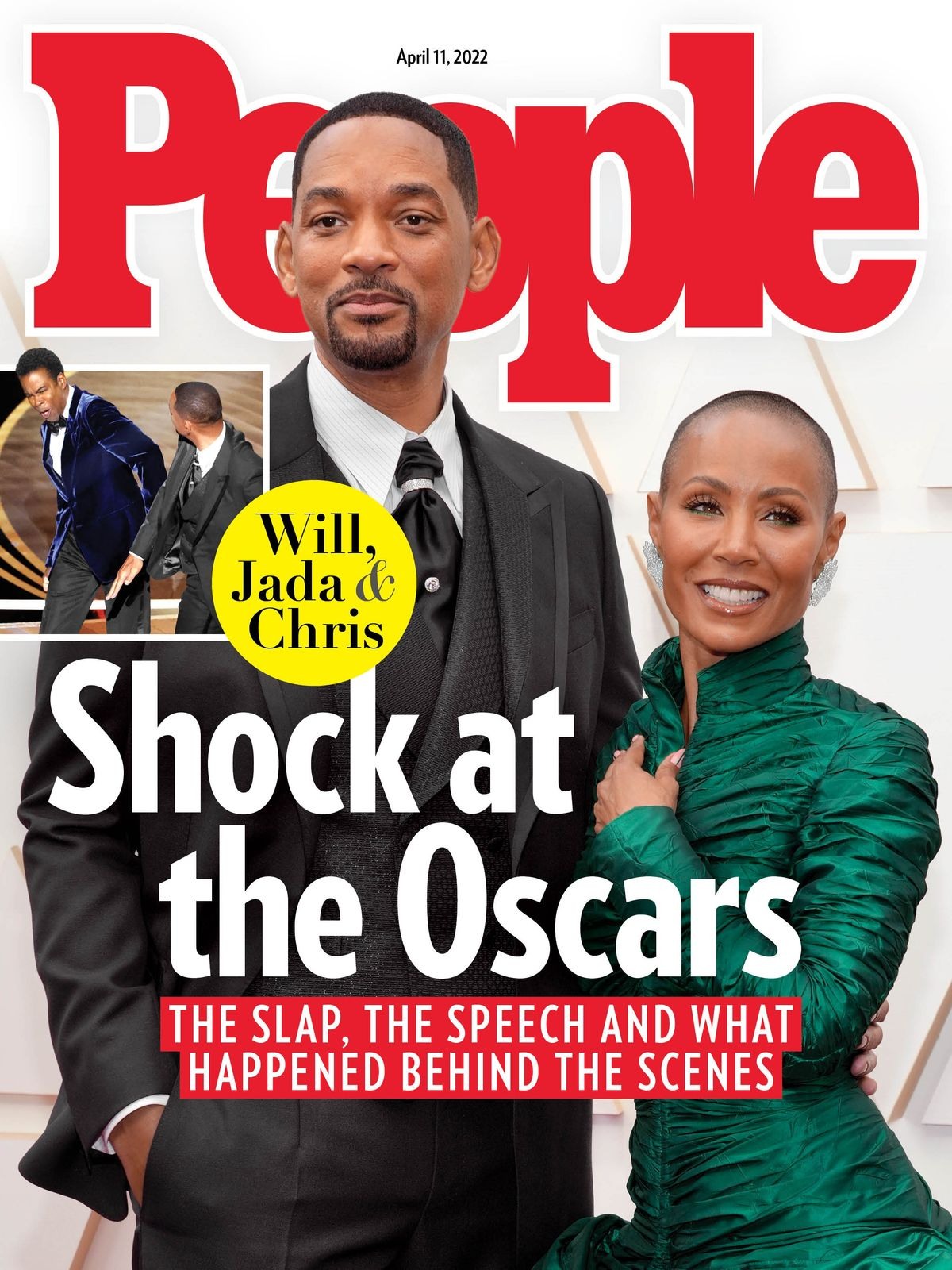 Will Smith, Jada Pinkett Smith, Chris Rock and “the slap” cover this week’s issue of People Magazine. As a gossip blogger, I just have to say this: regardless of anyone’s opinion on Will smacking Chris, that one moment made the Oscars. It made the Oscars one the most-discussed events of the year, and it made the Oscars gossip-worthy in a way they haven’t been in years. It was all incredibly dramatic and everything around The Slap is fascinating too. Like, I’m *obsessed* with hearing all of the stories about what went down during the commercial breaks. I’m obsessed with the fact that Denzel Washington was basically The Chairman, and if not for Denzel’s elder-statesman activities, everything would have turned out differently. If Denzel, Tyler Perry and Bradley Cooper had not immediately gone to Will and pulled him aside and calmed him down, I honestly believe producers probably would have removed Will. Here’s some stuff from People’s cover story:

As those on the scene at the Dolby Theater and millions of viewers at home struggled to make sense of the unprecedented situation, Denzel Washington, Tyler Perry and Bradley Cooper all got up and spoke to Smith, 53, during the next commercial break. “Denzel was really the one to defuse the situation,” an onlooker tells PEOPLE in this week’s cover story.

Backstage, producers, Academy officials and security staff moved quickly to react. “There were a lot of people, and different voices and bifurcated opinions, weighing in on what had just happened and what was the best and quickest course of action,” says a source. “People were also checking that Chris Rock was okay. Basically there were just minutes to first figure out if it was a stunt and then try to get people on the same page.”

While the LAPD confirmed that Rock declined to press charges, physically removing Smith from the auditorium “was definitely discussed seriously,” the source adds. “You can’t plan for something like this and make a split-second decision.”

So why did the actor snap? One insider says Smith has been peeved since Rock hosted the Oscars in 2016 and took a jab at Pinkett Smith, 50, for boycotting the ceremony because of the awards’ lack of diversity. “He made fun of her in his monologue, saying she can’t boycott something she wasn’t invited to,” the source says. According to another source, the two men “have been friendly, but Chris has also been making fun of Jada for years. At first Will used to laugh about it, but it really bothered Jada. Will has privately told Chris before to stop making fun of her, and that’s why this night escalated.” (A rep for Rock denies this.)

Smith also wrote in his recent memoir about grappling with the legacy of his father’s violence toward his mother. “Will is a great guy, but he grew up in a home filled with anger and alcoholism,” says a source. “He has lots of emotional baggage, and certain things set him off. He loves Jada very much through years of ups and downs. No matter what, Will loves and protects his family.”

After the ceremony Smith and Rock went their separate ways. Rock attended Guy Oseary’s afterparty, where he was reportedly consoled by Sykes and Sacha Baron Cohen; Smith briefly attended Vanity Fair’s soiree along with Pinkett Smith and kids Willow, Trey and Jaden (who tweeted “And That’s How We Do It” after his dad’s win).

As for the fallout in Hollywood, insiders think Smith will have to continue to do damage control. “He’s regarded with enormous respect,” says one. “He has worked hard, and he championed this project, which is an extraordinary story, and his portrayal is Oscar-worthy. But this taints everything, and that’s unfortunate. To see that display of behavior on the global stage… That’s what he will be remembered for.”

Again, Denzel’s importance here cannot be understated. Variety’s behind-the-scenes account stressed this too, although in the Variety story, I was definitely left with the impression that Oscar producers didn’t know what the hell to do. Everyone was following Denzel’s lead, and producers were like “well, Denzel has it covered.” Think about how important it was within the room too, to see Denzel pull Will aside and calmly speak to Will. It was a signal to all of the celebrities and industry folks that Denzel still has Will’s back. It was also a signal that Black Hollywood will handle this situation in-house. Also: I totally believe that Will and Chris have had beef before, that this incident didn’t come out of nowhere.

164 Responses to “People: Will Smith had ‘privately’ told Chris Rock to stop making fun of Jada”