Dakota Fanning and Michelle Pfeiffer appeared on The Kelly Clarkson Show to promote The First Lady on Showtime. Michelle plays Betty Ford and Dakota plays her daughter Susan Ford. I hope you all haven’t been dissuaded to try the show by the hype over Viola Davis’ pursed-lipped performance. Honestly, I think it’s my favorite show on TV right now. It’s definitely the one I look forward to the most. Viola’s Michelle may not be what everyone wanted, but what they’re doing with these stories and the cast – especially Michelle and Dakota – is extraordinary.

While on Kelly’s show they got sidetracked by a visiting puppy (who wouldn’t?). The dog’s offstage presence prompted Kelly to ask if either Michelle or Dakota had dogs at home. Dakota told everyone that her pup, Lewellen, had passed away. Lewellen was Dakota’s first dog and she’s still in mourning. To honor her precious pet, she wears a nameplate necklace and has Lewellen’s hair in a locket. Dakota referred to her chest as a “walking shrine” to Lewellen.

Dakota Fanning has a unique way of remembering her late dog, Lewellen.

During an appearance on The Kelly Clarkson Show, the Alienist actress, 28, revealed she wears a gold pendant filled with Lewellen’s fur to always keep her memory close.

“So I have her with me,” Fanning shared with host Kelly Clarkson and fellow guest Michelle Pfeiffer.

Clarkson and Pfeiffer also gushed over a sweet photo of Lewellen shared on Fanning’s Instagram back in 2016. In the shot, Lewellen sits in an armchair, her fluffy white fur tied up into a Whoville-style ponytail on top of her head.

“She was the best,” Fanning recalled.

“People don’t get it!” Clarkson said about the intensity of losing a favorite pet. “I have kids too, and I’m telling you, [the pets] are like a part of my family. When one of my dogs died, I thought I was going to die myself.”

I couldn’t totally make it out but Dakota’s locket looks like the fur is encased in resin. I might like something like that. I have my little dog’s tag on my bulletin board next to me so I can see it while I’m at my desk. I have a photo of my first two cats – my first pets of my own – that sit above me. They’ve been gone for almost two decades and I still feel it. I don’t find the Lewellen locket creepy, but some might. In these cases, I tend to side with the person in mourning, whatever they need to process their grief. I kind of love that Dakota is literally wearing her love for her dog out in the open. I scoured her Instagram to get an idea of when Lewellen left us. The last shot I saw was in 2017. That was with another little black pug who has also appeared once more on Dakota’s IG. So I don’t know if the pug is Dakota’s and if the pug is still with us. It’s darling, whatever its story is.

Dakota and Michelle also discussed how The First Lady marked the 20th anniversary of their first project together, I Am Sam. That was Dakota’s first movie at the age of seven. Both Dakota and Michelle are very good actors, but even so, their chemistry as the Ford ladies is fantastic. Michelle said she’d formed maternal feelings for Dakota and her sister Elle 20 years ago and it shows on this project. She also said she bought Dakota a Barbie Winnebago for her birthday while they were working on I Am Sam. Maybe she’ll get her a puppy when The First Lady wraps?

Here’s the clip. They talk about the locket at the beginning (0:22): 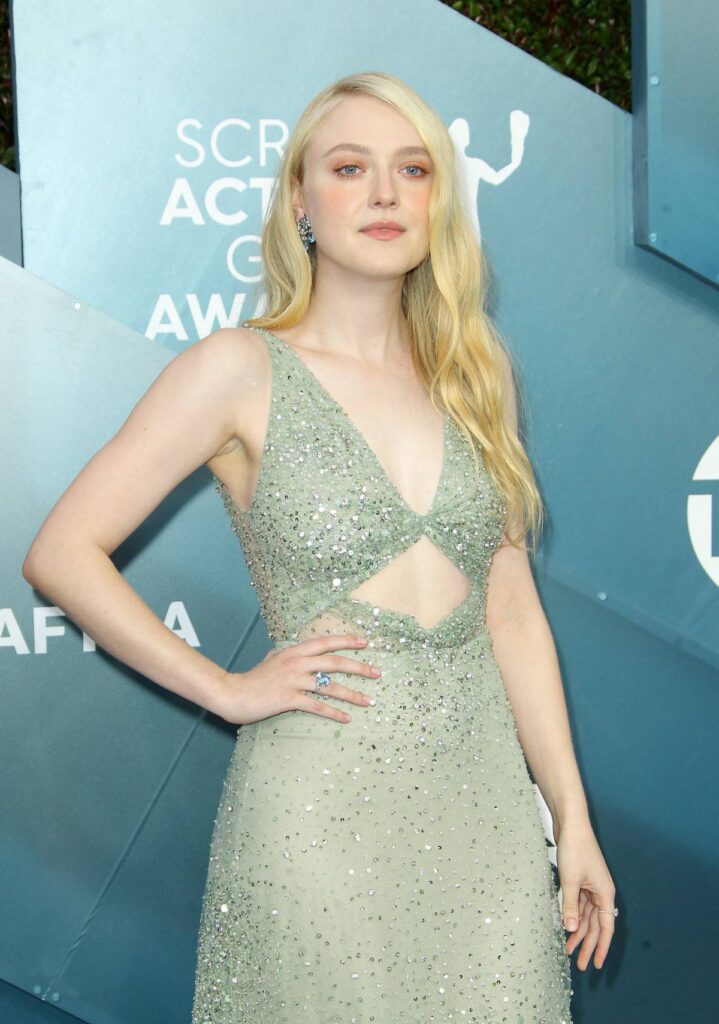