Shay Mitchell: ‘We don’t all have to be pregnant, glowing goddesses’ 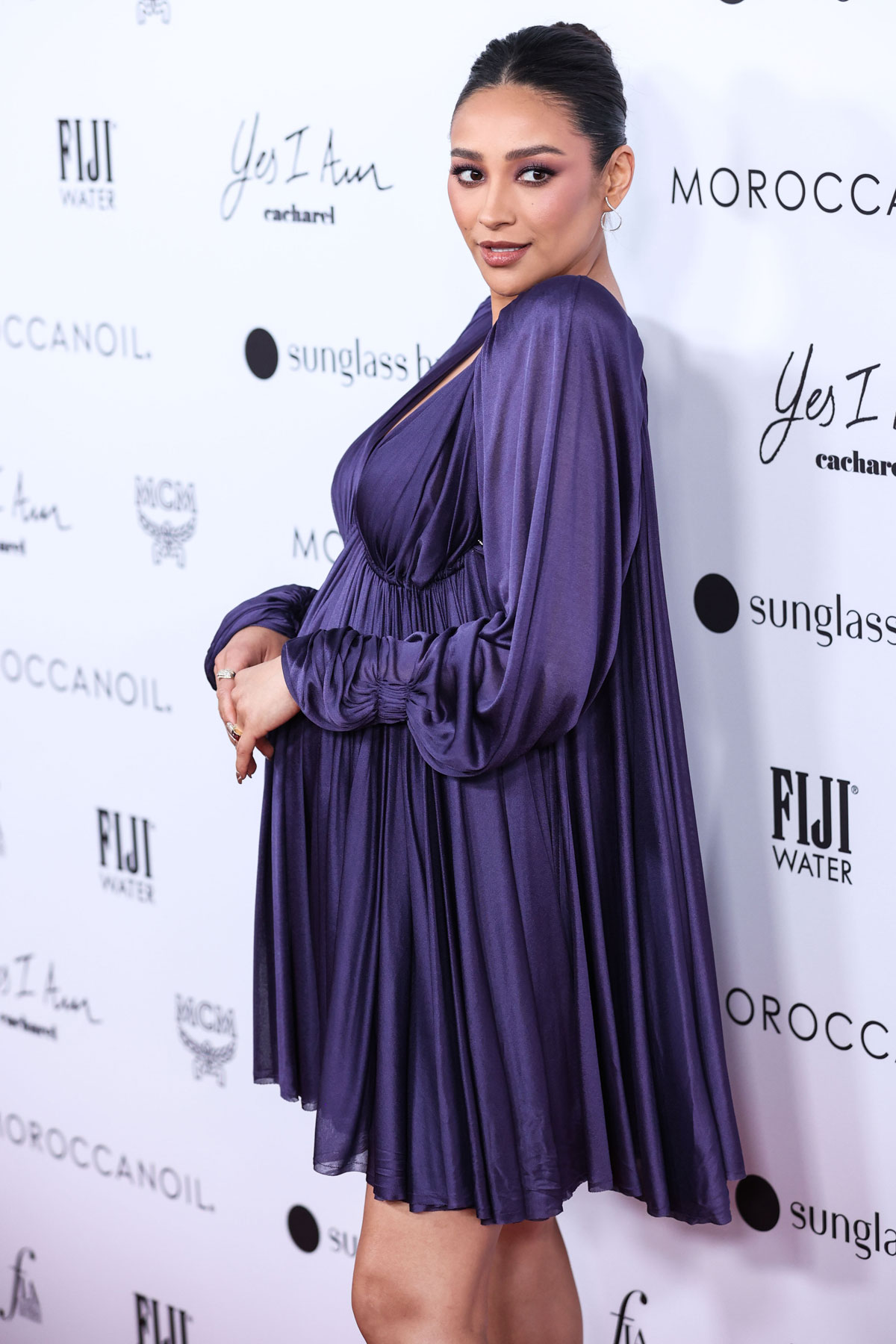 Despite the plot-holes and sheer ridiculousness of it, I loved Pretty Little Liars. Shay Mitchell’s milquetoast character wasn’t my favorite, but she always looked amazing even though they did minimal hair/makeup/styling on her compared to the others. Since then Shay’s had a couple of roles on Netflix’s You and Hulu’s recently-canceled Dollface. She also has a travel gear company Beis, and a new partnership with Hydralyte (it’s exactly what sounds like). She and her long-time partner, Matte Babel, had their first child in 2019 and are expecting another baby soon.

Shay got on Zoom with Buzzfeed for their version of US Weekly’s “25 Things To Know About Me” which is instead “27 Things We Learned Over Zoom,” to talk about a bunch of topics, including pregnancy, motherhood, and passing on cultural heritage to her kids.

Her first pregnancy and mental health
I think the first time around, it was super important for me to talk about prepartum depression. I hadn’t heard much about it, which is why I kind of went on a whole thing speaking about my experience. I wanted people to feel like they weren’t “crazy,” like they weren’t alone if they weren’t feeling like a glorious goddess during their pregnancy. It’s okay to actually not feel amazing. That doesn’t mean that you’re not grateful to be pregnant — I am extremely grateful. But there were also times where I was like, this is sh-tty. And that’s okay! We don’t all have to be pregnant, glowing goddesses the whole entire time.

Being criticized as a mother
Coming across a negative comment or two. I mean, it’s just more annoying. I can take it; I don’t really care. As long as things feel right to me, and I can look at myself in the mirror at the end of the day, I’m good. Everything you do is going to be criticized, and you’ll be criticized 10 times more when you’re a mother. We’ve all got to just do what feels right. We’re all doing the best that we can, and that’s all you can focus on.

Passing on their cultures to their mixed kids
We love to watch different shows that speak about it. I think it’s important for her to see characters that look like her and ones that don’t look like her. I feel like there’s a lot more that’s out there now in terms of content for children, which is awesome. I think also having our families share our traditions with her as well, even just food. … She loves sushi. She loves Ethiopian food. Just exposing her to as many different cultures as possible is super important. Truthfully, you can’t really pinpoint what she looks like or what her ethnicity is — she has bright eyes, a little fairer of a complexion than me or [my partner] Matte, and lighter hair.

Shay’s been very honest about her pregnancy experiences. It’s not her whole brand, but she incorporates into her content. She shared about experiencing a miscarriage years ago and had YouTube videos about preparing for the birth of their first daughter. Her comments seem obvious, but they needed to be said. “Glorious, glowing goddess” is the most common (celeb) portrayal of pregnancy, but there’s a wide range of experiences and feelings aside from the idealized version. And I’d actually never heard of prepartum depression before she mentioned it. It’s good she’s letting criticism roll off her back since moms are judged so harshly and everyone has an opinion. I recall she caught some early flack for attending Drake’s birthday party with Matte a week after the baby was born. (Matte works with Drake in some capacity and they’re all Canadian). But like she said, people have to do what feels right to them and just because you’re a parent doesn’t mean you can’t enjoy other parts of your life.

I liked what she said about passing on culture to her kid(s). Shay is Filipina and white and Matte is Trinidadian and white. From personal experience, I agree with what she says and think it’s important to pass on all parts of a mixed heritage as much as possible. It’s all important for figuring out who you are, feeling like you belong, and understanding where you come from. And it’s especially relevant when the child doesn’t necessarily look like one or both parents. Shay and Matte’s ethnicities are pretty clear from looking at them, but as she says, their daughter’s background is not apparent right now and that could end up being confusing and uncomfortable for her growing up. Fame and wealth can insulate people a lot, but not completely. And even then it’s like, do you want to be in a little bubble or aware of other cultures and perspectives? And it sounds like Shay is doing the latter with her approach.

P.S. Shay is actually a portmanteau for Shannon Ashley. She’s so funny in her videos.

8 Responses to “Shay Mitchell: ‘We don’t all have to be pregnant, glowing goddesses’”