My husband and I went to Top Gun: Maverick over the weekend. I won’t put any spoilers in the post, I promise. I did love it, though. They thought a lot more about the story than I assumed they would. This is a what I told my friends who asked: what happened in Maverick wouldn’t have happened in real life, but it all would have happened as an extension of what they set up in the first film. And, I have to walk back what I said about not including Meg Ryan’s character in Maverick, it was actually important, not a slight.

Overall, it’s a fun, bonehead summer flick. But like the first film, there’s some tension because it deals with missions, combat and life-threatening situations. So I’d like to see it again now that I know how everything turns out, I can unplug my ears and get out of the fetal position. Which is good, because I always like to support struggling filmmakers. Oh wait, that’s right – this movie has made $550M so far. And it’s Tom Cruise’s best film opening to date.

The Tom Cruise-fronted sequel to 1986’s Top Gun raked in another $86 million at the domestic box office this past weekend, adding to its already record-breaking run since it hit theaters May 27.

So far, in the 10 days the film has been in theaters, Maverick has grossed over $291 million at the domestic box office and $257 million internationally, for a global total of $548.6 million.

The newest stats come after the action flick earned an estimated $124 million at the domestic box office in its first three days, becoming Cruise’s biggest opening weekend yet, according to Variety. It was also the movie star’s first film to debut to more than $100 million.

It’s not a huge surprise, I grant you. Tom and Jerry Bruckheimer know how to promote a movie. And this movie had so much hype from the 36-year gap between films to the repeated delays in getting in theaters. It was self-perpetuating hype. The question is, did it deliver? Most reviews say yes. My Twitter page said yes. I say yes. It’s not Shakespeare, but it is a fun romp. They give just enough backstory that you don’t have to watch the first movie. And they walk a fine line between nostalgia and a different story. There were a few times I worried they were just going to rehash a favorite from TG, but they put a spin on it that made it interesting enough. Again, I don’t want to put spoilers but I agree with much of Variety’s review, which does have spoilers.

As I said above, I didn’t think much of what happens in Maverick would happen in real life. There are some fun articles with real pilots dissecting the movie. The military stuff they got wrong, they mostly did so for a reason, be it story or classified information. What I find funny is that most of the pilots say the call signs are far cooler in the movies than real life. Almost all of them mention it. It’s true. My grandfather was a well-respected Naval aviator and his call sign was Squinch. 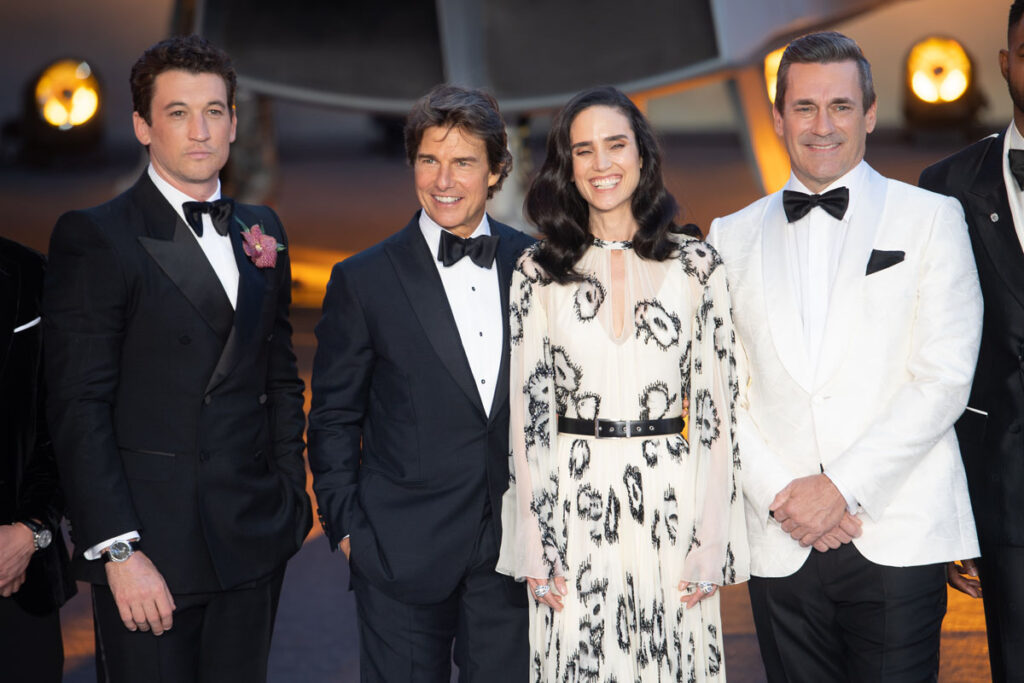 Tom Cruise and Jennifer Connelly attend the Royal Film Performance and UK Premiere of “Top Gun: Maverick” at The Odeon Luxe, 24-26 Leicester Square, London WC2H 7JY on Thursday 19th May 2022. The Premiere is being hosted by Paramount Pictures and The Film and TV Charity and will be the 72nd Royal Film Performance delivered by the charity in its almost 100-year history. The charity is an organisation that supports hundreds of thousands of people working behind the scenes in the UK’s film and television industry. Their Royal Highnesses the Duke and Duchess of Cambridge will be in attendance.,Image: 693052735, License: Rights-managed, Restrictions: Rights Managed, Model Release: no, Credit line: Sue Andrews / Avalon

33 Responses to “Top Gun: Maverick has made almost $550 million globally”