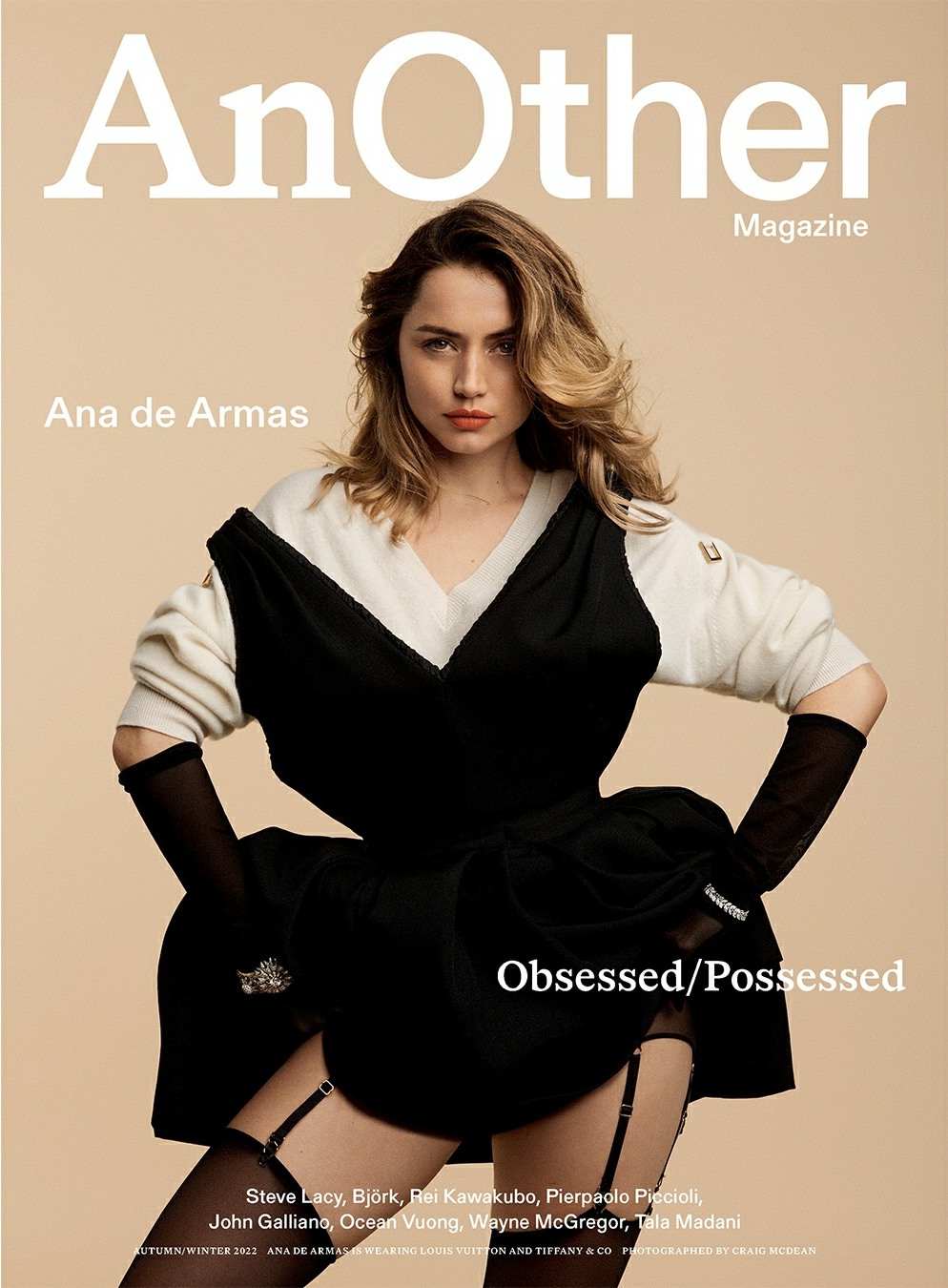 Ana de Armas covers AnOther Magazine to promote Blonde, for which she wants an Oscar nomination. No, scratch that – I think Ana is being told to promote the hell out of Blonde because an Oscar nom might be on the table, but that doesn’t mean that she’s actually trying to get nominated. I think she’s fine with whatever happens – it’s clear that she fell deeply in love with Marilyn Monroe and MM’s iconography, beauty, tragedy and trauma. She’s promoting this so hard because she’s actually proud of her performance and the film, however exploitative, stupid, offensive and ridiculous. You can read the full piece here (it’s super-long). Some highlights:

The cast & crew signed a card and left it at Marilyn’s crypt: “We got this big card and everyone in the crew wrote a message to her. Then we went to the cemetery and put it on her grave. We were asking for permission in a way. Everyone felt a huge responsibility, and we were very aware of the side of the story we were going to tell – the story of Norma Jeane, the person behind this character, Marilyn Monroe. Who was she really?”

Norma Jeane vs. Marilyn: “The more famous Marilyn became, the more invisible Norma Jeane became – Norma was this person no one ever actually met. And Marilyn was someone even she herself talked about in the third person. In some ways Marilyn saved her, gave her a life, but at the same time she became her prison.”

Cuban dreams: “I grew up watching everything from Titanic to The Terminator, but I always knew that reality was so far from my reality. Kids in the US, they believe they can be princesses because you can buy a princess dress and a princess crown and become one. I never had that. I didn’t even know what an apple tasted like.”

Trying to do Marilyn’s voice: “It just wasn’t working when I tried to imitate the sound or the pitch. Marilyn’s voice, her expressions, were a consequence of the speech classes she took herself, of her insecurities, of her not having any boundaries and letting people in, of playing this part of having to be rescued all the time. So I had to know what she was thinking and feeling every time. Because the way she rounded her lips for the ‘O’s, or how much of her lower teeth she would show, what her eyebrows were doing, all these expressions were a consequence of Marilyn in survival mode. They were tricks that she was pulling in desperate circumstances.”

Marilyn couldn’t afford to be angry: “In some early scenes I played it way too strong. I got defensive and angry and Andrew said, ‘You’re not allowed to get angry. Ever. Anger is not something Norma can afford.’ Well, can you imagine what that does to a person? At its heart the movie is about her looking for an absent father. Part of the reason I think she became Marilyn Monroe was to be so visible there’s no way he could not find her. You see how a childhood of feeling unloved and unwanted led her to need love, attention, need someone with her always. So I thought, OK, if I can’t get angry, what are my options? How else can I survive? And I started to explore all these other feelings.”

The violence against Marilyn: “We tried to show the fight she had to put up, not just to be successful, but to survive. What she went through was dark. So dark. When you know that, f–k, I love her more. So the whole point is not bringing down the myth, the point is humanising this icon and making her real, a real woman going through all these different kinds of abuses and situations. And as a woman today I can easily understand how you could find yourself in that situation. So, yes, there are scenes that are hard to watch. But I don’t think this movie has anything sensational or exploitative or gratuitous in it. In many of the scenes people are talking about, you don’t actually see anything. You just know what is happening and that it’s coming from a place of zero love. I do think the audience will feel uncomfortable – because she is uncomfortable. When she feels dirty, you feel that the scene is dirty. It’s all in the way it makes you feel.”

Filming in the home in which Marilyn died: “Those final scenes at her house – I know she was there with us. We all felt it. And I think you can feel that in the movie.”

One of the interesting things I learned from this profile is that Ana not only reread Joyce Carol Oates’ Blonde several times, but Ana also sought out other Monroe material, including Truman Capote’s excellent essay, “A Beautiful Child.” Capote gave Marilyn more depth, agency, humor and sweetness in one essay than Oates did in an entire book, doubly so for the movie. “I don’t think this movie has anything sensational or exploitative or gratuitous in it…” That’s a damn lie. The book is exploitative as hell, and there’s a reason why the film got an NC-17 rating, even with months of edits. It IS a very specific kind of torture-p0rn and I hate that Oates’ book was the only real source material.

Cover and IG courtesy of AnOther.