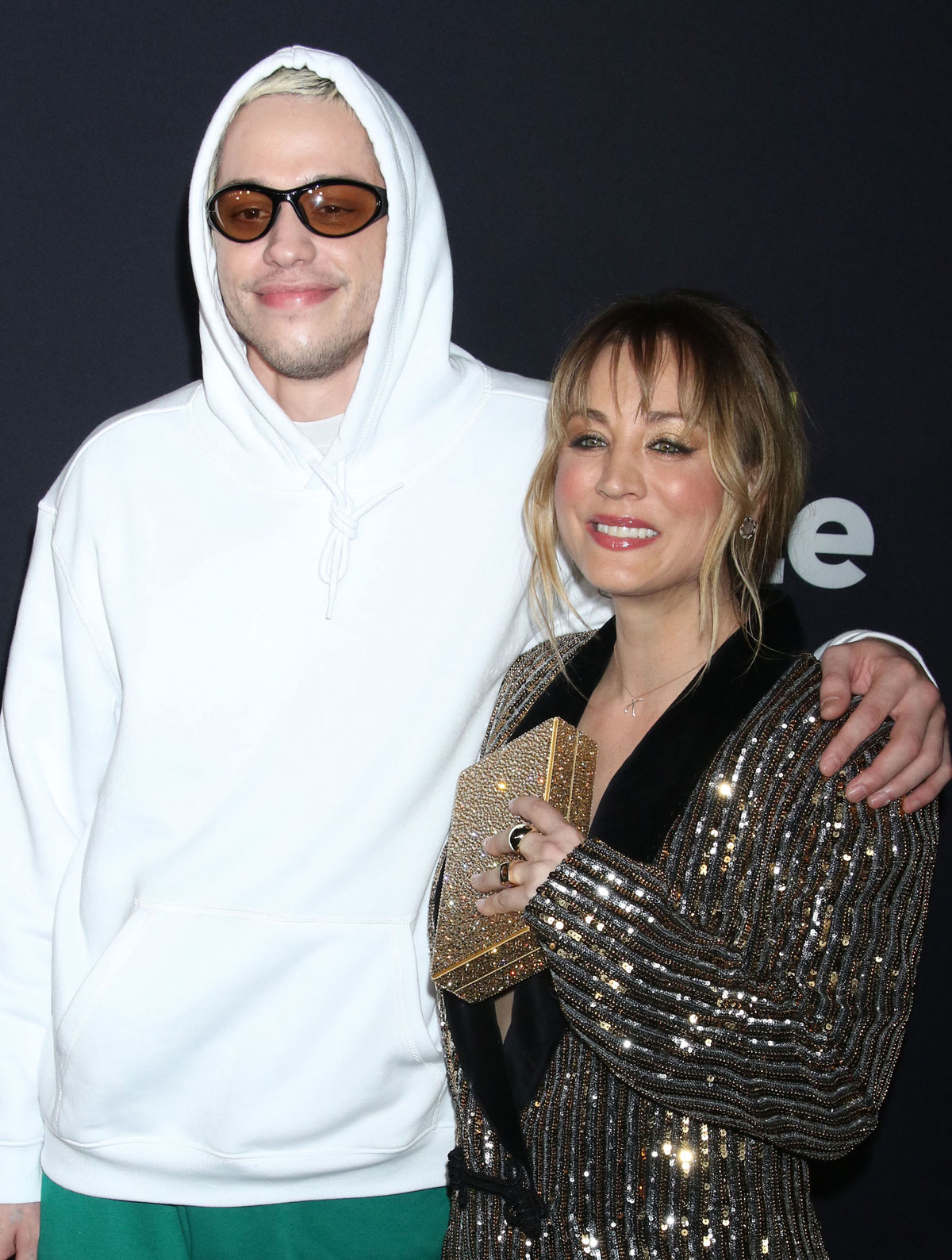 Last summer, Kaley Cuoco and Pete Davidson filmed a movie called Meet Cute, which premiered on Peacock yesterday. There were quite a few pap photos of them filming together in New York and Kaley split from her husband around the same time, so there was idle speculation Kaley and Pete would date in real life too, but that never materialized. So I guess they’re just friendly costars who gently roast each other? The two of them attended a premiere earlier this week and while Kaley looked cocktail cute in a sparkly dress, Pete looked like he rolled off his couch in a hoodie and sweatpants.

Kaley Cuoco and Pete Davidson had two very different fashion looks as they headed to their movie premiere.

Ahead of their new film together — Meet Cute, which debuts on Peacock Wednesday — the pair stepped out on Tuesday night in New York City.

Cuoco, 36, looked radiant in a metallic blazer dress and black strappy heels, which she accessorized with a gold sequin clutch.

Davidson, meanwhile, went with a much more casual look for the 28-year-old’s first public appearance since his split from Kim Kardashian last month.

“I’m glad Pete dressed up for the occasion. That is so bad,” Cuoco jokingly told Entertainment Tonight. She then looked over at her costar and repeated the comment to him.

“I’m really glad you dressed up tonight,” The Flight Attendant star said, as he looked over his outfit with a smile before continuing to pose for photographers.

In Meet Cute, Cuoco plays Sheila, who uses a time-traveling machine to relive her love-at-first-sight dates with Gary, played by Davidson. Sheila, though, wants their nights to be even more perfect in her eyes, traveling again and again to Gary’s past to try to change him into her ideal man.

So is Pete so depressed about breaking up with Kim that he only wears sweats now? Just kidding! Kaley joked to reporters and to Pete himself about his outfit. I couldn’t find a video to hear her tone, but in my mind it was a little pointed because it really is “so bad!” It’s annoying that Kaley is all dolled up and he’s out there looking like a schlub. Some of the coverage described Pete as wearing a hoodie and green pants, but that’s giving the latter too much credit because those are definitely sweats, elastic ankles and all. They’re not even nice or matching sweats either. Would it have killed him to throw on a button down and jeans? It’s just a premiere for a streaming movie, but a little effort from him to match his co-lead would have been nice. I feel like men get away with this often and it’s annoying.

The movie looks kind of funny and I’ll check it out this weekend. There’s one scene in the trailer where they’re talking in Panna or Panna II about the time travel and he smiles and nods and that was the first time I saw his appeal. But there are some beats in the trailer where I can’t tell if it’s supposed to be a rom-com or a thriller. Probably a rom-com, but a thriller would be interesting and did anyone else get that vibe from the music and that quick-cut montage? Also, I kind of call BS on the names Gary and Sheila for two millennials. I’ve never met a Sheila my age. But otherwise, the movie looks good! 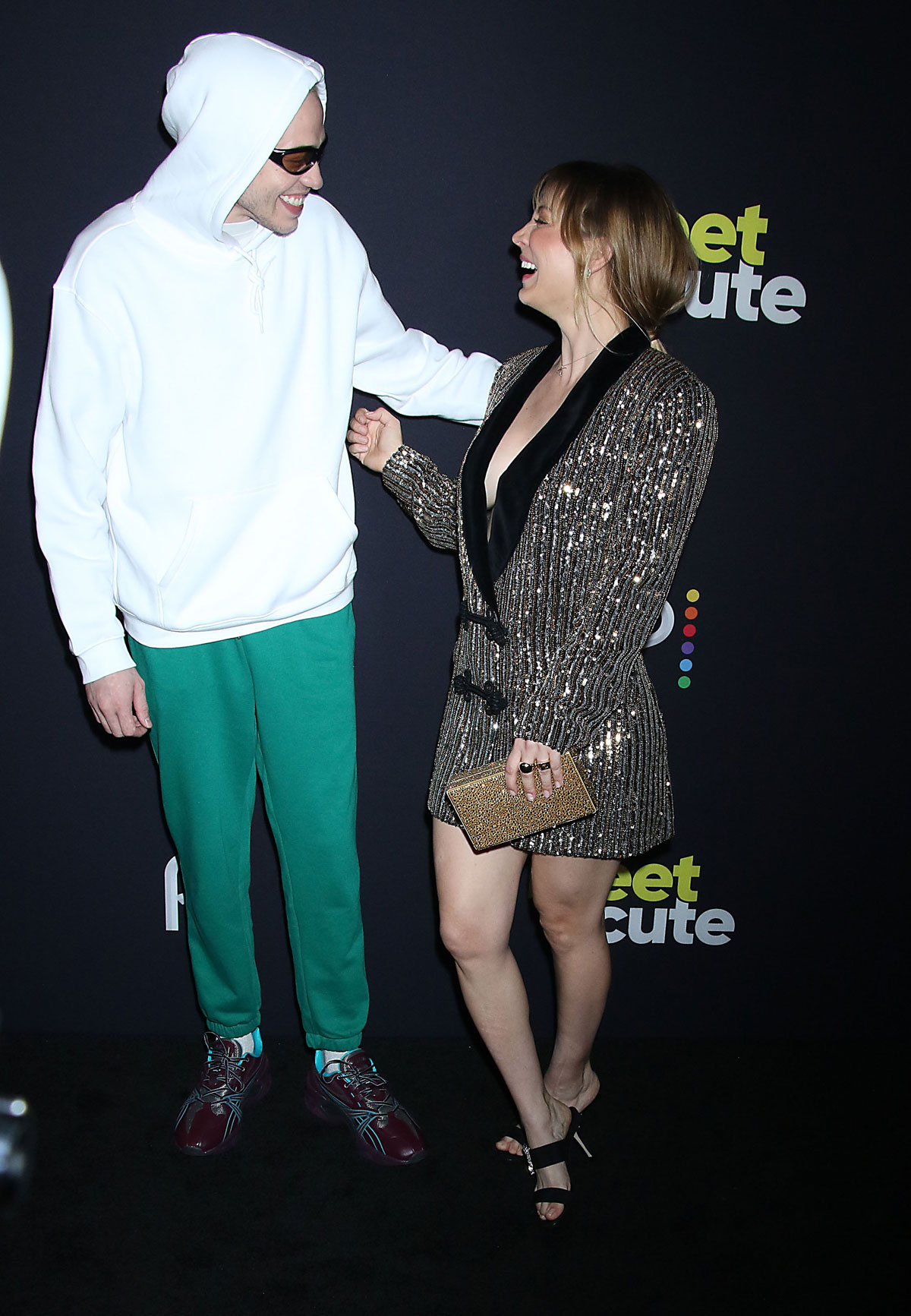