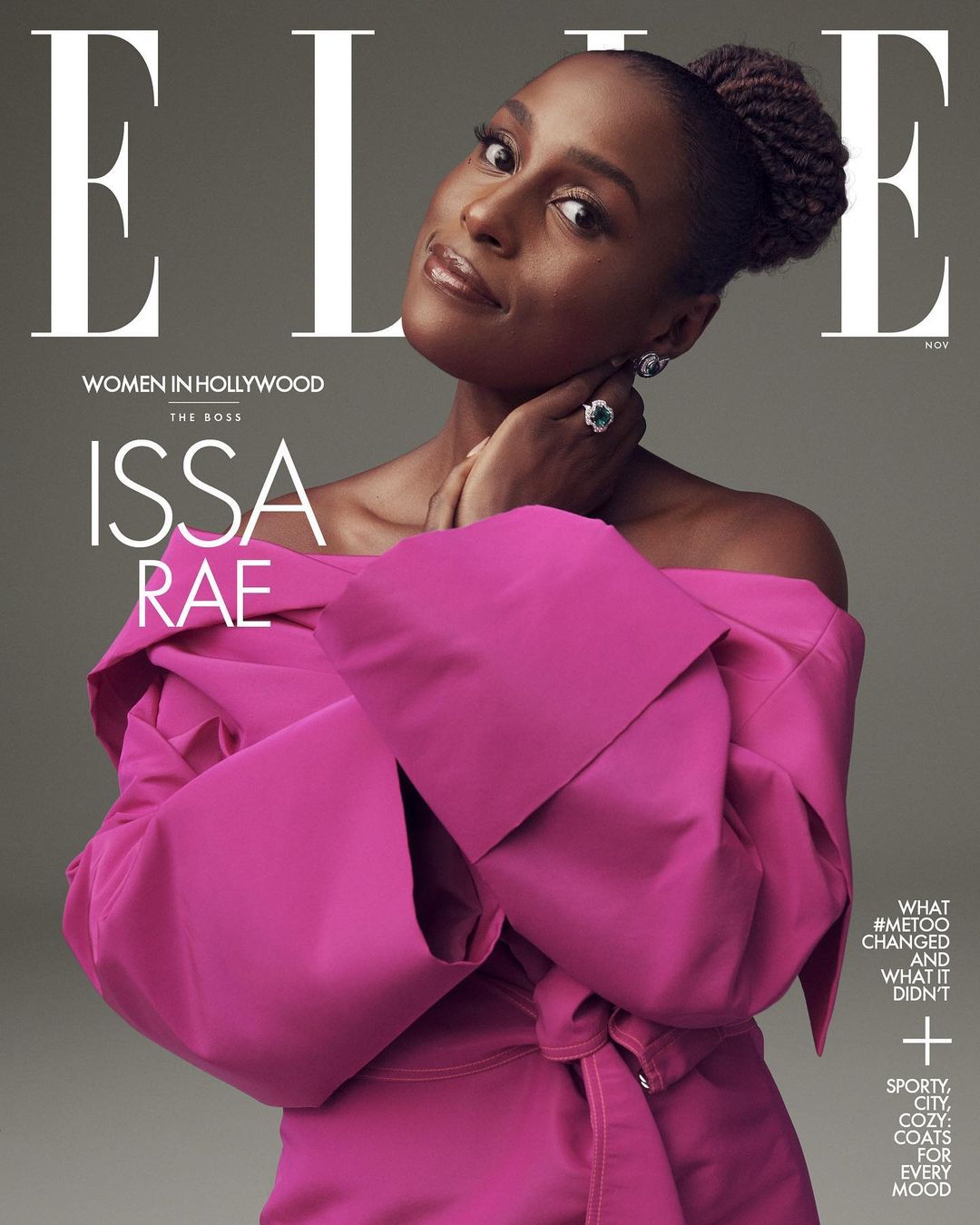 Issa Rae is one of Elle Magazine’s Women In Hollywood honorees, and one of their WIH cover stars. Issa is so photogenic, it’s crazy. I love seeing her on a red carpet – she always pops and the camera finds her – but in editorials, she always looks amazing too. Issa is currently dealing with the “what’s next” of her professional career. Insecure ended in less than a year ago, and she got to end it on her terms. While she immediately jumped into producing and creating new shows, she’s also giving herself time to put together her next big moves as a writer, producer and actress. I do think of her like I think of Mindy Kaling – she can do it all, she has a unique ability to create “content” at every level. Some highlights from Issa’s Elle interview:

Waking up before 4 am every day: Being an early riser, she says, is her self-care. “Those couple of hours are the only time that is just mine.”

Her ultimate goal is owning a studio in South L.A. “That has been in the works for quite some time, so that would be like, ‘Okay, I’ve done what I set out to do.’” But while she works toward that day, her career has already far exceeded her wildest dreams. “[As a kid], I knew I wanted to write, but I definitely did not have a vision of what I’m doing now. I just didn’t know what was possible.”

Being a boss: “I was just talking about how much I hate it the other day. [laughs] I love the work, but leading [a company] is a completely different beast. It’s a full-time job. I realize that I can only do the full-time job when I’m not creating, which is kind of a nonstarter for me. So trying to find that balance and make sure that these brilliant people that I’ve hired have vision and direction is my main priority, but it requires a different part of my brain to run.”

What has changed for women in Hollywood post-#MeToo: “Sadly, not much. It feels like we’re regressing, depressingly so. There are just too many enablers for there to be real change. People have to be held accountable. There have to be legitimate consequences. Hollywood is very bad about consequences. It’s literally the worst industry when it comes to punishing people for misdeeds and actions, because money will always reign supreme. That’s something that, even by working in this industry, we’re enabling. So it’s hard. What I have realized is that I can control my own environment and who I work with. I can hold people accountable within my world and my bubble. I don’t have to work for everybody. All money isn’t good money. All people aren’t good people.”

On what more needs to be done: “It starts with a backbone. While I don’t support people jumping to immediate conclusions and I think it’s entirely fair for investigations to happen, I think it’s extremely important to, like the mantra says, ‘Listen to women.’ I’m gonna be real, the stuff that’s happening with Ezra Miller is, to me, a microcosm of Hollywood. There’s this person who’s a repeat offender, who’s been behaving atrociously, and as opposed to shutting them down and shutting the production down, there’s an effort to save the movie and them. That is a clear example of the lengths that Hollywood will go to to save itself and to protect offenders. So, don’t do that, and women may be able to thrive. They won’t have to live in fear of keeping silent because it’ll ruin their careers. It’s just a constant pattern of abuse that’ll only persist if Hollywood continues to insist on being this way.”

On being a role model: “I don’t feel any responsibility. I’m like, ‘If you look up to me, proceed with caution. That’s on you. I’m sorry, while also flattered. But good luck to you if you do.’ I’m very transparent about my mistakes. I’m very transparent about my journey. But I don’t have to watch myself or what I do. If I had a legion of 12-year-old girl fans, I would be more cautious, but I don’t think that’s the case.”

On her only-in-Hollywood moment: “I was at the Golden Globes sitting at a table with the cast of Big Little Lies. Laura Dern was having a conversation with the president of HBO and was casually, unbeknownst to me, pitching him her next idea. It was him being like, ‘Okay, I love the idea. Who’s gonna write it?,’ then her pointing to me, and then us selling a show together. That, to me, will always be an only-in-Hollywood moment. Now we just have to make the show.”

I cannot believe my nemesis Laura Dern tried to pitch a show with Issa Rae without Issa even knowing! Typical nemesis behavior. I especially like what Issa says about how she doesn’t feel any obligation to be a role model, which is how it should be, although she IS a role model to a lot of girls and women. I’m also enjoying her callout of business-as-usual around Ezra Miller. Maybe I’m not paying close enough attention, but the Ezra Miller situation is especially bonkers because – in my mind – Ezra Miller is not even A-list talent? They’re literally trying to save this terrible person’s career when Miller is utterly replaceable and forgettable as an “actor.” It’s not like Miller is Tom Cruise or something, you know? 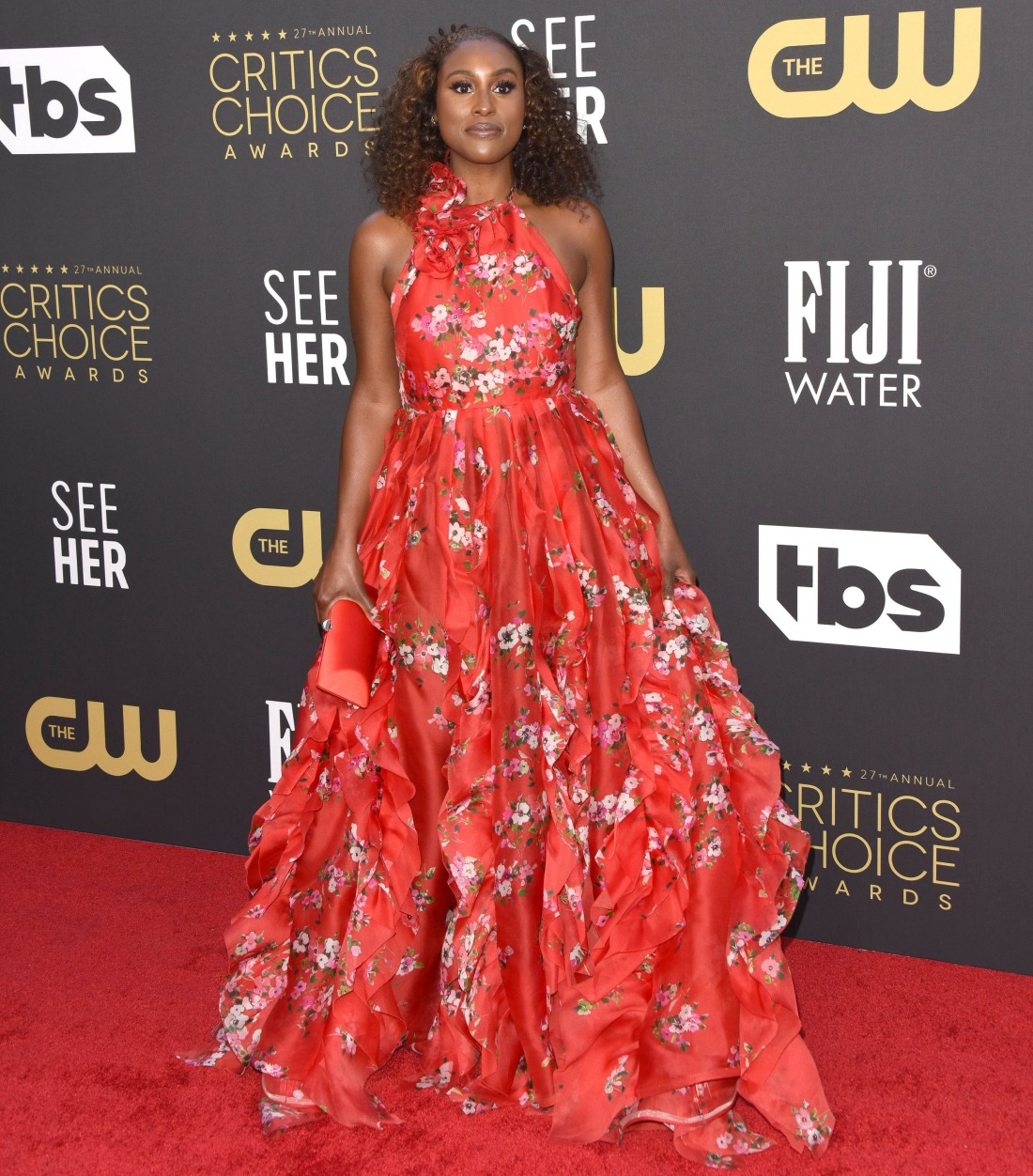