When a fresh-faced girl starts to make it big in Hollywood, a certain level of change is expected. Actresses often start learning new makeup and hair tricks after spending a great deal of time in the prep chair before shoots. They also tend to drop weight as well, whether the loss is intentional or due to stress and other factors. I think at the beginning, weight loss had a lot to do with Megan Fox’s transforming (har har) look, but it was about 2010 (more specifically, the Jonah Hex red-carpet photo shown above) when I realized that something was truly amiss. As in, this girl is addicted to cosmetic enhancement, which is a terrible shame because she was so naturally beautiful from the very beginning. Of course, most females can relate to aesthetic insecurities, so it’s not like I can blame Megan for being overly concerned with her physical appearance — especially in the pressure cooker that is Hollywood.

Yet it’s hard to ignore the visual evidence from Megan’s most recent red carpet appearance, which saw Megan promoting a low-key role in Friends with Kids with an even more tweaked up appearance than when she was promoting blockbusters. Even though she should be focused on improving her public image (and arguably, her acting abilities as well), she can’t seem to stop altering her appearance. Instead of making herself more desirable, Megan just looks exhausted and (paradoxically) older than her 25 years. Just for reference’s sake, this is Megan’s “starting point” in 2004 before her first nose job (CB thinks she may have had a total of three nose jobs by now): Now a story in this week’s In Touch claims that Megan has really shelled out for elective enhancement since she began her career. According to their expert, Megan has indulged in an eye lift and Botox; a nose with a narrower bridge and more sculpted tip; cheek implants and/or fillers; plumped-up lips ($1200) and mole removal; and either laser skin resurfacing or chemical peels (maybe both). Who knows if this is all true. At least some of it is, and it’s impossible to dance around the topic in a delicate manner when In Touch concludes that Megan has spent $60,000 on plastic surgery:

Men think she’s a sexpot, but Megan Fox will never look good in her own eyes.

Botox, eyelid surgery, a nose job, cheek fillers, laser skin resurfacing and lip injections are just a few examples of the dramatic measures an expert believes Megan Fox has taken to alter her apearance. “I’m insecure,” the Friends With Kids actress recently admitted. “I [hardly ever] look at myself, even in still photographs.”

Even though her rep denies she’s had work done, a friend of the star tells In Touch that ever since Transformers director Michael Bay replaced her in the franchise, she’s become even more obsessed with her looks and has taken her quest for perfection to extremes.

“She was terrified that losing Transformers was bad for her career, so she decided to transform herself into what she believed to be beautiful,” the friend reveals. “Now she looks like an entirely different person.”

Plastic surgeon Dr. Robert Guida estimates Megan, 25, had up to $60,000 worth of work done, and as as result, looks much older.

Despite some of her closest friends begging Megan to stop messing with her face, the star seems trapped in a vicious cycle. “She can’t seem to pass a mirror without scrutinizing her appearance,” says her friend. “She’s always looking for ways to enhance her looks.” Clearly, she doesn’t believe in the phrase, “if it ain’t broke, don’t fix it.”

Obviously, Megan’s had a bunch of stuff done, but has she really spent $60,000? I question whether she can afford to do so. Yes, she got paid $800,000 for Transformers and $5 million for Jennifer’s Body, but then you have to account for taxes, agents, publicists, and the like. She also bought a nearly $3 million home right before her Hollywood value crashed mercilessly into the ground. Still, Megan also made some money doing endorsements like Armani, so it’s not like she’s broke.

Here’s a rather lengthy photo comparison that shows the evolution (devolution?) of Megan’s face over the years. Once you stack the photos up next to each other, the differences are stunning. 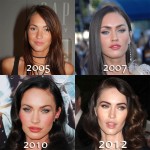