Kim Kardashian in leather jodhpurs in Miami (for real): the worst style idea ever? Filming has begun as Kourtney & Kim Take Miami -– but this time they won’t be living anywhere near glamorous South Beach!

According to Belle Isle Blog, the Kardashian’s hopes of renting a beach home on the Sunset Islands, DiLidi Island and on North Bay Road were blocked by irate neighbors who didn’t want the hassle of having the reality-TV stars on their doorstep.

The family needed signatures from immediate neighbors of the prospective homes they wanted to use for a three-month period of non-stop filming – and a support of 90 percent of homeowners within 500 feet. However, most residents kicked up a stink – complaining that the film crews and paparazzi would prove a disruption to their normally tranquil neighborhoods. It has meant that Kourtney, Kim and Khloe – who has been filming with her older sisters – have had to settle for a base nearly 14 miles away from trendy South Beach in gloomy North Miami Beach.

“They found a gated community in North Miami Beach,” Raul Gonzalez of Miami Beach’s Office of Film and Print confirmed.

But despite their abode being in a desirable gated community, RadarOnline.com has learned the area the 51,000 square-feet property is far from safe.

“The area is known for its hourly hotels, strip clubs and high crime rate,” a source revealed. “It’s a far-cry from their usual posh digs, with just a 7-Eleven and an abandoned old bank close by.”

On Wednesday, filming for Kourtney & Kim Take Miami got underway – with the two protagonists taking the eldest sister’s kids, Mason and Penelope to the Wizard of Oz interactive exhibit at the Miami Children’s museum. The new season is set to premiere in January 2013.

“The area is known for its hourly hotels, strip clubs and high crime rate.” Then they should feel at home. Those are their people. Let’s not pretend that they’re pretty princesses who can only live in the best accommodations ever. I think it’s actually kind of awesome that they were trying to get into a fancy neighborhood and all of the people in that neighborhood were like “HELL TO THE NO.” Usually, the neighbors would just have to eat it, you know? It’s nice that the Kardashians didn’t get their way at least once.

You guys… prepare yourselves. I’m including some photos of Kim over the weekend in Miami, and she was wearing two different pairs of leather pants. One pair is like a tight, skinny-cut pair which is unflattering and awful in its own special way, but at least Kim is thoughtfully wearing a tunic which does make it slightly less awful. But the other outfit… two words: leather jophpurs. FOR REAL. Is she, like, riding horses now? Even if she was, do people wear LEATHER JODHPURS on a horse?! These pants make her look bottom-half look like she took part (voluntarily) in some kind of extreme thigh transplant. 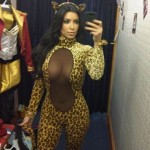 116 Responses to “Kim Kardashian in leather jodhpurs in Miami (for real): the worst style idea ever?”