Does Kim Kardashian have another sex tape & is it being sold for $30 million? Here are some photos of Kim and Kourtney Kardashian (and Jonathan Cheban) in Miami on Monday. I didn’t get around to posting these pics yesterday because I really didn’t have much to say about them – I mean, I actually think Kim looks pretty good here. She’s not wearing leather jodhpurs or anything horrible like that. This skirt-and-blouse combo is something I would totally wear. I’m not totally in love with the boots, but I don’t hate them either. Oh, and I don’t know what in the prairie hell Kourtney is wearing – WTF?!

Anyway, in gross Kardashian news of the day, there’s a story circulating that Kim is the star of yet another sex tape. This one is old – so old that it probably features some of Kim’s original face, and Kim’s alleged partner is Ray J, yet again. Apparently, someone is trying to sell this second sex tape for a whopping $30 million. For real? For $30 million, I would probably have on-camera sex with Ray J. Or Kim.

Kim Kardashian rose to fame on the back of a sex tape she made with the hip hop star Ray J, parlaying her infamy into a reality show, product endorsements, and other ventures that have netted her and her family millions of dollars, as well as scores of tabloid covers.

Now it looks like she may be returning to her sex tape roots.

The Daily Star reports that another video of Kardashian and Ray J is on the market for 19 million pounds — that’s over $30 million.

“It’s definitely Kim in the video,” a source told the paper. “And it’s even raunchier than her last one. There are all kinds of eye-popping moments.”

Kardashian is also dating rapper Kanye West, and the Star says she is worried another sex tape could jeopardize their relationship.

I wouldn’t put it past Ray J, Kim or Kris Jenner to find a sex tape and immediately try to sell it to the highest bidder. Who do you think it was? Probably Ray J… but Kris Jenner will ensure that Kim gets her “cut” of the profits, I’m sure. That is, if this is true. I don’t doubt that there are more Kim Kardashian sex tapes out there, I just don’t know if someone is currently trying to sell one of them.

And to cleanse your mind of all of that evil, here are some photos of Mercy Kardashian-West. This poor kitty. I want Mercy to come and live with me. 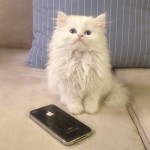 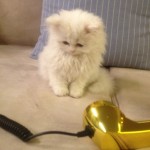 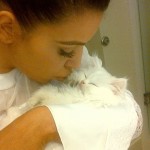 63 Responses to “Does Kim Kardashian have another sex tape & is it being sold for $30 million?”