Taylor Swift was a platinum-selling pegacorn for Halloween: adorable & dorky? Taylor Swift was a “pegacorn” for Halloween. No, it’s not a sex thing (but it sounds like it, right?). Swifty is a Pegasus + unicorn = pegacorn. She wanted to be a unicorn with wings. It’s sort of cute. I’m glad she didn’t go for a Sexy Maid/Nurse/Whatever. I’d much rather see women dressed up as pegacorns rather than sexy whatevers.

Anyway, Taylor had a really amazing week. Her album, 1989, dropped and it became the first and only platinum-album debut of the year. This is actually a two-fer: the last time an artist went platinum in their first week was 2012, when Taylor released Red. Taylor’s label, Republic Records, threw her a “private party” in Soho last Thursday to celebrate. There were gormet white truffle burgers and a cake shaped like a Polaroid camera.

Vulture also had a great analysis on Taylor Swift’s earnings, real estate, album sales and tour grosses – go here to read. By their analysis, Swifty is probably sitting on just shy of $200 million after taxes. My guess? It’s probably a lot more than that. Taylor tops nearly every list of the top-grossing tours, albums, etc. Anyway… it’s good to be Tay-Tay. It’s profitable to be twee.

Last thing – Taylor was on Ryan Seacrest’s radio show and she danced and lip-sync’d to Iggy Azalea. It was brilliantly awkward, hilariously dorky and everything in between. This is the kind of thing where I go… “Okay, maybe she might be sort of fun as a friend.” 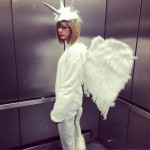 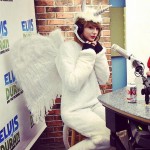 84 Responses to “Taylor Swift was a platinum-selling pegacorn for Halloween: adorable & dorky?”