Sad news, ladies. Joseph Gordon-Levitt, noted feminist, secretly married his robot-building girlfriend, Tasha McCauley. It’s gonna be okay. Joe does have his share of female fans, but he flies under the radar. Part of his low-key nature evolved because he wanted so desperately to avoid the child-stardom trap. He’s chill. He dates women who aren’t famous, and he’s been “off the market” for some time, really.

JGL raved about his (then-nameless) lady last spring. She’s refreshingly normal! Tasha holds an MBA and is the CEO of Fellow Robots. She barely maintains a social media presence. People has a photo of Joe and Tasha together, and here’s the official, barely-there wedding announcement. These two are so publicity shy that they got married over a week ago, and we’re only hearing about it now:

The pair said “I do” during a ceremony at their home.

“I have a girlfriend but I tend not to really like to talk about it in public,” Gordon-Levitt said in 2013, declining to name the lucky lady. “The girl that I’m with, she really doesn’t want to be a part of that.”

That’s probably because McCauley isn’t the Hollywood type, but rather the co-founder and CEO of Fellow Robots, a robotics company based at NASA Research Park in Silicon Valley, California.

Private couple, private wedding. Pretty cool, right? Not many working actors can pull off a secret wedding like this, no matter how hard they try. Congrats to Joe and Tasha! 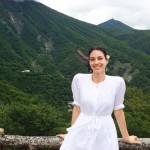