No glove, no love.

Have you ever visited Marilyn Manson’s Instagram page? His self-deprecating selfies and general bitchiness make me laugh so hard. Take the above photo as an example. Manson and Courtney Love had a red-carpet encounter. Courtney, visibly thrilled to see Manson, reaches out for a hug. Manson is all, “Not today, Satan lady.” His caption? “No glove, no love.” (Hilarious.) He also curates a collection of unintentionally PG-13 church signs.

Manson did an interview with Esquire to promote his new album, The Pale Emperor, which came out Tuesday. It’s supposed to be his best effort in over a decade. I’ll probably pick up a copy because one can never have enough theatrical douche rock. Manson covers his Sons of Anarchy stunt casting in this interview. He also talks some serious trash about Courtney and Rose McGowan. He digs Billy Corgan, probably because they’re both bitchy boys:

His acting ambitions: “Well, the only real part was, mostly, Sons of Anarchy. That began with me becoming friends with Shooter Jennings. I was a fan of his music, not knowing that he was a fan of mine, and I met him. Essentially, I just wanted to have a song on the show. It’s my dad’s favorite show. I was literally at my father’s house after my mother died, and the phone call came while I was sitting there at the table talking to my father who was very sick at the time. He had some sort of infection and his legs looked like if he was on Walking Dead. They definitely would’ve killed him two episodes earlier. It was that bad. Then I get a phone call saying, ‘You’re on Sons of Anarchy,’ and I told my dad, and it made him very f***ing happy. The first day, I showed up-the director, Paris [Barclay], he’s black, and I had to say some very racist things in my very first episode. The thing I learned most was I tend to talk a lot with my hands, and I had to sit very still. The direction from Paris was, ‘Just make it all about the moments in between what you say, and it’s all in your face.’ I asked Charlie [Hunnam], because most of my scenes were with him, there was one line where I had to say ‘I miss my dogs,’ and I couldn’t figure out how I wanted to deliver that. He said, ‘Why don’t you just act like you’re crazy, but don’t know it, like in real life?’”

On Courtney Love & Rose McGowan: “[Courtney and I] have always been weird with each other, because she’s slept with pretty much every one of my friends, supposedly. Not me, though. She, one time, told me she was mad at me because I didn’t want to f*** her and I was smarter than her. I said, ‘Well, you kind of proved your own point right there on that one.’ But it was cool. We didn’t work any scenes together [on SoA], but I saw her on the red carpet. Her dress broke, and I said, ‘You okay? Your p**** didn’t show, did it?’ and she said, ‘No,’ and I went, ‘Thank God! That would’ve been horrible!’ That was the only time I f***ed with her. Other than that, I’m cool with Courtney. It was funny, because I ran into Billy [Corgan], and a lot of people think there was some kind of falling out. It was mostly that he wrote a strongly worded letter about how Rose McGowan would ruin my life and ruin my career if I stayed with her, which was good advice, and he wrote it as a letter, which is very polite. There is sort of a guy code that I abide by where he totally offered his advice, and he was genuinely just looking out for my best interests. I hadn’t seen him in 15 years. I had forgotten how close we were, having not seen him in so long. He’s the one who taught me how to play guitar, so if it sucks or it’s good, it’s his fault.”

On inventing the term “grunge”: “Yeah, let me clarify that. I didn’t say I invented the word. I said I coined it, in that I popularized it. I think I actually wrote “grungy.” But it is pretty amusing that that became a headline. I’m like a Furby. You can push me, and then your sound bite comes out, and there you have your headline. So to clarify, I merely claimed that I popularized the word, which is pretty much not accurate, considering the distribution of the periodical that I wrote it in. But I like to self-aggrandize.”

Marilyn Manson actually dropped the words “guy code.” That’s some serious dish about Rose, and I wonder what Billy has against her. He basically stuck his neck out and engineered the breakup, right? Rose didn’t ruin Marilyn’s career at all, but she may have had an effect on director Robert Rodriguez. They hooked up (and destroyed his marriage), and he hasn’t had a hit since then. I’m not saying it’s Rose’s fault, but it is an interesting coincidence.

MM also has a new-ish interview with The Guardian where he talks about his daddy issues. He also wants to have his own children — soon — to pass on the Manson/Warner “legacy.” He talks about “my best friend,” Johnny Depp, as an example of how he wants to parent. Marilyn says he used to change Lily-Rose’s diapers. Manson just can’t stop name dropping the Scarf Monster. Major mancrush city.

Here are some more Marilyn Instagram pics. Y’all know how much I dislike Uncle Terry, so I appreciate Marilyn’s attitude in this photo. 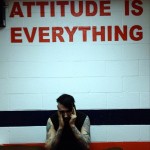 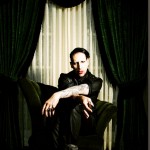 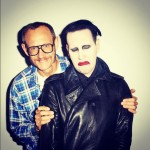