For what it’s worth, Mariah and Brett have been friends for years. And it’s not like they went on vacation – to sunny St. Bart’s – all by themselves. There was an entourage involved, probably on both sides. I’m including some photos of Brett, Mariah and an unidentified woman walking around St. Bart’s this weekend, plus I’m adding some Instagram photos of Brett and Mimi. They don’t seem to be hiding at all. Which makes me wonder if they’re really on. Also note: in the St. Bart’s photos, both Mariah and the unidentified woman are carrying jewelry bags. Did Brett buy them both jewelry gifts?

TMZ’s sources say that Mariah is “over” Nick Cannon and she has already “moved on.” TMZ says they’re staying on a yacht belonging to one of Brett’s friends and the yacht is really nice. They’ve dubbed it “The Love Boat” – go here to see a loved-up-seeming photo. But!! Brett’s rep went to People and said the dating rumors are “ridiculous” and that Brett and Mariah have “been best friends for a very long time.”

Personally, I could see them dating. It would be a hot mess and it would only last a few months, probably. But Mariah is a needy mess and Brett is a starf—ker. If she was throwing herself at him, he would probably take her up on the offer. 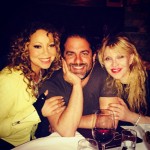 42 Responses to “Mariah Carey & Brett Ratner might be happening: gross or makes sense?”