You’ll have to excuse me from not seeing this conspiracy theory sooner, but I have literally never watched any of 19 Kids and Counting. Over the past few years, I’ve only paid attention to the Duggar family through media coverage of their antics, weddings and babies, which meant that I really only paid attention to Jessa and Jill before the Josh Duggar situation blew up last week. But thanks to some eagle-eyed viewers and the Daily Mail conspiracy theorists, we now have a terrible new story about how Josh’s molestation of at least four of his younger sisters affected the whole family, especially as the sisters reached adulthood. Apparently, Jill pointedly didn’t want Josh to be part of her wedding party and Jessa didn’t invite Josh or his family to be a part of her wedding party.

Fans of the hit show may have missed the biggest sign of discord when Jill Duggar married Derick Dillard on June 21, 2014 at the Cross Church in Springdale Arkansas in front of almost 1,000 guests. Jill, 24, handpicked her eight bridesmaids, which included her sister-in-law Anna, 25, and even her only niece Mackynzie, 5, as a flower girl. Derick, 26, used three Duggar boys as groomsmen, John-David, 25, Joseph, 20, and Jackson, 11. Derick even had little Michael, 3, (Josh and Anna’s eldest son) serve as ring bearer. But Josh was not front and center at the nuptials.

A source close to the family who attended the wedding tells Daily Mail Online: ‘We all thought it was odd that basically everyone of Josh’s family served in some position but he was left out. But no one made a big deal about it. Now it’s making more sense why they wouldn’t want him up there, standing at the altar next to them.’

Things got even more curious when Jessa Duggar married Ben Seewald on November 1, at the First Baptist Church in Bentonville, Ar. Jessa, 22, and Ben, 20, had ten bridesmaids and ten groomsmen in their wedding party, and not a single member of Josh’s immediate family was included. Jessa had sisters Jinger, 21, (as maid of honor) Jana, 25, Jill, and Joy, 17, in her party, with little Jordyn, 6, as flower girl, while Ben invited Joseph, and Josiah, 18, to stand up for him.

There were other signs that something was amiss between the siblings. When the ‘All About Jill’ episode aired (Season 14, episode 13) in October 2014, it featured older brother Josh reminding viewers that ‘perfect’ Jill was basically the family snitch or ‘tattle tale,’ running to their parents Jim Bob, 49, and Michelle 47, with everything they did. On the surface it may have seemed an off the cuff ‘there’s one in every family’ type jibe, but now insiders are wondering if this too was a sign of friction in the Duggar household.

‘The fans feel like they were duped I’m sure,’ says our source, ‘It wasn’t just them, it was friends, all of us. The super-strict courtship and restrictions on the girls always seemed over the top – now it all makes sense.’

From what I understand, Josh was invited to these weddings, like he attended as a guest but he had no formal position, like a groomsman or whatever. Could it be that Jill and Jessa – and perhaps all of the older sisters – still kind of hate Josh? And that comment from Josh about Jill being the “tattle tale” made me sick. It also makes me sick to think that Jim-Bob and Michelle ARE stricter with the daughters who were Josh’s victims. Ugh. 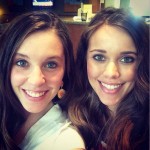