Kim Kardashian: The name ‘South West’ is the ‘stupidest thing ever’ If you remember Kim Kardashian’s first pregnancy, you might remember that it was something of ongoing joke in the tabloids that Kim and Kanye were considering naming their child “North”. Everyone had a good laugh about it and Kim denied the stories outright for months. And then Yeezus and Kim named their daughter North and everyone was like, “Damn, that just happened.” So with this pregnancy, people have been throwing out names like South West, Easton West, etc, because why not? Well, Kim appeared on NPR’s “Wait Wait Don’t Tell Me,” which is a longer conversation than we have time for (the highlight: Why in the world did NPR agree to put Kim on a program?!). She was quizzed about baby names and other stuff. Some highlights:

Being offered the name Kadoul, Sudanese word for south: “I don’t like South West, though, because that’s like – you know, North will always, you know, be better… And be more – she has a better direction….so I wouldn’t do that. I don’t think we’ll go with another direction.

Hearing all of the suggestions of “South West”: “I mean, everyone keeps on saying South, and I think it’s so stupid. Stupidest thing ever and just ridiculous.

“Stupidest thing ever and just ridiculous” – stupider than naming your firstborn child NORTH WEST? More ridiculous than naming your child after a defunct airline? And I don’t even believe her – I think directional names ARE in the mix because the lady doth protest too much. She probably is expecting a boy and they’ll name him Easton Wilde West or something. You can hear Kim’s NPR interview here.

A photo Kim just posted of North’s baptism in Jerusalem. 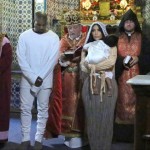 121 Responses to “Kim Kardashian: The name ‘South West’ is the ‘stupidest thing ever’”