It seems like once a year, Paris Hilton buys some new fancy teacup dog breed. No one really knows if these dogs are loved or cared for long-term, but we always seem to know when Paris has just purchased a new puppy, because she takes tons of photos with her “new toy” and then everyone moves on and I suspect Paris moves on too. In 2014, Paris spent $13,000 on a teacup Pomeranian which she named Prince Hilton the Pom. Last year, she bought two more teacup Pomeranians, although she gave one to her mom. She spent $25,000 last year on those two dogs and she named the one she kept Princess Paris Jr. Well, guess what? Paris got another dog. Another teacup breed, another $8,000 for a toy that Paris will only play with for a few weeks.

Puppy love ain’t cheap for Paris Hilton — not when she’s scooping up 12 ounces of chihuahua for $8k … very delicately, of course. TMZ has learned the 4-month-old pup was delivered to Paris in NYC on Monday from a boutique teacup breeder.

Paris is a bit of a connoisseur when it comes to teacup pooches … she spent $25k on two others over a year ago, and bought a teacup Pomeranian in 2014 for $13k. So, if you’re keeping score at home, that’s about $46k on about 5 pounds worth o’ dogs … in 2 years. We’re told the new dog doesn’t have a name yet. Paris is asking her followers to decide on social media, although she’s partial to London or Ibiza. We’re guessing China’s off her short list.

I actually went to Paris’s Instagram to see how many photos of the dog she had posted, and she’s still looking for names. In one of the latest IGs, she writes: “Still trying to figure out the perfect name. Deciding between #DiamondBaby or #LoveBug. Thoughts?” Love Bug is far better than Diamond Baby. But really… no. Breeders need to stop selling to Paris Hilton. This is ridiculous. I mean, sure, the dog is super-cute (like, she’s basically a rat but she’s got a sweet face) but enough! What happened to Paris’s other dogs??? Here’s Paris strutting around with her new toy yesterday: 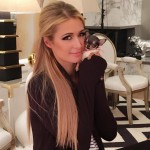 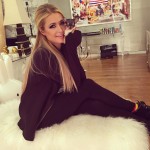