Do you want me to say it? I will, happily. Prince Harry has a great voice and a great laugh. He’s sexy as hell. I know some people are like “if he wasn’t a prince, no one would be attracted to this guy.” I disagree! He’s handsome, he has a great smile, he has a sexy, deep voice and just the right amount of silliness. If he wasn’t a prince, he would already have gotten at least four women pregnant.

Anyway, why am I talking about Harry’s sexiness today? Because @KensingtonRoyal released a new video of Harry talking about the London Marathon, which isn’t being held until next April. Harry is the official patron of the London Marathon, and Heads Together is the official charity of the 2017 marathon. Several months back, Harry and the Cambridges cofounded Heads Together, an umbrella organization that funnels money to a dozen or so mental-health related charities. They released a video about it and everything, and there are several small clips from the old video in this new video. But Harry-talking-to-camera in the blue jacket is new footage. And he laughs!

Got a @LondonMarathon place? Here is a msg from Prince Harry.
If u would like to run for #HeadsTogether sign up here https://t.co/0v2EX639C8 pic.twitter.com/dk2boo2YA5

He is so sexy. Who would have ever thought that he would still be single at 32? I always thought that – no judgment – he would be the kind of man who needs to be with someone, that he would need to be in a relationship to function, because we all know those kinds of men. But now he’s Singleton Harry, the Bridget Jones of the royal family, perhaps permanently unlucky in love. I don’t think Harry has any problems picking up women, but he just has issues with getting them to stick around for any length of time. With that voice and that laugh… I would stick around. The royal guards would have to drag me out of his bed. 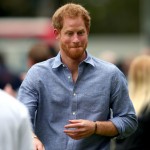