Aaron Taylor Johnson is 26 years old and the father of two, and stepfather of two. His wife, director/artist Sam Taylor Johnson, is 50 years old. They’ve been married for years now, having gotten together when Aaron was 18 years old. I still think that’s sketchy, by the way. It’s not so much the age difference – although 24 years is a big age difference – it’s the difference in life experience when you’re a 42 year old woman getting involved with an 18-year-old. There is something predatory about it, just my opinion. That being said, Aaron seems very happy, especially these days. He’s got a feature in Mr. Porter where he talks about his happiness, his contentment, his feeling of security at home with his wife and daughters. You can read the full piece here. Some highlights.

He’s happy he didn’t get an Oscar nom: “There is a sense of relief. I’m not ungrateful, nor is this spiteful. It’s just that I can’t handle all the attention.”

What he did to get into character for Nocturnal Animals: “I was drinking crate-loads of cheap beer. Chewing ‘dip’ tobacco, that was the worst thing: Copenhagen’s Wintergreen. It builds up the saliva in your mouth so that you spit. Then you have this terrible, rancid kind of breath. My wife wasn’t very pleased with that one either.” In order to embody the loathsome Ray, he chain-smoked, chain-cracked beers, chain-watched documentaries about serial killers and abstained from cutting his fingernails for three months to “feel toxic inside and out”. He was reluctant to bring such dark energy near his wife and children. Once filming wrapped, there was a three-month-long exorcism of Ray. “When you take on that kind of chemistry and psychological damage, you end up carrying it with you, and you can’t quite get rid of as much as you’d like. So I need to detox. And I see these sort of special gifted shaman women, who do reiki and needle work [acupuncture]. I’ve had a bunch of needles in my eyeballs before. I had it done after working with Oliver Stone [as a drug dealer in Savages].”

He stopped drinking a few months ago: “I’m not in AA or NA or any of those things. I can just stop.”

He only likes to do one film a year:“For a good two to three months on the way out of a character. Then the rest of the time I do more earthy things like gardening or cooking or just being with my kids.” He has also landscaped his allotment on the hillside of their garden. “I like my world to be calm. When you deal with this lifestyle [it can drive you crazy]. That’s why I see half of my friends go off the rails. You can really burn it at both ends, get into drink and drugs.”

Fatherhood versus career:“I get more fulfilment from being a father than I do from being an actor. I’m still constantly wanting to give it up.”

His feminism & feminine energies: He admits that, in addition to “a wife, four daughters, two female dogs and three female chickens”, he also has his own female energies. “I’m happy to say I’m a feminist. Being a feminist is just believing in equal rights. Man, woman, gay, straight, black, white – we’re all in it together.” Mr Taylor-Johnson is currently in the process of printing out thumbnails of all the posters from the global women’s march in January to decorate the family bathroom. “When they are young women, they’re going to be ready,” he says of his daughters. “I mean, their mum is one of the strongest, most independent women I know. A role model.”

Flowers: “Mamma got a dozen on Valentine’s Day. The other girls got half a dozen each.”

He doesn’t analyze his relationship with Sam: “I don’t really analyse our relationship. I just know that it works. I just feel secure and loved and safe. We have this very deep connection. We’re just in synch.”

Here’s what I always think when I’m covering Sam and Aaron… if it works, it works and God bless. I wish them well. But there will eventually come a point when Aaron does get reflective about their marriage and their age difference. And I wonder what will happen then. Honestly though, they seem pretty functional. I’d rather deal with a couple like this as opposed to, say, the Affleck-Garners. 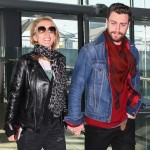