A few weeks ago, Celebitchy, Hecate and I were chatting about… something, I actually forget how the thread began, but it ended up being about how Hecate and I had bad vibes about Shania Twain, and how there was something shady and strange about her that we couldn’t put our fingers on. CB half-defended Shania, but to be clear: Shania was never one of CB’s faves, it’s just that CB didn’t have the same kind of gut-level “what’s up with Shania” vibe that Hecate and I had. Well, now we have a reason for our weird vibes. In a Guardian interview released this weekend, Shania said some problematic words about how she would have voted for Donald Trump if she was an American citizen. Here’s the exact context from The Guardian:

Twain, now 52, is surprising in so many ways – the quietness, the intensity, the mumsiness, the openness, the profanity. But she is not done with surprising just yet. If she could have her time over again, I ask, would she choose what she has now? “I would never choose for my son’s family to be broken,” she says instantly. “I would be one of those people who would keep my marriage together for my child … I tried to keep Mutt.” She says it goes back to her own childhood. “Look at my situation. My parents could have killed each other. Maybe we would have been better off in foster homes, but I decided not to turn my family in, many times. There is something in me that says a family should stay together.”

It is not the only way in which she expresses her conservatism. If she had been able to vote in the US election, she would have plumped for Donald Trump, she says. “I would have voted for him because, even though he was offensive, he seemed honest. Do you want straight or polite? Not that you shouldn’t be able to have both. If I were voting, I just don’t want bullshit. I would have voted for a feeling that it was transparent. And politics has a reputation of not being that, right?”

I literally don’t understand the political/cultural/personal argument she’s making here. The idea that she would vote from Trump because “he seemed honest” – HOW? How did people listen to him at all throughout the course of 2015/16 and NOT think “Good God this guy is a deplorable white supremacist who hates women”? Does he get a bonus point for being so f–king honest about his racism and misogyny? Or nah? Anyway, Shania knew she stepped in it within hours of the interview’s release, because she issued this apology on Twitter:

I would like to apologise to anybody I have offended in a recent interview with the Guardian relating to the American President. The question caught me off guard. As a Canadian, I regret answering this unexpected question without giving my response more context. I am passionately against discrimination of any kind and hope it’s clear from the choices I have made, and the people I stand with, that I do not hold any common moral beliefs with the current President.

I was trying to explain, in response to a question about the election, that my limited understanding was that the President talked to a portion of America like an accessible person they could relate to, as he was NOT a politician. My answer was awkward, but certainly should not be taken as representative of my values nor does it mean I endorse him. I make music to bring people together. My path will always be one of inclusivity, as my history shows.

She apologized because the LGBTQ community dragged her pretty hard on social media, I think. Which brings up a question: what IS Shania’s fanbase at this point? Does she still get hardcore country fans? Because if she does, many of them were probably unoffended by her original words. I’m not trying to paint country music fans all with the same brush, but I do think they’re *more likely* to be Trump supporters (but not all of them, of course). The problem was that Shania was a crossover artist back in the day, so she has/had fans beyond the country-music base. And they were not happy about the interview. Do you buy her explanation? I do not. But whatever, it’s just Shania. We knew she was shady, didn’t we? 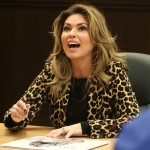