People features Scientologist who came out as gay, had her business ruined by the cult

Gay Ex-Scientologist Michelle LeClair Claims She Was Stalked and Harassed After Leaving the Church https://t.co/AA8QVEkSxi

I’ve been covering Scientology since I started Celebitchy in 2006. Back then, before Leah Remini got out and before Anonymous and Reddit sleuths so thoroughly exposed them, Scientology goons would harrass and ruin people, as seen in several high profile “suicides” of their critics. (They probably still do this, but not to the same extent.) Before we get into this, I would like to give props to an actor named Jason Beghe who spoke out against Scientology ten years ago when it was much more dangerous. (He’s on Chicago P.D. now!) The YouTube videos he recorded helped me understand how smart people can get hoodwinked and lose millions to cults. There’s an urge to dismiss former members as gullible, but that shows a lack of understanding of the psychological tactics they use to pull people in gradually until there’s no escape.

That brings us to the story that covers People this week. A woman named Michelle LeClair has a new book coming out called Perfectly Clear: Escaping Scientology and Fighting for the Woman I Love. It’s the story of how the cult humiliated her and ruined her multi-million dollar insurance business after she tried to come out as gay. She gave millions to the cult, Jason Beghe did too, but she was punished and made an outcast after she admitting that she was gay. She was coerced into marrying a man and living a life she considered a lie. When she finally had the courage to leave, Scientology used the court system to ruin her company. She was ultimately vindicated, but not until she lost everything. Here’s a segment from People’s story, with much more at the source:

LeClair, 45, tells PEOPLE in a new interview for this week’s issue that when she first tried to come out to the church, an official (known within the church as an auditor) gave her writings by Scientology founder L. Ron Hubbard that denounced homosexuality.

“L. Ron Hubbard considered homosexuals and other ‘perverts’ as ‘evil, untrustworthy, a criminal,’ “ LeClair writes in an exclusive excerpt featured in this week’s issue of PEOPLE. “My hands trembled.”

The second time she tried to open up about her sexuality, she was punished, LeClair tells PEOPLE. “I had to go around to all the members inside the church, confess to them what I was thinking, what I was doing. People would look at me in the face and say, ‘You are disgusting.’ ”

“I think I was so confused within myself,” LeClair explains. “I was being taught how to push down those feelings.”

LeClair, who says she faced pressure from the church to marry, eventually wed struggling actor Sean Seward, with whom she had four children: Sage, 17, Savannah, 11, and twins Jadon and London, 9. But their marriage soon soured and later, when she confessed her past attraction to a high school girlfriend with whom she’d had a dalliance, Seward reported it to the church.

“I was ordered to walk the halls of the Scientology Celebrity Centre [in Hollywood] asking random members to read and sign my confession,” LeClair recalls. “I needed 25 signatures to be allowed to rejoin the church. I was so mortified that, after 10 or 15 requests, I ran to the bathroom and sobbed.”

Meanwhile, LeClair’s career was taking off as she founded one of the nation’s most successful woman-owned life insurance firms. LeClair says she donated an estimated $5 million to the church, and after she threatened to withhold further donations, officials finally agreed to let her divorce Seward.

She fell in love with a woman, her current partner, and decided to leave Scientology
“From the moment I decided to publicly leave, my life unspooled as if I were in a suspense novel,” LeClair writes. “Strange cars idled at the curb by my home at all hours of the day. Men wearing dark glasses followed me to the grocery store, my kids’ school. My computer and my phone [were] hacked.”

In her book, LeClair also alleges that the church instigated the state of California to charge her with running a Ponzi scheme, which ultimately led her to shut down her life insurance business and return $1.3 million to more than 40 alleged victims.

LeClair’s legal battle stretched on for six emotionally draining years and left her millions of dollars in debt. But on March 30, 2017, the criminal charges were dropped. “Truth prevailed,” LeClair says. “I was innocent.”

This is not surprising in the least. We’ve heard so many stories like this it’s chilling. Scientology also commits human rights abuses by using slave labor and low paid labor, and Leah Remini has confirmed that they commit child abuse and neglect in their childcare facilities. Just among other books about the cult there’s Leah’s book Troublemaker along with Going Clear, The Unbreakable Miss Lovely, Beyond Belief, Blown for Good, Ruthless and I’m sure I’m forgetting several.

It’s interesting that People just ran a cover about Tom Cruise in July, meant to coincide with MI5, that was generally positive about him. I think that Cruise and his team are going to limit access for People, but except from Top Gun, which will sell itself, he doesn’t have any projects in the pipeline. It’s safe to criticize Scientology again and this will move copies. Hopefully it will put another face on the people who are abused by this cult. LeClair was a highly successful self made businesswoman, she wasn’t some rube. Even if she was, no one deserves to be treated like this.

Grateful for days like these! Reflection, gratefulness, Peace, reconnection and excitement of what’s to come!!! #theaftermath #freedom #peaceful #loveislove #sundance

A post shared by Michelle LeClair (@perfectlyclearthebook) on Sep 2, 2018 at 1:21pm PDT

Came across such a great memory of being with Jane Fonda, @janefondaofficial ,the evening she and #tedturner were honored! @tena.clark and I adore this woman! Not to mention all that Ted Turner has done for this planet! #honored #strength #strongwomen #speakingoutloud 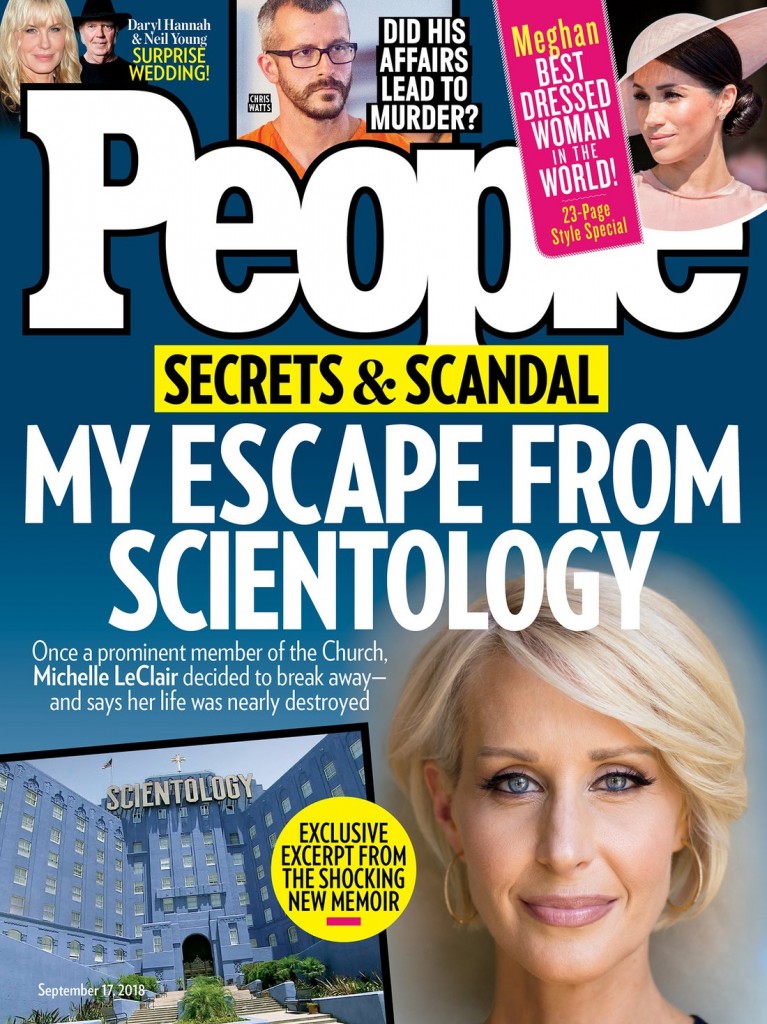 32 Responses to “People features Scientologist who came out as gay, had her business ruined by the cult”