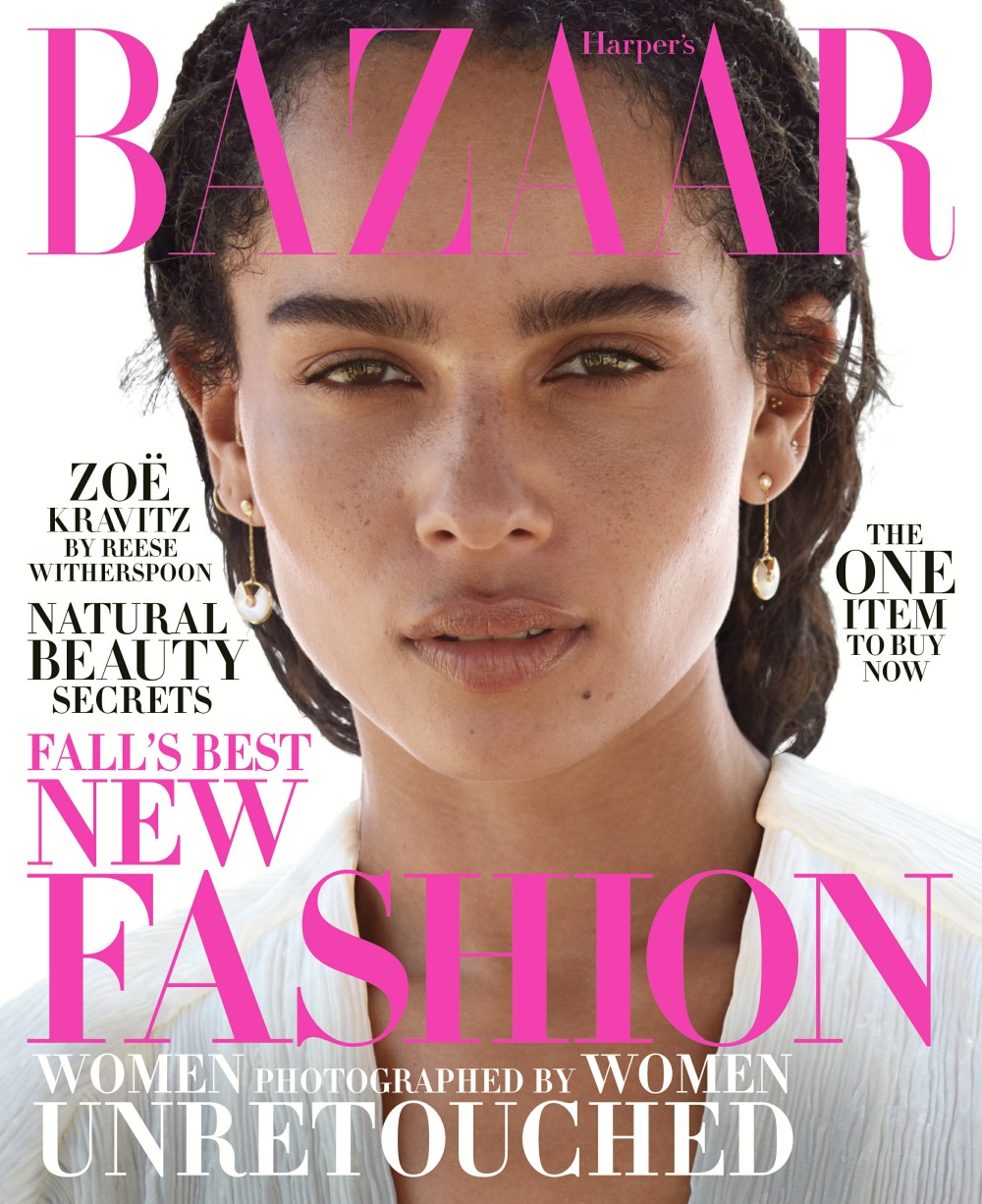 I really can’t wait for the thick, bushy brow to be over. The trend has been happening for years, and I wish there was a new brow trend. That’s all I can think about when I’m looking at Zoe Kravitz’s Harper’s Bazaar cover. Bazaar is making a big deal about how these photos are not retouched, just FYI. Which I believe: Zoe looks like this. She’s gorgeous. Her skin is amazing. Her brows are on trend. She’s hanging out with wolves too. You can read the whole Bazaar piece here, and here are some highlights:

On shooting with wild wolves: “Funnily enough, I grew up with wolves. My mom [Lisa Bonet] loves them. When I was a kid, we had a half-wolf, half-husky and a malamute. I grew up with these big dogs, and they were my pals. So it wasn’t completely foreign to me, which is funny. Now my mom has two wolf dogs. They are like full-on wolves, they live in this big beautiful pen on the property, and she just has this wonderful connection with them. Her relationship with her animals goes way beyond considering them pets. They become her children.”

On appearing completely unretouched for Harper’s BAZAAR: “I was a little scared when they told me. What scared me most was that I was scared about it… [but after retouching] You’re like, ‘That is 100 percent not what I look like!’”

On speaking out against racial stereotyping in Hollywood: “I’m not necessarily trying to point the finger at anyone. I just want to make these writers, most of whom are probably white, aware of the things that affect me and likely affect other people as well. I’m trying to speak my mind and shift things so Hollywood can be more conscious about things. My biggest pet peeve is when I read scripts that have character descriptions like ‘Stacy, 22, perky,’ then you get four pages in and see, ‘Sarah, 22, African-American,’ which makes it clear that everyone else is white.”

On growing up biracial and her grandmother, Roxie Roker’s legacy of inspiring change: “When I got older I realized, ‘Oh, that’s why it was a big deal that my grandmother was married to a white man on the show [The Jeffersons].’ I had mixed parents, so I didn’t see it as a big deal. Then when I was educated about what the world was like, I was like, ‘This is a huge deal.’ It was brave of her to go there. I don’t think her intention was to shake things up. It was actually her truth: She was married to a white man.”

On the pros—and cons—of social media in regard to progressing representation: “Social media connects us in a beautiful way and holds people accountable for their actions, for their decision-making in casting or for an ignorant joke or story line. It’s great that there’s this big responsibility now, but at the same time I feel like social media is really dangerous because it becomes easy to point the finger at things. I think it makes artists afraid to take chances or to play something different than themselves because they’re going to be told that it’s inappropriate. As an actor, I find that scary.”

I have to say that I totally relate to growing up and not realizing that it was notable that my mom is white and my dad was Indian. They were just my parents and I understood that most of the people around me had two white parents, but I just shrugged and thought “well, everybody’s different.” It wasn’t until I was a teenager that I really began to understand how people still had strong feelings about “miscegenation” and the history of those miscegenation laws and more.

As for Zoe talking about the scripts she reads – what’s also offensive about “Stacy, perky” versus “Sarah, African-American” is that white screenwriters treat “African-American” like a character descriptor along the same lines as “perky” or “goth” or “jock.” It speaks volumes about the two-dimensional characters being created. 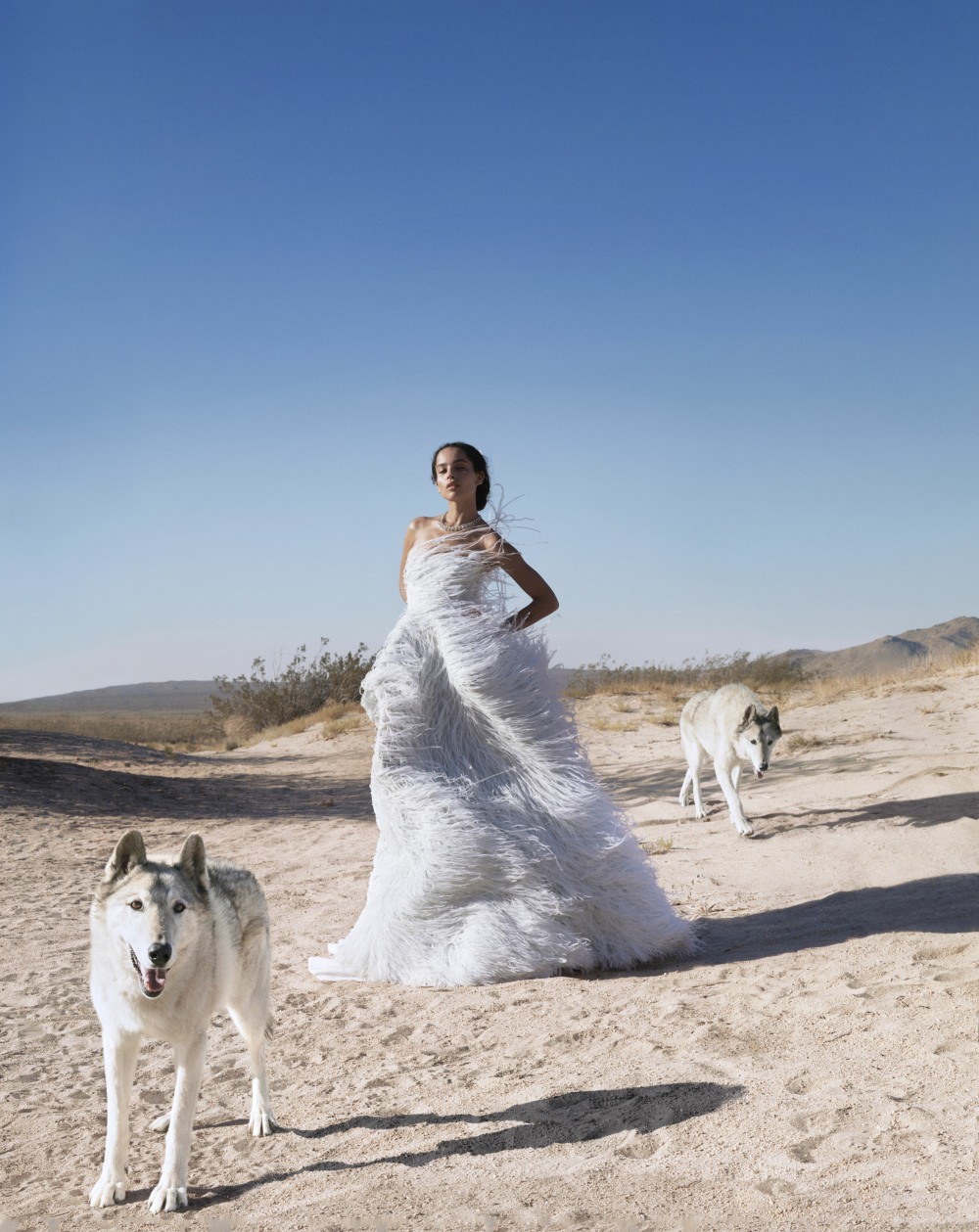