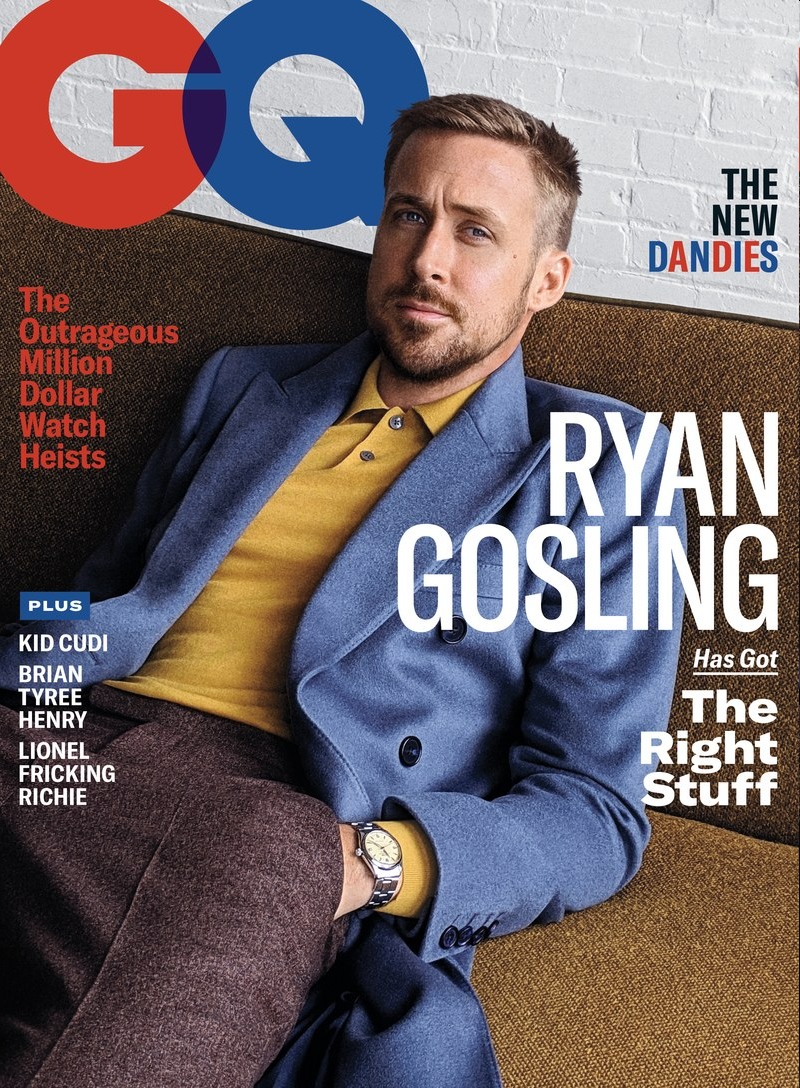 If A Star Is Born has bashed us over the head repeatedly with its early Oscar campaign, I think First Man has basically waged a campaign of gradual gentle nuzzles. The campaign for First Man hasn’t been wall-to-wall. The two stars, Claire Foy and Ryan Gosling, are not big on giving juicy, controversial quotes to media outlets. In fact, the most talkative person on the film is writer-director Damien Chazelle, who absolutely dominates the conversation in Ryan Gosling’s GQ cover profile. Gosling is barely quoted in his own cover story – instead, Chazelle talks endlessly about the space race and the minutiae of getting all of the mid-century details right and all of the technical aspects right too. It’s an interesting read, but again: Gosling is barely heard from. That’s one way to Oscar campaign – just look pretty and barely say anything. You can read the full cover story here. Some highlights:

On working with Chazelle again, just after La La Land: “I think you spend a lot of time being polite in the ﬁrst ﬁlm and respectful of what you imagine the other person’s process is—and so it’s a relief to do a second ﬁlm, I think, because you’re less precious, and you have a shorthand, and you really feel like you can be more honest, and you’re able to really work.”

Showing the astronauts’ home lives: “We were so interested in the duality of their lives, how these astronauts were using their ﬂashlight of scientiﬁc knowledge to explore the vast mysteries of space, and at the same time, they would have to come home and mow the lawn and take out the trash. We had this term for ourselves: ‘the moon and the kitchen sink.’ And I think that was something we really tried to understand, what those extremes might have been like—and to honor that.”

The Space Race was so American, yet it transcended borders: The space race “is so speciﬁcally American,” Gosling notes. And yet it’s a goal that united so many, everywhere on earth. “The amount of hope that it took to achieve this? It sort of permeated the globe, and the world was ﬁlled with this hope that maybe we had just scratched the surface of our potential. I think it imbued the world with this sense of hope for the future that, you know, is really unprecedented.… It’s hard to imagine.…”

Damien Chazelle on what he thinks about the theory that the moon landing could have been faked: “To me it was actually the opposite takeaway. I mean, I remember our crew and I would look at each other: ‘If it’s this hard to literally re-create, like, a ﬁve-minute version of this event 50 years later… To re-create a live stream, basically, of hours of this event in 1969?’ I’m of the mind-set it would’ve been harder to fake this than to actually do it. At that point, you might as well send people off in a rocket.”

I know people who still believe the moon landing was faked. Honestly, some of them make compelling arguments! But I have to say, I find Damien Chazelle’s argument more compelling – what would have been easier at that time, faking that kind of realistic moon landing in a studio and keep it a secret for decades, or just spending billions of dollars with the best and brightest engineers working nonstop for a decade to achieve this massive achievement? Anyway, the GQ piece was interesting, although significantly light on Gosling quotes. Basically, I’m in the mood to browse some mid-Century furniture whilst contemplating the kind of pre-computer math skills needed to go to the moon.

Ryan Gosling's NASA-grade close crop is perfect for his space cowboy role in Damien Chazelle's 'First Man.' Our November cover star fills you in on what it was like to rehearse with g-forces and the laugh he found on the dark side of the moon at the link in bio. (📸 @giampaolosgura)